Sikh History, Through a Distinguished Collection

T he Dalhousie collection, which is offered in the Of Royal and Noble Descent sale on 19 January in London (Lots 1–128), demonstrates the romance, the diligence and the eccentricity of 19th-century India and those extraordinary people who, in our modern day world, seem so alien to us.

THE MARQUESS OF DALHOUSIE PROCEEDING IN STATE TO RETURN THE VISIT OF THE MAHARAJA GULAB SINGH AT CAMP WUZEERABAD ON THE 27 DECEMBER 1851. ESTIMATE £2,000–£3,000.

During the first half of the 19th century India underwent earth shattering changes, especially to the Punjab territories - formerly the Sikh Empire and later annexed by the East India Company. This was a period which produced some of the most enigmatic, eccentric, industrious, hardworking, pious, brave and sometime foolhardy characters in both British and Indian history.

It was a time where the sociology and differences of two vast nations were to work, at times, both harmoniously and as enemies – and quite often in a state of subterfuge with one another. Caught in the middle, and trying to make sense of this merry gathering, was James Andrew Broun-Ramsay, Marquess of Dalhousie (1812-1860), Governor-General of India (1848-1856).

Following an already glowing political career, steeped in trade, commerce and transport, the young Dalhousie (then Lord Ramsay), was appointed Governor-General of India in 1847. It was a position he would hold until 1856, allowing him to develop a keen interest for the wonderful land he was stationed in for almost a decade. The collection presented is rich with influences from across the world, however is particularly poignant for its valuable insights into 19th-century India. Included are a wide range of pictures, drawings, furniture and artefacts which not only give us a glimpse of what life would have been like but also mark the interest which Dalhousie himself had for this exotic land. A perfect example of which is the array of metalwork he amassed - Lots 72–81.

It is fascinating to see further evidence of Dalhousie’s respect for the people of India within these treasured works; both for friend and foe alike. Point in case - the image of Gulab Singh, first Maharaja of Jammu and Kashmir and ally to the British, part of lot 90, whom the Governor met in 1851 or the portrait of General Chattar Singh Attariwalla, lot 70, who fought against the British in the Second Sikh War.

Almost immediately after Dalhousie acceded to his post as Governor-General the Second Sikh War broke (1848–49). Following the death of the fabled father of the Sikh Empire ‘The Lion of the Punjab’ Maharaja Ranjit Singh in 1839 there followed political turmoil in Lahore -  his first legitimate heir was assassinated by poison and Ranjit’s youngest son, Duleep Singh, would become sole remaining heir – however in 1840 the boy was just two.

Soon other immediate members of Duleep’s family were disposed of, in similar fashion, and Duleep’s mother, Maharani Jind Kaur, a highly fascinating and colourful figure, assumed Regency. Through exceptional energy and intelligence she ruled in the boy’s stead, assuring his safety and the loyalty of his people for a time.

Following the war Duleep would eventually be sent to England where he would become a favourite of Queen Victoria and indeed Dalhousie. In his portrait, by Beechey, commissioned by Dalhousie (Lot 255), Duleep is pictured wearing the miniature of the Queen which had been presented to his father Ranjit and sold by Sotheby’s at Colstoun on 21 May 1990.

Dalhousie, sometimes criticised for his role in the rebellion of 1857, is less remembered for the infrastructure he so studiously worked towards. He oversaw the development of transport, the first railway link being created in 1855, communications, reorganisation of medical services and instalment of irrigation. These developments helped commerce and trade, which last to this day, and were praised by those who followed, marking him as important a figure to India’s development as his predecessor Warren Hastings. For further, comprehensive, information on the 1st Marquess of Dalhousie please see the introduction printed in the sale catalogue, or click here.

The Dalhousie collection is one example of the many highly important and distinguished groups offered in Of Royal and Noble Descent. An exhibition opens at Sotheby’s New Bond Street from 13 January and we highly encourage you to come and see this, and the other, fascinating English and European collections. 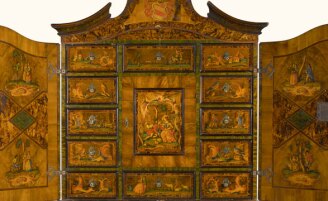