Restoring a Masterpiece in Alabaster: the Master of Rimini

By Sotheby's
The Master of Rimini's Standing Saint, circa 1430 is a highlight of the upcoming auction Master Paintings & Sculpture Day Sale (30 January 2020, New York).

T he Master of Rimini is among the most fabled sculptors of the late Middle Ages. An anonymous 15th-century virtuoso stone carver, he is named after the celebrated alabaster altarpiece formerly in the church of Santa Maria delle Grazie in Rimini. Purchased in Rome in 1913, the magnificent Rimini Altar is now a prized treasure of the Liebieghaus Sculpture Collection in Frankfurt, Germany.

Given its precious scale and the fragility of alabaster, the near-complete survival of the Rimini Altar is remarkable. Single figures and fragments attributed to the master and his workshop are found in public collections across Europe and in the US. In private hands, however, alabaster sculptures by the Rimini Master are very rare. Recently the Getty Museum, Los Angeles, acquired a figure of Saint Philip by the master’s hand (inv. no. 2015.58). Having been restituted to the heirs of Ottmar Strauss, the Saint Philip was sold at Sotheby’s London in December 2014 for more than half a million pounds (£542,500).

It is noteworthy, therefore, that on January 30th Sotheby’s New York will offer another figure of a Saint that is firmly associated with the Rimini Master. Despite the weathering to the surface of the vulnerable stone, the Saint unmistakably displays the sculptor’s characteristic, exceptionally carved drapery patterns. The figure’s prestige is enhanced by the fact that it was once owned by Georg Swarzenski (1876-1957), the art historian who first named the master after the Rimini Altarpiece. While Swarzenski believed the sculptor to have been active in Italy, there is now a scholarly consensus that the master’s alabaster-carving workshop hailed from the Southern Netherlands, the milieu of early painters such as Rogier van der Weyden. Dated to around 1430, the Rimini Altarpiece is considered a work of seminal importance in the development of late medieval sculpture.

The sale of the New York Saint coincides with the imminent completion of the Rimini Altar’s elaborate restoration at the Liebieghaus Sculpture Collection. Begun three years ago as the first major conservation campaign the altarpiece has undergone since the 1960s, the project has required an innovative approach. One aim has been to remove the brittle 20th-century plaster extensions to the cross of the central crucifixion, and thus to restore the altarpiece to its original appearance. Perhaps even more challenging has been the removal of centuries of residues, which had obscured the translucency of the stone. Due to the unique qualities of alabaster, which is considerably more sensitive than other types of sculpted stone, this has been achieved with new methods, such as the use of lasers and a special cellulose flour. When the altarpiece is reinstalled in the museum, it will once more fully showcase its virtuoso carving and the luminosity of its material. 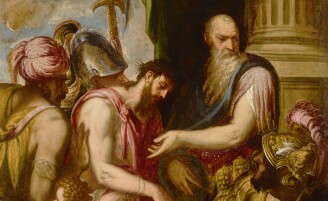 To discover more about the fascinating process of restoring this Gothic masterpiece, we recommend watching this short film by the Liebieghaus Sculpture Collection: