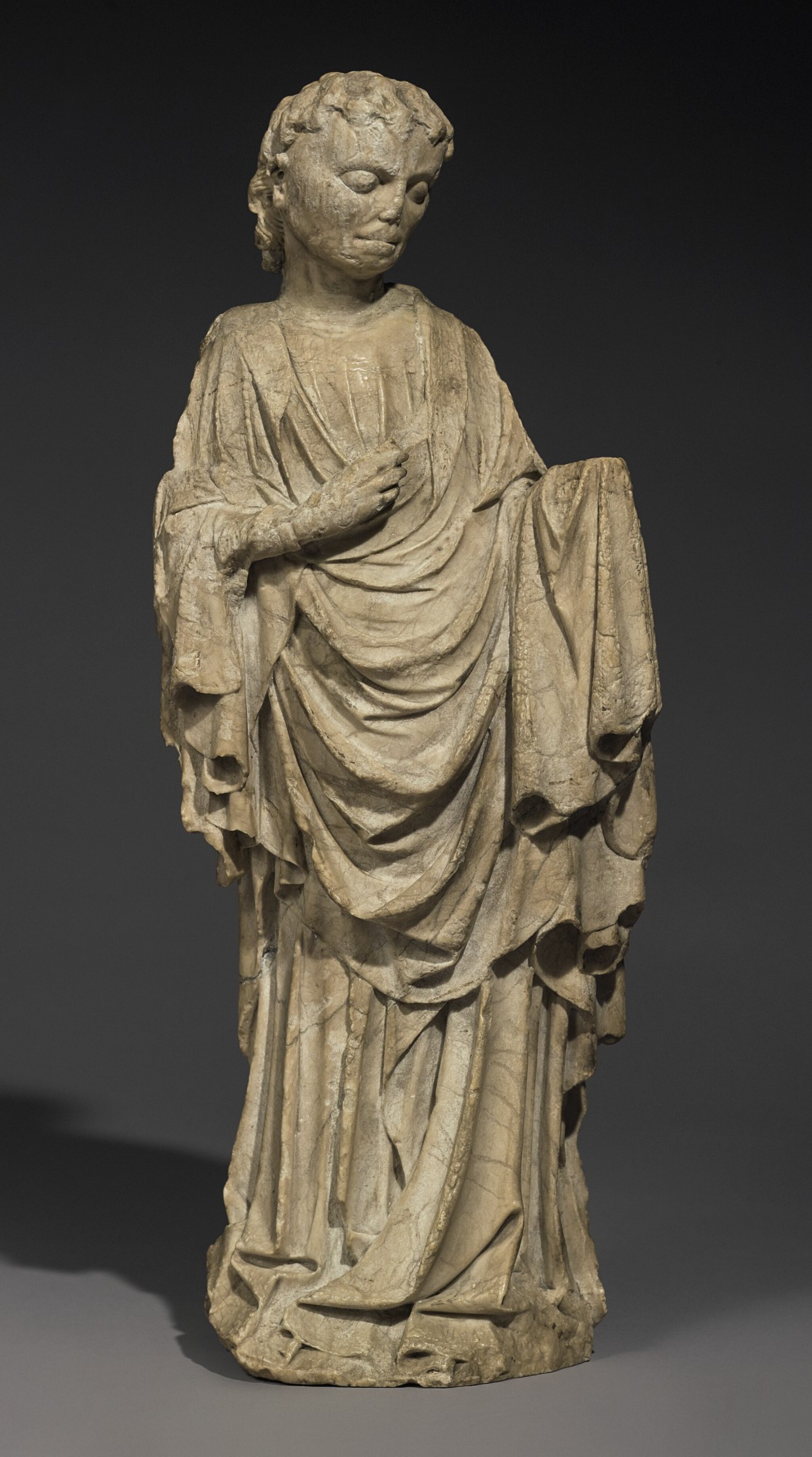 NORTHERN FRENCH OR SOUTHERN NETHERLANDS, CIRCA 1430

Weathering throughout resulting in small losses and chipping throughout including tips of fingers, bridge of nose, upper lip, around base, and edges of drapery. Expertly done restoration to break at neck and upper shoulder area. Inclusions typical of material.

The 'Master of Rimini' was originally named by the noted art historian, Georg Swarzenski (1876-1957), a previous owner of the present statuette, who believed the sculptor was a Cologne master active in Italy. The name derives from an impressive 15th century alabaster Crucifixion altar, formerly in Santa Maria delle Grazie, Rimini now in the Liebieghaus, Frankfurt. Today, there is general consensus that the workshop of this master was situated in Northern France or in the Southern Netherlands and not in Italy. The present figure of a Standing Saint exhibits characteristic features of the Master of Rimini’s crucifixion altar, the Master’s seminal work. The stylistic link between the Master of Rimini’s work and that of his contemporaries from the Low Countries, such as Roger van der Weyden and the Master of Flémalle is further indication of the probable location of the Master’s studio. The faces of the Frankfurt Christ and the Christ in The Trinity by the Master of Flémalle, for example, are similar, as are the alabaster Good Thief in a private collection illustrated by Woods and the famous blindfolded Good Thief in the lost but much copied Descent from the Cross also by the Master of Flémalle. (Williamson, op. cit., p. 187 and Woods, op. cit., pp. 64 and 73, fig. 5). Numerous alabaster quarries and centers for the production of alabaster sculpture were located in the Southern Netherlands and the material was particularly coveted by wealthy citizens in the region.

The Rimini altar is centered by the crucified Christ flanked by the two thieves, with figures of the twelve apostles below. Like the present sensitively carved sculpture, the Frankfurt Apostles are carved with: elaborate patterns of dense drapery folds, heads of square-ish form, prominent bone structure, eyes accented by heavy upper lids and tightly curled hair with each strand emphasized. These affinities to known works by the Master of Rimini provide the basis for the attribution of the present sculpture.

The distinctive drapery on the figure of a Holy woman (fig. 1) in the Metropolitan Museum of Art (Wixom, op. cit., pp. 177 and 178, fig. 216), catalogued as 'Master of Rimini circa 1430', is analogous to the present figure. The Holy woman and the Standing Saint share exceptional carving with refined details. Furthermore, the complex drapery patterns with rhythmic folds and cascades of drapery on the sides of the figures produce an elegant effect. The backs are similarly finished with simple, shallow, vertical folds.

The proliferation of alabaster sculptures from the workshop of the Master of Rimini is illustrative of its status and practices. Sigismondo Pandolfo Malatesta most likely commissioned the Rimini altarpiece which may have been unveiled on the occasion of the Santa Maria delle Grazie's consecration as a Franciscan church in 1430. Another prominent Italian noble family, the Borromini, ordered an altarpiece from the workshop for Isola Bella in Lago Maggiore. The number of large projects and the differences in style between the figures indicates that the Master of Rimini employed numerous assistants and apprentices. That some of these sculptors left the workshop as journeymen or to start their own studios is corroborated by the geographical spread of these works of art throughout Europe.

Kim Woods, 'The Master of Rimini and the tradition of alabaster carving in the early fifteenth-century Netherlands', Nederlands Kunsthistorisch Jaarboek 62, 2012, pp. 56-83;