S otheby's upcoming Important Chinese Art auction promises to be especially colorful, thanks to an array of important ceramics on offer from the esteemed private collection of Blema and H. Arnold Steinberg. Beginning in the 1960s through 2014, the Canadian collectors amassed an impressive selection of fine art and objects, spanning from East to West, ancient to contemporary. This past May, Sotheby's had the honor to sell the Steinberg's remarkable assemblage of Color Field paintings – the finest ever to appear at auction. 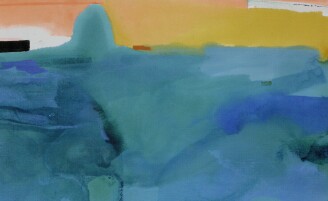 On offer in the 11 September auction, the Steinberg Collection's exceptional grouping of Chinese monochrome ceramics, hailing chiefly from the Qing Dynasty, represents a natural corollary to the transcendent reds, blues, yellows and greens of the collector's Color Field artworks. Below, we've paired a selection of paintings sold from the Steinberg Collection with ceramics in similar hues – seen together, the collection reveals the Steinbergs' discerning eye for pure color and form.

The stemcup is notable for the delicate anhua ('hidden decoration'): the Eight Buddhist Emblems are finely incised onto the smooth white ground, creating a subtle yet striking decorative effect, noticeable only upon close handling. The celadon 'Floral' Bowl harkens back to the coveted blue-green wares of earlier Song-Ming dynasty Longquan kilns; this practice of mimicking Longquan celadons began during the Ming dynasty.

In hues of red and copper, a bowl and stemcup from the collection mirror the cerebral coloring found in Mark Rothko's Untitled (Red on Red), 1969. Top right is a fine copper-red glazed bowl with an exterior glaze of glossy carmine, coalescing to a deep red below the mouth and at the foot. Bottom right is a copper-red glazed stembowl; the exterior of this ceramic is a rich, warm red, while the interior and base have a white glaze.

Copper red glazes proved especially challenging for Chinese potters, due to unpredictability in the kiln. Demand was high, though, as red is associated with happiness and celebration. Given this, potters worked to perfect the glaze during the Qing period.

Yellow glazes held particular significance during the Qianlong Period; sumptuary laws permitted only the Emperor, Empress or Dowager Empress from using ceramics marked by yellow glaze on both the interior and exterior.

Matching the royal blue and deep crimson found in Mark Rothko's Untitled (Red and Burgundy Over Blue), 1969, is a fine copper-red glazed bowl and a fine blue-glazed stembowl.

Cobalt-blue porcelains such as this stembowl were associated with the Tiantan ('Altar of Heaven'). These ceramics were often used in imperial rituals at this altar, leading the glaze to be referred to as jilan ('sacrificial blue'). A similar Yongzheng blue-glazed stembowl can be found at the British Museum and the Musée Guimet. 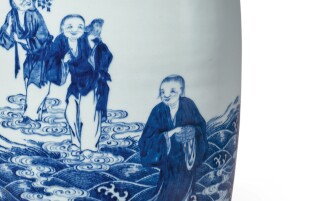 Canadian businessman Arnold Steinberg joined his family's business Steinberg Inc. in 1958. He held various executive positions including Chief Financial Officer and Chief Administrative Officer over the course of three decades. In addition to his very considerable business and philanthropic achievements, particularly in the fields of healthcare and education, he was a major patron of young Canadian artists: by the mid-1980s over 1,500 works by Contemporary artists hung in Steinberg offices in Québec and Ontario.

Blema Steinberg joined McGill University's Department of Political Science in 1961, eventually earning the title of full professor and later Professor Emerita upon her retirement in 2001. Arnold was a longtime supporter of McGill as well and served as Chancellor beginning in 2009. In addition to their passion for collecting, the Steinbergs were devoted philanthropists. including their work through the Blema & Arnold Steinberg Family Foundation.