By Patrick Mauriès
On 25 September, Sotheby’s Saint-Germain-des-Prés sale in Paris will offer a collection of mirrors by the singular and fiercely independent designer Line Vautrin. A designer of both fashion and ornaments, she was without doubt a true sculptor. Author Patrick Mauriès gives us some insight into one of the most brilliant figures of the “esprit Parisien” following World War II, and her poetic mirrors.

B orn into a family of foundry workers in Paris in 1913, Line Vautrin naturally found herself drawn to metal, from designing and sculpting to adding the finishing touches to a piece, polishing, carving and gilding. It was an unusual choice of vocation for a young girl, especially at that time.

But having any doubt in her skill would mean underestimating the fierce independence that would drive and guide her throughout her life. Indeed, she began her journey by knocking on the door of Schiaparelli, another female designer with characteristic determination, only to leave after just a few days, unable to comply with any sort of regulations.

She designed her first collection at the age of twenty-one, offering it in person to a few select customers. But when she presented her creations in a small booth at the 1937 World’s Fair, she took her first step towards becoming renowned in her field. She then opened her first shop, Rue de Berri, where she sold all types of accessories and jewelry: brooches, bracelets, earrings and buttons, not to mention bag clasps and belt buckles.

She moved to a larger shop, Rue du Faubourg Saint-Honoré, in 1946, before leaving the 8th district and having the foresight to invest in the then run-down Marais district. She restored the Mégret de Sérilly building Rue Vieille du Temple, making it into both a workshop, a presentation space, a design studio and a meeting place for her workers.

The 1940s, characterised by a mood of creativity and frivolity which she shared, brought her greater recognition, to the extent that Vogue magazine called her the “poetess of metal” in 1948.

From the 1960s she explored a new creative avenue when she began working with a new material, cellulose acetate. Some fine sheets of resin, laid out in layers, scraped, scarified, worked with fire were inlaid with bits of mirrors, taking the most subtle nuances, evoking schist, the bone and wood corroded by time.

She registered her innovation as “Talosel” and used it to create all kinds of decorative objects – lamp stands, tables, screens and especially mirrors, with which her name is now irrevocably associated.

What distinguishes her work on mirrors was the scale or a focal point. It was a time-consuming process of cutting, inlaying, setting, splitting and diffracting around a dazzling disc, the “miroir ardent” or “sorcerer’s glass” which she used almost exclusively. Line Vautrin had a special interest in alchemy, in the cosmology of which life consists of two primitive substances and develops through contact, opposition, struggle and the assumption of all substances into a whole. Sulphur, heat, aridity and sun on the one hand; bright silver, cold, humidity and moon on the other.

This is the transmutation of a raw material into an “arche”, a shapeless “compost” whose power is revealed through the action of fire; liquefaction and recomposition; the dialectic of fire and water; the mythography of sun and moon. These are the very operations of the manufacture of mirrors which seem to translate, mime or move the alchemical process – an analogy that is strengthened by the shape themes of the objects focusing on stars and the array of constellations. Her mirrors emerged as “the union of fire that melted materials with water represented by the transparency of glass”. 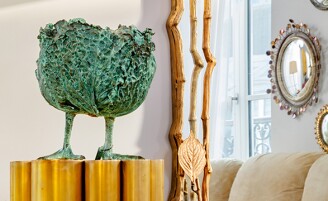