The Elizabeth Pryce Collection – In Tribute to Oceanic Art

I n the early 80s, Elizabeth Pryce discovered an African mask at a collector friend's house in Sydney. The piece had been there for a long time, but she had never paid attention to it. On that day however, she stood in awe and enquired about its provenance. On encountering this particular piece, a passion was ignited. Elizabeth then decided to go along with her friends to one of the auction houses. There she bought her first mask and a line was crossed, Elizabeth had the collector’s bug and although this particular mask has long since been sold off, many other objects followed it into her house.

At the time, she was haunted by a question: was there an objective set of criteria to determine the age of an object? She would soon come to understand that the answer to this question, although never fixed, can only come from a long familiarity with the pieces considered. She started skimming through reference books. She procured the Carl A. Schmitz publication, one of the few then available about the arts of Oceania. Others would follow. Her eye became sharper. Nowadays, she admits, honing the eye to all things Pacific takes time. Objects from this region are never straightforward. Therein lies their charm.

Although her first shock in terms of arts from Africa and Oceania came from an African piece, African objects are rare in Australia. However, there are, for geographical as well as historical reasons, many objects from the Pacific and especially from New Guinea. In 1975, the time for Independence in New Guinea had come, amongst a flurry of cultural effervescence. In villages, ancient objects were still present or still being created by master sculptors. Many Australians stationed in New Guinea gradually left the country. They brought back with them memories, sculptures, old and contemporary, which they sometimes sold on. Sydney galleries made the most this influx of objects on the market.

Elizabeth was a regular visitor of the "New-Guinea Primitive" (the Paulian Society gallery where Chris Boylan and Helen Dennett would eventually work) in the Dymock Building in central Sydney, and of the Senta Taff gallery, in Woollahra, a Sydney district where Leo Fleischmann then officiated. On Saturdays, it was the meeting ground for all art lovers. Pieces were admired and discussions most often took place in the garden behind the gallery. Leo was passionate about books, weapons and body ornamentation from the Pacific. His knowledge about them was boundless and he shared them generously.

Pieces gradually accumulated in the Dymock, originating mostly from the Highlands of New Guinea. A sharp eye was needed, although the best pieces were all presented in a restricted space. For collectors it was a golden era. They were spoiled for choice. It was possible then to collect series of objects, such as these small betel-nut mortars that Elizabeth particularly liked. She pretended her affection was due to her job as a pharmacist. I only half believe it.

Elizabeth admits it: she was lucky to be able to travel. Among the cities she visited, London, Berlin, Amsterdam, Paris, New York. At the Metropolitan Museum, a kwoma painted ceiling made a great impression on her. At the Field Museum, in Chicago, she discovered pieces that entranced her in their invention and elegance, especially boards from the Papuan Gulf. She admired objects from other regions, but some could not be found in Australia, for instance objects from Polynesia.

Gradually her collection grew, but Elizabeth also let go of pieces that no longer convinced her. Her eye changed over time. She discovered new art forms such as the art of the Korewori or the Yuat. Whilst she owned many pieces from other regions, she remained fascinated by the art of New Guinea; its emotional charge, its inventiveness and eloquence. In a word, by its surreality.

In the 1980s, Sydney art lovers resented the fact that the Pacific collections of the Australian Museum were impossible to view, buried as they were in inaccessible reserves. To create momentum, inspire new passions, and attract the attention of young collectors, Elizabeth decided, along with Harry Beran, Eric Coote and others, to found the Oceanic Art Society, of which she became the vice-chair.

Through the foundation, a considerable mass of knowledge about objects was circulated and exchanged. The Society to this day holds exhibitions such as Shields of Melanesia in 2005. The accompanying book would go on to become an important reference, and includes an article written by Elizabeth on the Central Province, and one of the pieces from her collection — a piece from the Green River (Upper Sepik valley) — is in pride of place on the cover.

The market in Sydney remained just as active in the 90s. Bill Evans was a part of it with the Caspian Gallery, Todd Barlin, who often traveled to Western Papua and knew it well, and, more recently, the Thorpes. Elizabeth’s collection flourished thanks to these encounters, gaining significant pieces, including masks and objects of everyday life.

Finally in 2000 she took the leap and traveled to New Guinea. Elizabeth went under the guidance of Helen Dennett, an indefatigable explorer of the Sepik Valley and an insatiable collector of patterns. In Papua New Guinea she met the people, discovered their humour, their smiles. She was captivated and delighted. The group went to Goroka to attend the festival and then on to the Sepik. In Wewak she met Michael Hamson, an unforeseen delight of the journey that gave rise to a lasting friendship. Other surprises were in store for her: great ceremonial houses such as the one in Korogo, and ancient posts such as those found in Palimbei.

She was amazed by the Kwoma houses, especially the one that a famous artist named Gutok - who carved house posts for the Berkeley campus - erected in Tangudjam. The installation of a ceiling from this region, which she had admired at the Metropolitan of New York suddenly made perfect sense, as did other objects from her collection. After a lifetime dedicated to the discovery, passion and sharing of objects from the Pacific, Elizabeth now feels it is time for her objects to go on and enchant other places and art lovers. 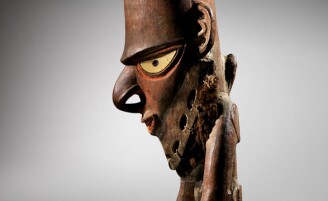