A mong the many masterpieces that the State Tretyakov Gallery brought together for their latest blockbuster exhibition – this time dedicated to perhaps Russia’s most popular painter, Ilya Repin – one work overshadows them all. Hanging at the far end of the huge gallery space on Krimsky Val, the monumental Ceremonial Meeting of the State Council on May 7, 1901 from the collection of the State Russian Museum in St Petersburg is not only impressive because of its sheer size, but because of its compositional complexity, an assemblage of no fewer than 81 individual portraits in a single canvas.

The painting was commissioned to commemorate the ceremonial meeting held to mark the 100th anniversary of the State Council. To complete this major commission, Repin took on two of his students, Ivan Kulikov and Boris Kustodiev, as his assistants. They executed a large number of studies for the painting – 48 portrait studies by Repin alone are known. The portrait of Count Alexei Ignatiev by Kustodiev, widely exhibited during the first decade of the 20th century, including at the 1907 Venice Biennale, will be offered in Sotheby’s Russian Pictures sale on 4 June.

Repin documented the rapid social and political changes that swept through Russia in the late 19th and early 20th centuries like no other artist. Born during the reign of Nicholas I and nearly two decades before the emancipation of serfs, he died in 1930 at his country estate Penaty, by then part of Finland. His subjects ranged from destitute peasants and barge haulers to members of the Imperial Court, and leading intellectuals of the day, including Leo Tolstoy.

Like many artists and intellectuals, Repin reacted with shock and anger to the events of Bloody Sunday in January 1905, when Tsarist troops shot into a crowd of unarmed and peaceful demonstrators. Sympathetic to the February Revolution of 1917 – he painted two portraits of Alexander Kerensky, who posed for him in what used to be Nicholas II’s library at the Winter Palace – Repin refused to return to Russia after the October Revolution, despite the best efforts of the communist regime to win him over to their cause. Even so, Repin never fell from grace during the communist era. 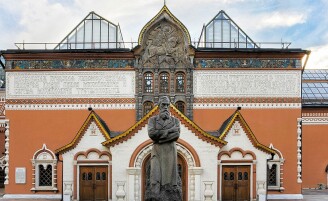 No less than five major exhibitions were held at the Tretyakov Gallery and the Russian Museum between 1924 and 1969, and his social realism was a source of inspiration for the Socialist Realism of the 1930-50s. His paintings of ordinary people were interpreted as proto-communist, and his religious works as well as his official portraits of Imperial Court were re-interpreted along ideological lines. Ceremonial Meeting of the State Council on May 7, 1901 was, for example, seen as an unsympathetic depiction of a coterie of old, corrupt men supporting an autocratic, out-of-touch regime.

By contrast, Repin’s young protégé Kustodiev ended his days in Russia, wheelchair-bound and suffering from tuberculosis of the spine, finding solace in nostalgic depictions of old market towns and their buxom merchants’ wives. He was to die three years before his master in 1927, at just 49 years old.

The Russian Pictures sale also includes a study by Repin for his Procession in an Oak Forest, which is currently on loan to the the Tretyakov. The Repin exhibition runs until 18 August 2019. 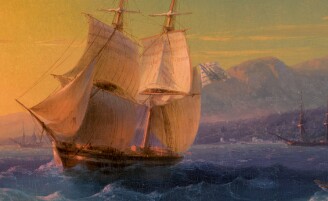