Stozharov and the Russian North

F rom his student days at the Moscow School of Painting, Sculpture and Architecture, Vladimir Stozharov made regular trips to the Russian regions, visiting Yaroslavl, Kostroma, Arkhangelsk and the most remote areas along the Yenisei and Angar rivers, Siberia and Kazakhstan. Gradually these trips inspired in the artist a natural and pressing need to live and work in the wilderness of the Russian North. These distant settlements in an untamed landscape, with their vernacular architecture and warm local people, became a second home for Stozharov and a source of inspiration for his numerous plein air compositions.

His travel companion and fellow artist Gennady Darin recalled: ‘Vladimir Fedorovich initiated many creative trips. He would think them over and carefully prepare for them by choosing a district and an approximate route (…) How did he work! Passionately, selflessly, profusely. From twelve to fourteen hours each day, and up to twenty during the polar nights (…) The weather was never an obstacle for him - he painted in the cold, in the rain and mud. In all of nature’s conditions he could see her charm. Often at a march and carrying a heavy sketchbook, box easel, umbrella and rucksack with snacks and provisions he would walk eight or ten kilometres one-way, then would spend all day painting and return only in the evening. He would do this again the following day and thus many days in a row.’

In the spring and summer of 1956 Stozharov travelled through the Kostroma and Yaroslavl regions painting the architecture, churches and monasteries as well as a number of river landscapes. One of the works in the sale depicts the trading arcades or so-called Gingerbread Rows (Pryanichnye ryady) in the central part of Kostroma. Built at the turn of the 19th century at the initiative of local merchants, these arcades formed part of a larger Gostiny Dvor trading complex with the Saviour Church situated in the centre.

In the autumn of 1956 Stozharov visited a tiny village of Ivshino in the Lyubimsky District of Yaroslavl Oblast. Situated on the banks of the Vonga, a river just 14km long, the village became the subject of a series of atmospheric landscapes.

From the early spring until the late autumn of 1958, Stozharov was again travelling through the Kostroma and Yaroslavl regions. That year he spent most of his time in the tiny villages, painting their wooden architecture and the wild nature surrounding them. Situated on the banks of the Kichenka river in the Danilovsky District, the small village of Glukhovki is a recurring subject in Stozharov’s landscapes from that year.

In the autumn of 1958 Stozharov spent some time in the village of Grigorkovo situated a few kilometres away from Glukhovki. The motif of windmills in Grigorkovo and Glukhovki appears multiple times in the artist’s work from that year as well as in his later compositions. 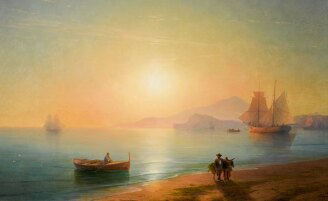