Bogomazov’s life was short and punctuated by tragedy. In the matter of one decade, the Ukrainian painter mastered several art styles, exquisitely displayed in this sale’s selection. The portrait of the unknown man sleeping on a divan, probably from 1910, shows Bogomazov the master technician, a superbly drawn work of a figure seen from an unusual angle. As to the identity of the sitter, the artist Vasily Denisov (1862-1922) with whom Bogomazov was friendly, has been mooted, but the portrait of an unknown in the Ludwig Museum bears perhaps greater similarities.

Two pastel portraits (lots 87 and 88) are relative rarities in the artist’s canon and are usually of the artist’s favourite sitter and muse, his wife Wanda (fig.1). However, according to Kyiv-based art historian, Elena Kashuba, only one conforms to this. The dark eyes and hair buns on the ears were a style typical of the bohemian Wanda who provided a stark contrast to the diffident, bookish Bogomazov. Another drawing, in sanguine, is probably Wanda but certainly drawn post-1913, the year of their marriage and the event that set off the, ‘explosion of creativity’ in the artist, referred to by Kyiv art historian Dmitry Horbachev.

The sitter of the second pastel is unknown but the style is inimitable - dynamic rays of pastel conveying the rhythm and movement with which this artist is associated. It is not so much the identity of the sitter as the effect of its implementation. These portraits coincide or slightly precede, Bogomazov’s treatise, ‘Painting and Elements’, completed in August 1914 - an examination of the relationship between object and viewer and the dynamics of line, a document described as ‘prophetic’ by art historian Andrei Nakov and containing theories such as the totality of the black square, a year before Malevich.

The Street Scene depicting Lvovskaya ulitsa in Kyiv is a seemingly insignificant sketch but heralds a first step on a journey that culminated in Bogomazov’s greatest work, Tramway from 1914. Industrial progress was, for many Futurists, a subject of fascination with its connotations of power and dynamics and Bogomazov was particularly intrigued by the advent of electricity in his hometown.

The funeral scene represents a contrast in the work that reflects the historical context. Whilst Still Life with Lamp is a typical pre-war vignette, showing the artist's studio in Kyiv with a view onto Voznesensky Descent at the base of the lamp, Procession is, appropriately, dark. One of the very few works that the artist completed in 1920, the picture is, like Cart by Bogomazov from the last Sotheby’s sale (fig.2), a reaction to the death of the artist’s father-in-law, Vitold (fig.3).

Another version hangs in the National Art Museum of Ukraine in Kyiv (fig.4) and was described by Simon Hewitt in a 2018 exhibition catalogue devoted to the artist’s work as, ‘one of the most harrowing images of Christian burial ever conceived’. All three works show a radical stylistic change for the artist, moving away from his futurist concepts to a method closer to German Expressionism in its bleakness. The Civil War years in Kyiv were particularly savage, with 11 changes of government between 1918 and 1921 and the death of Vitold was especially poignant for the family. Moreover, Bogomazov had to make the coffin himself and bury it. All this in the year when he was struck down by the tuberculosis that ultimately killed him.

To all intents and purposes, Bogomazov gave up painting until 1925 before moving to a more realist style which was to culminate in the seminal Sawyers triptych, painted in his last years and the work on which the artist concentrated his final energies.

It was only through the ground-breaking work of Elena Kashuba that the entire concept of the triptych was discovered and, even then, not until 2015. The right-hand section, Sharpening the Saws (fig.5), has been, for many years, a central part of the permanent exhibition at the National Art Museum of Ukraine in Kiev whilst a larger panel, The Work of Sawyers (fig.6), lay in storage. Years of neglect had seen the painting suffer considerable paint loss hidden but, in order to coincide with the 2019 exhibition of the artist in his hometown, Alexander Bogomazov: The Creative Laboratory, the painting underwent major, and very successful, restoration.

Elena Kashuba, however, having studied the hundreds of surviving sketches and studies, the majority in the Central Archives of Literature and Art in Kyiv concluded that a third part, Rolling the Logs had been conceived by the artist to create an almost cinematic, story-telling triptych. The script reads as follows; the left hand section - start of the day where the sawyers roll the logs onto their frames prior to the central section – the act of cutting the logs and the final, right-hand section, concludes the story and depicts three sawyers at the end of the day sharpening their tools.

Bogomazov, whose detailed, almost scientific approach to art, had been outlined in his pioneering treatise, approached the Sawyers project with almost missionary zeal, completing well over 300 studies which, as is clearly shown in the offered pictures (lots 93-95), showed an artist veering closer to the accepted art form of the day, Socialist Realism, but using a technique and colour scheme still revolutionary in its nature.

Head of a Sawyer from 1928 does not have an equivalent in the finished triptych but the headgear would seem to suggest that he is the figure in white in the central panel. Hands Gripping a Saw, however, is quite clearly for the figure in dark blue whilst a final watercolour in the series Logs shows the structure upon which the logs were placed before cutting and displays Bogomazov’s almost fauvist colour scheme.

‘The saws rang out like bells,’ Yaroslava, the artist’s daughter later recalled, ’the sap sparkled in the sun. The sawyers looked colossal against the blue sky. My father drew my attention to the way that the colour of the logs changed in the sunlight.’

The oil study for the left-hand panel was never completed, Bogomazov died on 3 June 1930. 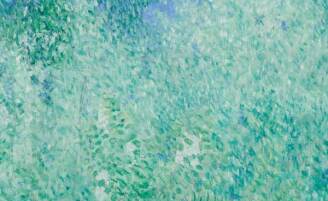