A ccording to the Guggenheim catalogue of the Costakis collection, this painting was one of three oils Kliun exhibited at the 1925 exhibition of the Society of Easel Painters under the heading Works According to the Light-Colour Principle. By the late 1920s however abstraction had fallen out of favour with the Soviet authorities and by 1932 had all but been outlawed with the imposition of Socialist Realism as state policy. Unlike many other artists at the time, Kliun did not turn to figurative art but pursued his experiments in abstraction and purism out of public view. Much of his work was lost during the Second World War when he was evacuated from Moscow and forced to leave the contents of his studio in the careless custodianship of a lodger who used his paintings as firewood.

Costakis, who although born in Russia remained a Greek national and therefore had access to hard currency, began to collect works by the all-but-forgotten artists of the avant-garde in the 1950s. He tracked them down in dusty corners of commission shops and from the surviving artists and their descendants. Kliun was one of the artists he admired most, he considered him to be one of the greatest experimenters of his generation and in the 1960s he finally managed to acquire what works remained from the artist’s daughter Serafima. A number of these, including the present lot, are visible hanging on the wall of the collector’s Moscow apartment in a photograph taken in 1973. Shortly afterwards Costakis was granted permission to leave the USSR in return for the donation of the bulk of his collection to the State Tretyakov Gallery; Spherical Suprematism is one of the very few he took with him when he emigrated not to have ended up in the collection of the State Museum of Contemporary Art in Thessaloniki.

It was then exhibited in exhibitions of the Costakis collection in Düsseldorf in 1977 and at the Guggenheim Museum in 1981 before he sold it at Sotheby's in 1983. 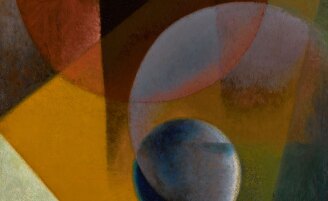