Own the Entire Supreme Skateboard Collection, Now Open for Bidding

By Ross Wilson
Now entering its 25th year, Supreme is currently regarded as one of the leading, and most desired multicultural lifestyle brands on the planet. Fusing the worlds of art, music, sports, political commentary, fashion, controversy alongside a deep-rooted love of New York City, the independent brand has carved out a distinct aesthetic that transcends that of a traditional skateboard company.

S upreme was originally a solitary skateboard store on (the once mainly-deserted) Lafayette Street in Soho, downtown Manhattan. Opening in April 1994, the store’s British-born owner James Jebbia wanted to create a space that the young skateboarders of New York City could use as a hangout to watch skate videos and then hit up the cities various skate spots such as Astor Place and the Brooklyn Banks, while also selling high quality merchandise. Alongside notable skate hardware brands, Supreme also carried their own in-house eponymous clothing line to provide sartorial skateboarders with apparel that was a cut above the standard mass-produced skate brands of the time. The clothing paid homage to the styles New York skaters would wear such as Polo Ralph Lauren, Levi’s and Champion, and was produced in small runs to avoid excess stock. Supreme’s graphics would take inspiration from interests that resonated with their tight-knit crew like punk, reggae, soul, hip hop, art, photography, movies, boxing, designer brands and New York’s underground subculture. The unique difference with Supreme is that they do not wholesale their limited-edition products (with the exception of a small amount available to Rei Kawakubo’s Dover Street Market) therefore creating a highly desirable and lucrative secondary market, due to its inaccessibility to many. 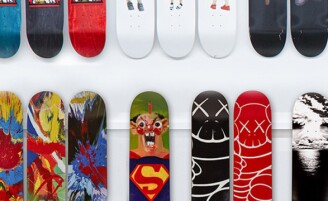 Whereas traditional skate stores were packed wall-to-wall with products, Jebbia wanted to keep his space clean and open – looking more like an art gallery than a store. In the early days clothing was tightly folded and displayed with such meticulous detail that the staff enforced a strict “no touching” policy for the customers. The high ceilings, rectangular shape and glass store front made for an ideal blank canvas to display a wall of skateboard decks, giving each board graphic space to stand out. Supreme saw the beauty and power in skateboard graphics as something other than a disposable commodity so in 1998, four years after opening their doors, they began to release their own designed skate decks.

Starting off simply with their now infamous Box Logo on a plain white deck, New York skaters were keen to represent their local skate store and the debut boards were followed up with the set of four Motion Logo boards (inspired by the opening credits of Martin Scorsese’s 1990 classic mob movie “Goodfellas”), and two ripstop pattern Tiger/Desert camouflage decks. All of these initial Supreme skateboards are now incredibly hard to find as most of those sold were actually used for their intended purpose - skateboarding. Acquiring one of these boards that’s not covered in scratches, chips, or even snapped is almost a myth!

The outlaw nature of skateboarding meant that the small downtown store always attracted counter-culture misfits and creatives from all over the city. Artists such as Rammellzee, Mark Gonzales and Dash Snow would quickly become both friends and collaborators with Supreme, providing both inspiration and artwork for the store and products. With art playing an integral part in Supreme’s output, it was just two years into their own skateboard line that Jebbia called upon New York’s art community to work on board graphics, with Ryan McGinness and his incredible set of five Pantone decks debuting the “Artist Series” in 2000.

With the flat panel of the underside of a skateboard acting as a natural canvas, it was an interesting and alternative medium for artists to work with, especially when spread over a set of decks giving the option to create a larger body of work over multiple items. Over the past 18 years the Supreme’s Artist Series of skateboards has seen James Jebbia (assisted by his friend, the respected art curator Neville Wakefield) work with some of the art world’s most respected and admired talents including Jeff Koons, Richard Prince, George Condo, Marilyn Minter and Damien Hirst. Each skateboard was released in limited numbers and were only available to purchase at one of Supreme’s own retail stores or e-commerce site. Highly coveted and collectible, each of Supreme’s skate decks tells a story and represents a moment in the brand’s quarter-century timeline.

Now on view at Sotheby's and open for bidding online, is the world’s first ever auction of every single Supreme skateboard deck released to the public. The private collection of Los Angeles-based collector Ryan Fuller is the first complete set of all boards spanning the brand’s history, and most likely the only opportunity to purchase the impressive entire back catalogue of decks. With art and skateboarding being Fuller’s two greatest passions, the decks felt like the ultimate items to collect from Supreme but the labor of love took over a decade to complete. Starting his collection in 2008, the hardest challenge was sourcing every deck released between ’98-’08 in good condition. Fuller’s quest connected him to collectors across the globe in countries as far afield as Japan, Australia, South Africa and the United Kingdom in order to track down each piece of this elaborate jigsaw puzzle. The set that was hardest to complete was New York artist Dan Colen’s 2003 ‘Air Jordan’ collection of five boards, as Fuller explains: “I had 4 of the 5 for years and was starting to feel like the last deck I needed from that set just didn’t exist anymore, when suddenly I received an email from a guy I had done business with for years, that he just happened to find it tucked away in his storage. I was on vacation in Hawaii at the time and receiving that email from him was definitely the highlight of my vacation!”

Some standout pieces from the collection include Supreme’s own take on the classic LV monogram that were recalled in 2000 due to a ‘cease and desist’ lawsuit from the French luxury brand, and the official Louis Vuitton collaboration (complete with Boîte skateboard trunk and accessories) from 2017 that saw the two opposing companies come full circle to work together on the ground-breaking project bringing gritty New York skate culture to the Parisian fashion house. Other notable highlights include KAWS and Ryan McGuinness decks signed by the artists themselves, a Japanese-exclusive variation on The Last Supper’s “Jesus” deck and the mythical “FBI” set from 2004.