Nico Pirosmani: The Undiscovered Hero of the Avant-Garde

T he Albertina Museum is currently devoting a comprehensive solo exhibition to the Georgian painter Niko Pirosmani (1862–1918) whose work Georgian Woman Wearing a Lechaki is included in Sotheby’s upcoming sale of Russian Pictures. The autodidact painted radiant and emphatic works that frequently showed animals or scenes from the life of old Georgia and its people. He has come to be viewed as a hero of the avant-garde who deserves to be discovered by audiences today.

The history of modernism is largely one of resistance, of young artists revolting against the academies and the brilliant, yet superficial Salon painting in Paris and Barcelona, Munich and Berlin. The international awakening of modernism aimed for an authentic art. Practicing the art of forgetting, the avant-gardes relied on children’s drawings and the dilettantes’ naïve painting as well as the artistry of the mentally ill and the presumed primitivism of African and Oceanian sculpture for their inspiration.

Born in Tbilisi in 1862, Niko Pirosmani was the most important figure in the line of unlearned ancestors who helped the birth of the early Russian avant-garde’s Neo-Primitivism. What the naïve painter Henri Rousseau, also known as Le Douanier, the customs officer, meant to Picasso, Braque, and Modigliani in Paris, Pirosmani represented in the eyes of the Russian avant-garde. The early art of Chagall, Malevich, Goncharova and Larionov would be unthinkable without the profoundly felt, simple form of the animals and figures Pirosmani always rendered frontally or in rigid profile.

Pirosmani did not live to see his work achieve recognition and success. The lack of understanding in his native Georgia and the outbreak of World War I thwarted further exhibitions. The shop signs and portraits he sold during his lifetime were paid in kind, in wine and food. Impoverished and homeless, Niko Pirosmani died in the damp, cold shack of a cellar tavern in Tbilisi in 1918.

Yet the amateur’s naïve narrative style and simple mode of rendering things, people, and animals inspired and influenced generations of artists, up until now. Picasso likewise admired the iconic beauty and memorable impact of Pirosmani’s painting. Already in his late years, the Spaniard dedicated an etching to the Georgian, and Georg Baselitz contributed a double portrait of Pirosmani and Hokusai. Marking the occasion of the Pirosmani retrospective, the Japanese architect Tadao Ando has dedicated a table sculpture made of blue roses which is shown for the first time at the current exhibition at the Albertina Museum, Vienna, until January 27, 2019.

Georgian Woman Wearing a Lechaki was previously in the collection of the Austrian writer Stefan Zweig (1881-1942), who had acquired it during a visit to Moscow in 1928 for the centenary celebrations of the birth of Leo Tolstoy. This footage shows Zweig making a speech at the Bolshoi Theater in Moscow: 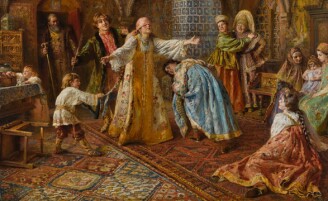