By Sotheby's
I n the world of Mr Doodle odd little characters noodle across the surface, and life is eccentric and light. Such is the artist’s vision of the world in which art brings delight and much needed levity, especially at times when things appear far too serious. And in the rarefied world of fine art, what could be more serious than the works of, say, Leonardo da Vinci , Katsushika Hokusai , Mark Rothko or Sanyu ?

“For the show at Sotheby’s, I took the visual look and theme of visual looks of famous artworks and reimagine them through my doodle lens,” Mr Doodle said in an interview on 4 December. “I tried to represent particular images or ideas, sometimes in an obvious way and other times abstract way, but always through my fun characters.”

Mr Doodle readied his refillable mop markers for a doodle-scale invasion of Sotheby’s Hong Kong. As he set to work, the artist continued to transform the usually spare walls of the S|2 Gallery, adorning the space with dense clusters of characters and patterns that seem to grow and multiply relentlessly. On the walls were finished canvases all mounted askew in spontaneous willy-nilly style. The works themselves were a playful romp through art history: Mona Doodle, Vitruvian Doodle, Whistler’s Doodle, The Garden of Doodley Delights, Guernidoodle, Starry Doodle, and more.

The artist chose what he felt were the most famous and iconic masterworks, so that he could reinterpret popular images. In one of his reinterpretations, Mona Doodle has that same familiar pose and gaze we all know, composed of doodles within doodles. Look closer and soon googly-eyed tortoises or avian creatures emerge spontaneously from her hair or sleeves. There is a crocodile where her hands are usually neatly folded. In Arnolfini Doodle, you will instantly recognize that large hat – and then note Arnolfini’s somber expression (as far as doodles can be somber), the bride’s bulging waist area and pointy hairdo, the dog, and the central mirror that is now a smiley heart face. The referent is so iconic you cannot help but to retrieve those familiar features of the original work from the back recesses of your mind, and it is just very amusing to reexperience the painting in doodle-ized form. In these works, Mr Doodle brings an energy and wit to revered works of art in an exhibition that toys with the boundaries between art and absurdity.

Mr Doodle was born Sam Cox in Kent, England in 1994. He began his artistic career at the tender age of nine, obsessively doodling on sheets and sheets of paper which would cover his entire bedroom. And then when there was no more paper, he would scribble over the surface of any object he could get his hands on. His pen fills every possible space on the canvas with what can only be called “Graffiti Spaghetti,” improvisational creations that can spill over onto furniture, books, subways, clothing and, and just about any surface that could serve as his improvised canvas.

“My characters are all from my head, and I’ve always loved to cover surfaces and clothes and furniture with doodles. Doodle World is my imaginary place where all the characters exist and where they come to life.”


The artist takes inspiration from Walt Disney whose characters and ideas have built worlds of fantasy that have expanded imaginations. Pablo Picasso, Keith Haring, Andy Warhol, Banksy and other graffiti artists, plus a love of video games and comics, have all influenced Mr Doodle’s visual style.

“Doodling isn’t considered a real form of artwork. It’s looked down upon and not considered a highbrow way of making artwork,” Mr Doodle said. “Members of my family or friends still don’t completely understand what I am doing, or how it fits in with traditional art. I don’t really mind it too much, but people thought that what I was doing was not a career, and more a weird sort of hobby. As I became more and more obsessed with it, drawing over my clothes and bits of my furniture, it kept motivating me and driving me forward. When you persistently believing in something, it makes other people believe it too.”

Anyone who watches the artist at work will discover that the doodling is quite spontaneous, oddball characters springing forth with a humor and charm that is infectious. Described by the artist as “Obsessive Compulsive Drawing,” Mr Doodle will be performing live demonstrations of this type of OCD at several Sotheby’s Hong Kong events in December. 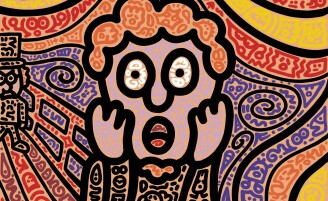 Mr Doodle has worked on furniture, books, trains, clothing, toys, even camper vans. Next year he plans to doodle his entire house and everything inside it. Although these impromptu canvases can be fun, he loves to work in rooms and big immersive spaces where the viewer can step inside and become part of the experience.

“I want to keep doodling bigger things, galleries and spaces,” said Mr Doodle. “I’d like to take over bigger surfaces, eventually maybe a town. That would be amazing.”