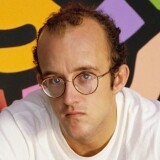 Born 1958. Died 1990.
Interested in selling a work by Keith Haring?
Request an Estimate

Works by Keith Haring at Sotheby's

Born on 4 May, 1958, in Reading, Pennsylvannia, Keith Haring was best known for striking grafitti-inspired drawings that took him from New York City’s streets, subways and clubs to museums and public spaces around the world. Fascinated by cartoon art from an early age, Haring dropped out of the Ivy School of Professional Art in Pittsburgh to move to New York and enroll in the School of Visual Arts in 1978. There, he discovered a thriving art community that was developing outside the gallery and museum world and included fellow emerging artists such as Jean-Michel Basquiat, whom he befriended. Haring created a singular graphic style based on the primacy of the line, peopling it with such signature images as dancing figures, “radiant babies,” barking dogs and flying saucers, and infusing it with uncommon energy and optimism.

After using the city as his canvas – from making countless quick chalk drawings on empty black subway advertising spaces to creating a Crack is Whack mural in Harlem – Haring applied his bold lines and bright colors to freestanding drawings and paintings. Between 1980 and 1989, the artist achieved international recognition, participating in numerous group and solo shows and producing more than 50 public artworks from New York to Paris. By finding a direct means of expressing universal concepts of birth, death, love, sex and war, Haring created a lasting imagery that has been embraced around the world. He died of AIDS-related complications on 16 February 1990. Haring’s works can be found in the collections of many museums including the Art Institute of Chicago, the Albertina, in Vienna, and the Los Angeles County Museum of Art.

According to Sotheby’s Mei Moses, the average compound annual return for Keith Haring resold at auction between 2003 and 2017 was 13.3%, and 91.9% of 74 such works increased in value.

Museum with Works by Keith Haring