Mountbatten: A Recollection on Newhouse by Lord Crathorne

L ord and Lady Brabourne, John and Patricia, moved into Newhouse in 1952 with their sons Norton and Michael-John Knatchbull. The family moved out 65 years later after Patricia’s death in 2017. During that time the family had expanded to seven children and 18 grandchildren. After the boys came Joanna, Amanda, Philip and the twins Nicholas and Timothy. My first visit to Newhouse was in 1954, aged 15, with my parents and my last was just before Patricia died in June 2017 aged 93.

Some background will be helpful. The large estate of Hatch in Kent was bought in 1485 by Richard Knatchbull and has remained in the ownership of the family ever since. The family became one of the leading families in the county. Newhouse became the Dower House after the much larger and grander Mersham-le-Hatch house was built in the park between 1762 and 1766 to the designs of Robert Adam. The family lived in Mersham-le-Hatch until 1933 when John’s parents sailed to India, where John’s father Michael, 5th Lord Brabourne, became the Governor of Bombay. In 1937 he became Governor of Bengal. From June 1938 he was acting Viceroy but sadly died in February 1939 aged 45. Newhouse was tenanted until 1940 and was then requisitioned by the Army for the duration of the Second World War. It was a perfect house for the family. As Patricia wrote it was “a marvellous home for us all; a very cosy and friendly place to be”.

The close friendship between the Dugdale and Knatchbull families dates from 1936. My father’s great friend was ‘Lump’, the Earl of Sligo, a fellow officer in the Royal Scots Greys during the First World War. He owned the beautiful Westport House and large estate in the West of Ireland. Lump’s sister Doreen was married to Lord Brabourne and John Knatchbull was their second son. John stayed often with his much-loved ‘Uncle Lump’.

Mountbatten | The Glamorous World of a Dazzling Dynasty

My father had married my mother Nancy Tennant in 1936 with ‘Lump’ as his best man. When they stayed in Westport House that year, John, aged 12, was also staying. My parents took him fishing with them every day on the Bunowen River which was part of the extensive estate. My father taught John to fish, and he developed a great love of the sport and became a brilliant fisherman. From that early meeting, a friendship of mixed generations developed, my father was 27 years older than John; I was 15 years younger. After John’s marriage to Patricia in 1946 and the arrival of their children my mother and father and then my brother David and I became Godparents to four of them. A testament to the friendship of our families which has continued through five generations is that 21 members of the two families have become Godparents and Godchildren to one another.

John and Patricia were married on 26th October 1946 in Romsey Abbey. Patricia grew up near the Abbey at Broadlands in Hampshire with her parents, Lord Mountbatten and Edwina Ashley, and her sister Pamela. They had met when John became the military ADC to Patricia’s father Lord Mountbatten, in India. Captain Lord Brabourne arrived in Delhi on 12th January 1946 and they married after a short courtship. Married life began in a cottage on the Brabourne estate before moving into Newhouse in 1952.

From the front, Newhouse is a perfect example of how a child would draw a house if asked to do so. A Queen Anne house with the classical symmetry of the time. From the outside its scale makes it look as though the rooms would be substantial. In fact, the rooms feel modest and intimate giving it a welcoming rather than grand atmosphere with vases of flowers from the garden and greenhouse throughout.

The house was a wonderful patchwork of the lives of the family with all the fascinating mementos of their ancestry, and their professional and family lives. In the Drawing Room you might find a Fabergéobject next to a little trinket box from Jaipur or some priceless jade next to a plastic treasure given by one of the children. There was always a blazing fire; it was wonderfully cosy with lots of interesting books - mostly biographies, newspapers old and new and dozens of photographs of family photographs of holidays and marriages.

Staying with them at Newhouse was special with every moment filled with laughter and love. John and Patricia had so many strings to their bows that conversation was always wide-ranging and interesting. Patricia was involved with over 50 charitable organisations, local, national, and international. John’s great passion was films and film making. He went to Oxford University in 1941 for just a few months before joining the Coldstream Guards. He much preferred films to lectures and watched two films a day with a third one as a bonus on Sunday. His life as a producer started in 1950 and during his distinguished career he made over 20 films, working with many of Britain’s greatest actors and directors.

One memorable evening which David and I attended, and which I took part in, was on the 17th September 1990, when Patricia persuaded John, as Chairman of Thames Television, to attend the celebration dinner marking the 200th edition of “This is Your Life”. What he didn’t know was that Michael Aspel would surprise him at the dinner with the famous tap on the shoulder followed by the well-known phrase “Lord Brabourne, This is Your Life”. John was completely taken aback and looked at Patricia rather accusingly, realising that she must have had a big part in the planning of the event and keeping it a secret.

He was delighted to see many friends from the film world who had directed some of his films take part in celebrating his achievements. Franco Zeffirelli, the Director of ‘Romeo and Juliet’, spoke of having “a perfect partnership and creative collaboration” with John. David Puttnam said he regarded John as “the hero and statesman of the British Film Industry”. Sidney Lumet, the Director of ‘Murder on the Orient Express’, said that John’s guests on the set were always varied. “One day a Gamekeeper, the next day a Prince”.

Guests at Newhouse were cosseted and made very comfortable. Evenings were very relaxed with guests enjoying drinks and perusing The Guardian, The Times, The Mirror or indeed the Kent Messenger. The only fixed point was the 10 o’clock news and it always amused me to see the television in John’s Study next to the Drawing Room discreetly hidden beneath a beautiful George II giltwood stand. This was where he would watch all the Oscar and BAFTA nominated films each year as he was a member of both Academies.

The catalogue shows the richness and breadth of the contents of Newhouse, which encapsulates the unique qualities of the British Country House – layer upon layer of history and acquisitions sitting happily side by side. The portraits of ancestors stretch back 500 years and range from the austere to the beautiful. One we all loved was of Jane Monins, wife of Sir John Knatchbull 2nd Baronet. This beautiful three-quarter length portrait was painted by John Michael Wright in 1760 and cost Sir John £15 (lot 38). It was hung in the Drawing Room which was decorated by Patricia’s brother-in-law David Hicks who married Pammy in 1960.

One of the nicest rooms was the wood-panelled Dining Room, small in scale and seating twelve people. The paintings were of particular interest. A portrait sketch of Norton Joseph Knatchbull, freshly entering the navy, has all the penetrating truth and vivacity associated with the greatest American Portraitist of the 18th century (lot 172). This ad vivum study was made for the huge portrait group of the entire Knatchbull family from 1803. Sir Edward Knatchbull commissioned Copley to paint him and his 10 children.

He also wanted his new bride to be included, and rather more surprisingly, insisted that his two previous wives were included too. Copley ingeniously achieved this by elevating them both to the rank of angels! This enormous work was subsequently cut-up to create individual portraits of the sitters. Copley’s original intention can still be judged though, in his monochrome study. This lively sketch was retained by the artist but appeared on the market in the 1920s when it was bought by the family (lot 170).

The Dining Room also contains a series of beautiful pastels by John Russell RA of the Banks family (lots 151-155). These were exhibited at the Royal Academy in 1789 and 1790. Sir Joseph Banks was one of the greatest English naturalists and botanists. He was President of the Royal Society for over 41 years and advisor to King George III on the Royal Botanic Gardens at Kew, credited with making it the world’s pre-eminent botanic garden by his collection of over 30,000 varieties of plants. He took part in Captain James Cook’s remarkable voyage of discovery and scientific expedition to the South Pacific Ocean in HMS Endeavour between 1768 and 1771. The striking portrait of Bank’s mother Sarah Bate, shows her wearing a black dress and a large black hat.

One of the pleasures of being in the Dining Room apart from the paintings was the variety of objects on the table and sideboard – lots of silver items, fine porcelain plates and in the centre a wonderful silver bowl created by Gerald Benney CBE in 1971 (lot 196). Benney was one of the most influential gold and silversmiths and the first British craftsman to hold four Royal Warrants simultaneously. John and Patricia commissioned a large number of items from him. The bowl was commissioned to celebrate their 25th wedding anniversary, the seven swirls of silver leading to a heart in the centre not only represent their 7 children but the fact that John had successfully undergone one of the earliest open heart surgical operations to take place in the United Kingdom.

One of the occasional additions to the table layout was an attractive gold goblet replica of a James I wine cup inscribed ‘Manchester Gold Cup 1951’ (lot 199). The winner was a fine horse called Socrates which was owned jointly by John and my father. Although Socrates won a number of races John decided that making films, although risky, was a better bet than owning horses.

In the 65 years of the family living at Newhouse there was one great tragedy. This took place in August 1979 the details of which are very well known so don’t need repeating here. John and Patricia were determined that life at Newhouse would continue to be as welcoming and as normal as possible following that brutal attack on the family.

What was so inspiring was the way John and Patricia and indeed the whole family dealt with this tragedy. Their courage, lack of bitterness and generosity of spirit was remarkable. They were determined to overcome their injuries and put every ounce of energy into getting better. This was typical of two such exceptional human beings. It has been the great good fortune of my family to have enjoyed this special relationship which continues today. I am delighted to have been asked to make this contribution which I have done with much help from my family. 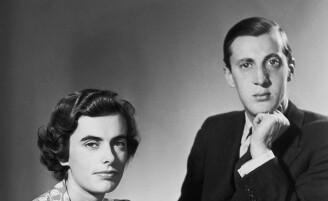 Past Auction
The Family Collection of the late Countess Mountbatten of Burma
24 March 2021 | 10:00 AM GMT | London
Collectors