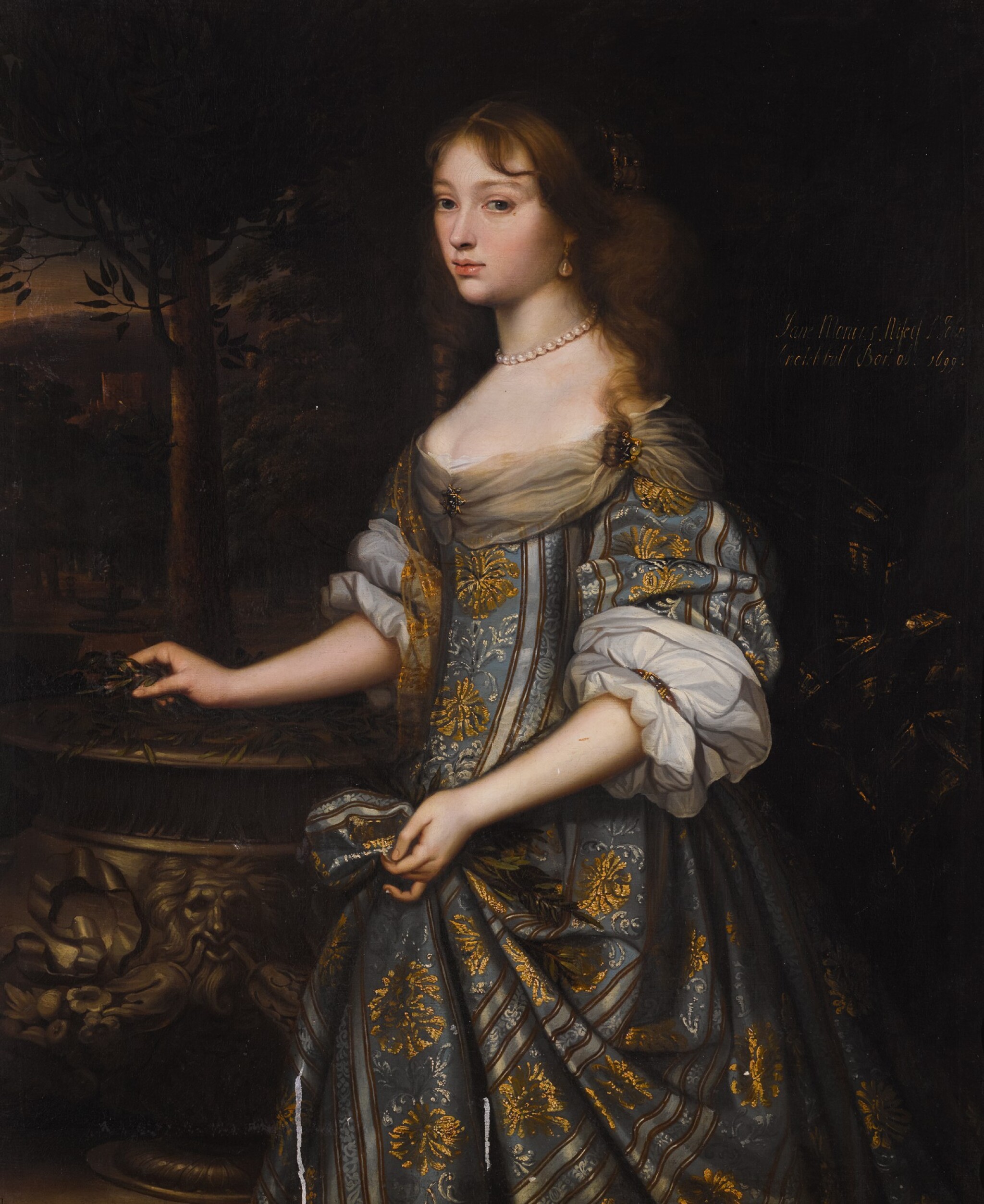 oil on canvas, in a Sunderland carved wood frame

The canvas is lined, and the paint surface is slightly dirty with a very slightly discoloured varnish. There are two vertical scuff marks in the bottom of her dress (visible in the catalogue illustration). Inspection under ultraviolet light reveals a thick and milky varnish, making it difficult to discern intervention. Very few and tiny spots of retouchings are visible in the background and sparsely scattered in her flesh tones. Otherwise the painting appears free of intervention and in very good overall condition.

This beautiful portrait was painted in 1670, and payment for it appears in Sir John’s account book for that year: ’to Mr Wright for my wife’s picture in full £15.00.’ Wright was an unexpected choice for Knatchbull, as the artist was a catholic whilst Knatchbull had known anti-papist sentiments. However, though Lely was becoming well-established at Charles II’s court, Wright had also received significant royal patronage. Moreover in 1670 he was chosen by the Aldermen of the City of London to paint a series of 22 portraits of the judges who had been responsible for sorting out the problems resulting from the Great Fire of London of 1666. This no doubt encouraged Knatchbull to commission this portrait of his wife, and one of himself in armour (private collection).

When this portrait was shown in the seminal exhibition of Wright's work in Edinburgh in 1982 the compilers commented that it was 'one of the most sensitive of all Wright’s female portraits.' Certainly it has a delicacy and sensitivity not always found in Lely’s more flamboyant female portraits, and marks a change in Wright’s style with a smoother and softer treatment of the sitter’s flesh.

Jane Monins was the daughter and co-heir of Sir Edward Monins, 2nd Bt. and his wife Elizabeth, daughter of Sir Thomas Styles, Bt. of Wateringbury, near Maidstone. The Monins family came from East Kent and Jane’s branch lived at Waldershare near Dover. At the age of nineteen, on 17th January 1659, she married Sir John Knatchbull, 2nd Bt., who served as M.P. for New Romney in 1660, and then following his father’s death represented Kent from 1685-87, and after William III’s accession from 1689-95. Her husband played a leading role in Kent as a staunch supporter of William III, and his diary gives a vivid account of that turbulent period.