Into a Boundaryless Future: The Art of Zhang Daqian

‘The Picasso of the East’ – this is the shorthand phrase that often shadows Zhang Daqian, especially in discussions about him in the West. Like Pablo Picasso, he was a chameleon artist, master of an extraordinary range of styles, prodigious of output, marinated in tradition and yet constantly innovative, and an artist whose market value means that he is known far beyond the usual limits of the art world. Zhang and Picasso, two great 20th century masters – and incidentally neither was averse to constructing a public persona for himself. Each was, to use the language of the 21st century, acutely alert to his brand value.

The question is why isn’t Picasso known as the Zhang Daqian of the West?

Here is one thought: the power of the Western art world, which has not suffered the interruptions that its Chinese sibling has, means that it is the West which has often valued artists and given them their place in history. We know almost everything about Pablo Picasso – yet there is no comprehensive biography in English of Zhang Daqian, and it is said that only 5% of what he made has been catalogued. Once that heroic endeavour has been completed, it is hard to imagine how modern Chinese and Western art history might have to be revised. The Louvre collected a piece of Zhang Daqian in the 1930s and during that time his works were included in exhibitions in London and elsewhere. His full influence and importance have yet to be established in the West.

But this may be changing. There is now a general recognition that the world is moving East, and this may well lead to an acknowledgement, beyond specialised academic circles, that Western art owes as much to the East as vice versa. Maybe the Western world will even be obliged to engage more with masters from other traditions. It is commonly said that Zhang Daqian’s glorious splash-ink paintings are indebted to American Abstract Expressionism. If that is the case, so be it; would Zhang Daqian not want to go up against his younger American cousins? But it is equally the case that American Abstractionists are indebted to Eastern art and philosophy: Philip Guston to Buddhism, Robert Motherwell to Chinese ink practice, Franz Kline to Japanese calligraphy – to name but three examples.

Surely it is time in this globalised world that we stop using West and East as if they are two families and one must belong exclusively to one or the other. The great artists have always refused this choice. Just remember that major Western artists Picasso and Henri Matisse both used Chinese ink as a medium, and when Picasso met Zhang Daqian he asked the Chinese master what he thought of his Chinese paintings.

If it is the case that one can be both Western and Eastern, then Zhang Daqian (born in 1899) becomes ‘Our Contemporary’ – a truly global artist, mining the art he needed, wherever it came from. 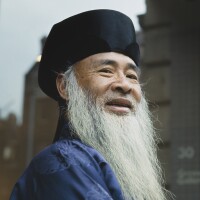 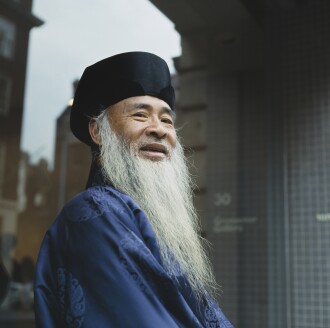 Even his biography attests to his global appetite. As well as China, which he left definitively in 1949, Zhang lived, among other places in Japan, Sao Paolo, and California – journeying in his final years to Taipei. In Tokyo he learnt how to dye textiles, an analogous activity to his use of colour in his splash paintings. In San Paulo he settled in a country which was developing its own modern tradition of abstraction. In California, he would encounter the work of major West coast Abstract Expressionists such as Richard Diebenkorn.

Zhang Daqian’s art loyalties were multiple. We should not dismiss his claim that his splash paintings were indebted to Tang dynasty work, but his omniverousness meant he was routed as well as rooted. In some circles, there is a determination to say that the splash paintings are either abstraction or landscape. The truth is, they are both (which does not seem to be a problem to admirers of Diebenkorn whose abstractions are landscapes and whose landscapes are abstractions).

It was the English poet William Blake who once claimed that ‘without contraries there is no progression’. He might had been speaking about Zhang Daqian – an artist born into a family of Roman Catholics who studied the Buddhist Dunhuang Cave murals with unrivalled intensity; a Chinese artist who saw the multiplicity of traditions within ‘Chinese art’; and an artist who expanded these traditions by injecting what he needed from other traditions.

Zhang Daqiang’s work almost uniquely understands that everything is plural and there are a variety of ways of being loyal to traditions and of being modern.

The institutions of the art world have yet to catch up with him. I imagine Zhang Daqian as a fish that escapes the net of institutional description. He is out there, in the ocean, eluding capture, showing us the way to the future in so much of his work, not least the glorious splash-ink paintings that move beyond those wearying and inadequate categories of ‘East and West’.