A ny biography of Wu Guanzhong would credit the artist as one of the founders of modern Chinese painting, a pioneer who achieved an elegant reconciliation of Chinese ink tradition and Western abstract painting through the synthesis of a continuous exploration of the ink and oil mediums. In his later career, Wu created oil paintings that were daring in their adoption of abstract and Chinese art elements. He ultimately returned to ink painting and moved toward a semi-abstract mode exemplified in his landscape artworks of the 1980s.

Comparisons of Wu's sketches and oil paintings with his later ink reinterpretations offer insight into the artist’s creative and experimental process. Having been part of the first group of Chinese artists to be sent abroad to study by the Ministry of Education in 1947, Wu Guanzhong returned to China three years after, hoping to sketch the country with his new forms of artistic expression. For many years, he wandered through the rich landscapes of mountains and forests, or found himself in small towns, waterways and gardens, always with painting materials in hand so that he could sketch the natural beauty of the south. Later in his career, Wu Guanzhong would revisit many of his older compositions and paint in ink because the fluidity of the medium allowed him to better experiment with his signature technique of “dots, lines, and planes”.

Wu Guanzhong painted the Master of Nets Garden in Suzhou, with a scene of the garden’s pavilion appearing to float over the pond. The approach he took in the 1975 A Garden in Suzhou differs from the oil painting The Wangshi Garden of Suzhou he created two years before. To the right, a handsome shade tree on the yellow artificial rock drapes its wavering long branches and fluttering leaves. This tree depicted is the Lady Banks’ Rose found near the walls outside the Hall of Ten Thousand Volumes. The artist has layered light washes of grey onto the tree, but also dappled green and yellow paint between the shades to create a vibrant interplay of colours. Also sprinkled on the top are staccato dots of green and red that further accentuate the beauty of the plant in full bloom during spring. Overall, the primary subject of the work is the flowering tree whereas the man-made structures serve only to complement the scene.

Wu Guanzhong praised Zhouzhuang as a place that “gathers together the beauty of China’s waterscapes in one place”. He first came to Zhouzhuang in 1985, drafting A View of Zhouzhuang, which he later exhibited at a personal exhibition at the Musée Cernuschi in Paris in 1993, along with two other sketches of China’s Jiangnan region. Residence by the Dock was developed from this particular draft as it seems to have been the only one in the 1980s to have a similar composition to this ink and colour painting. The painting depicts a large house by the side of a river, with its imposing white façade occupying a large portion of the picture and its windows and doorways reduced to small dark blocks. The wall has been divided by black and white planes, providing a strong sense of contrast in a manner similar to another of Wu’s classic depictions of China’s Jiangnan region, A Pair of Swallows. The stillness of the walls together with the movement of the boats perfectly encapsulate the essence of a waterfront town.

Wu had been painting the Lu Xun’s Hometown series since the 1960s, decidedly switching from figurative to landscape work due to the political climate of the time. The series pays tribute to the author Lu Xun whilst allowing the artist to premier new techniques of modelling the localities of the Jiangnan region. The painting depicts the beauty of the densely packed black and white blocks that make up one corner of the town, with the whitewashed walls and dark tiled roofs of houses stacked tightly one on top of another like the scales of a fish. Moving further into the picture plane, the well-defined outlines of buildings become compressed into dark blocks before gradually shifting into Cubism-like abstraction. The artist populates the painting’s airtight composition with a steady stream of people, ancient flagstone streets, riverside willows and stone bridges leading into bylanes, loosening some of the visual density and retaining a semblance of the more representational aspects of the work’s primary subject.

Compositions of Residences by the River in Suzhou

In the spring of 1980, the artist led a group of students on a trip to Suzhou. Residences by the River was developed from a sketch made on this trip. The painting’s clustered willows and densely intertwined branches are rendered in thick ink, conveying the unique flexibility of the plant. The emerging buds of red and green that dot the tips of twigs as well as the playful ducks in the water are are emblematic of nature’s restored vitality upon spring’s arrival. Buildings can be seen scattered behind the covering of leaves and branches, their clean walls framed by black eaves and window lattices. Though not the central focus of the painting, the pure white of the buildings counterbalances the greens of the spring willows. The image’s compact and self-contained layering is truly a testament to the compositional genius of the artist.

From his visit to Suzhou, Wu began to paint the scenes of Jiangnan’s waterway and alleys, depicting ancient towns with quiet activity. Using his preparatory sketch of Suzhou’s Shantang river, he later created many works of similar themes and compositions. White-walled houses with black-tiled roofs line the flowing waterway. A bridge witnesses the comings and going of people in brightly colored garb who are either walking in the alleys or paddling their boats. These have all become fixtures of Wu Guanzhong’s oeuvre. Furthermore, the triangular roofs, elongated river and curved arch under the bridge all make up the lines and shapes of Wu's beauty of forms.

In the ancient Jietai Temple, Beijing, there is a remarkable 1000-year-old pine that measures close to three meters in circumference and more than ten meters in length, with a trunk that extends through the stone balustrade and grows horizontally, resembling a crouching dragon. Known as the “Reclining Dragon Pine”, this dynamic looking tree was among Wu Guanzhong’s favourite subjects. In 1988, the artist attempted an abstract version of this pine in the painting Reclining Pine. Five years later, he returned to the temple to make a quick sketch of the tree, which he then turned into the large painting The Dragon Pine. In this later rendition, the pine has become more defined. Its scaly bark covered with lichens, pointed needles stark as iron rods, and bursting dots of colour. The background is highlighted only by a few mist bands, and the foreground is reserved entirely for the twisting plant. While its majestic trunk depicted in sweeping strokes of charcoal-black ink thrusts diagonally from the lower left with such force, the smaller branches also bristle with energy and twist dramatically in all directions. Indeed, the pine in the hands of the artist has mutated into a writhing dragon with grasping claws, waiting for the moment to surge up into the sky.

For years, Wu Guanzhong had been captivated by a vine-covered wall in Suzhou’s Lingering Garden, preoccupied by the relationship between “wall and vines”. In early works such as Vines on the Wall, the plant still remains confined to the white wall itself. Later, however, the artist would break free from its confines and let the long vines roam free on the paper. This breakthrough is also closely linked to the larger artistic concept behind Wu’s iconic abstract pictorial language from the 1990s. In Climbing Vines on Wall, the twisting Boston ivy that extends across the surface, joined by the smaller tendrils that appear cascading down the wall as if the plant is bursting with the energy of early spring. Such a dynamic composition foreshadows his later works in which the artist treats the entire picture plane as the wall per se. As for the lower register, the wall bricks of varying sizes press against each other and exhibit a sort of somewhat deformed beauty that pertains to geometric forms. On a single surface, the artist managed to work wonders and render the same subject of walls in two starkly different modes.

After several wet and gloomy days spent in the foothills of Mount Yulong in 1978, Wu was inspired to paint the stream running beneath the mountain. It is illuminating to compare a quick sketch he made in 1978 with a painting created much later that elaborated on his earlier observations. The Running Stream of Mount Yulong depicts a stream stretching through the foothills of a gloomy and indistinct mountain ridge covered in an ashen snow. Several pine trees appear sparse, their branches gesturing upward like the hands of dancers. The waters of the river snake across the sands of the riverbank, a brilliant snow white against the grey tones that dominate the image, as Mount Yulong appears in the distance at the stream's source. Several of the artist’s works from around 1988 make use of a similar compositional structure and it is likely that this painting was also produced in this same period.

Since 1970, Wu Guanzhong would travel to Sichuan, Guilin in Guangxi, and to the mountainous regions to the west of Hunan to see rice paddy fields. Their pools of water reflect the light so brightly that they appear to form a spectacular field of mirrors fields, showing the subtleties of light from the sky. He produced many paintings of paddy fields, some in oil and some in ink. The Paddy Fields dated 1986 represents a breakthrough in the artist’s composition. Capitalizing on the unique qualities of ink and water, Wu steered his brush on the paper to create uninhibited colourful lines resonant with the distinctive contours of the paddy fields. The farmers, depicted as speckles of colours, move to and fro across the white plateaus. These terraced fields present a wide horizon as though captured through a bird’s-eye view. The artist has gone beyond merely sketching from life, reaching the culmination of his rich plein air experience and daring experimentation.

In the spring of 1989, the Seibu department store chain invited Wu Guanzhong to Paris to sketch the city. This was for an exhibition that was to be held in Japan. It had been close to 40 years since his last visit. Due to a tight time schedule the artist mainly produced a series of quick sketches which he would later develop into oil paintings for the exhibition. Many of these sketches, such as this one, were of the river Seine. In the painting, the pedestrians walk along a long, narrow embankment between tall trees, indicating that the sketch is a depiction of L’île aux Cygnes, a man-made island with small, shaded walkways for residents to stroll along. The riverbanks are lined with tall, modernist buildings in favour of Renaissance style structures, showcasing the beauty of modern architecture and the fresh look of the old capital. 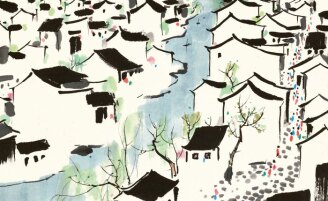