Interview: The Life and Work of Nikritin

The upcoming Russian Pictures sale in London on 6 June features five lots by the Ukrainian painter and avant-garde artist Solomon Borisovich Nikritin. Ahead of the auction, Sotheby’s senior international specialist Frances Asquith spoke to Tatiana Frenkel, the artist’s great-niece, to find out her memories of the artist and his work.

Frances Asquith: We have seen two major retrospectives of your great-uncle’s work recently - in 2004 at the State Museum of Contemporary Art at Thessaloniki and in 2007 at the State Tretyakov Gallery in Moscow. How did your family feel at the opening of these exhibitions?

Before I saw any personal exhibitions of Nikritin’s outside of Russia, I saw his work Man and Cloud at the 1992 Great Utopia Guggenheim Museum exhibition. We had just come to America a couple years before. I was living in NYC at the time and had no idea that Solomon’s painting was hanging anywhere, let alone at the Guggenheim! I remember bursting out crying after suddenly seeing his painting one day while walking around the Guggenheim! Even now, 20 years later, I come close to tears when thinking about that moment.

The majority of Nikritin’s paintings were bought by George Costakis after the artist’s death. On the other hand, during his lifetime, Nikritin hardly earned any money and his wife had to support him. He and his wife lived in a 160-square-foot room, sharing a kitchen and a bathroom with three other families. Solomon did not have his own study, so while he painted in their room, his wife had to stay in the kitchen shared by them and the three other families. His fourth personal exhibition took place in 1956 (28 years after the third one) only after he wrote a letter to Khrushchev, then First Secretary of the Communist Party of the Soviet Union, about the difficulties which he had endured as an avant-garde painter during Stalinist times. After his death, his wife devoted the rest of her life to his legacy. She donated some of his paintings to the most prominent museums of Moscow and St Petersburg, hoping that one day there would be an exhibition dedicated to his work. The saddest part to me is that neither he nor his wife saw his painting at the Guggenheim Museum in NYC, although I am so thankful I happened to see his painting that day 20 years ago.

When I heard about the 2004 Thessaloniki exhibition, I was very excited to attend. It was a combined exhibition, with works from both the State Museum of Contemporary Art and the Tretyakov Gallery. The opening night really exceeded my expectations. Firstly, I saw many impressive paintings and graphic works for the first time (Farewell to the Dead, Man With High Crowned Hat, Screaming Woman, Drinking Woman, Man and Cloud and Triumph of the Citizens being some of them). Moreover, there was a touching, heart-wrenching performance by a Thessaloniki theatrical group in a projectionist-like style that made me see the respect the curators had towards Nikritin. After that performance and exhibition, I truly realised how magnificent an artist Nikritin is and was. His widow, Dora, told me that he once said to her, “Don’t worry, one day my paintings will be exhibited in all the best museums of the world.” I remembered that during the exhibition. On the other hand, we were not informed about his 2007 personal exhibition at the Tretyakov Gallery. No catalogue was available either.

Frances Asquith: What are the main memories of Solomon Nikritin which have passed down through your family?

I was a little girl when Solomon passed away, so unfortunately I don’t remember much about him. But I do remember that whenever we visited him and his wife, he always sat in the corner drawing sketches of us or just listening to our conversation. My mom, who knew him much more than I, says that he was very quiet. He was not snobby; he was just the type that didn’t like talking for the sake of it. He could always add something useful or interesting to conversations, otherwise, he stayed out of them. Nevertheless, he was polite to everyone, even those he didn’t like. My mom remembers that he often used to take her to the movie theater to see movies. He had a very good sense of humour, and could make my mother laugh very easily, but rarely laughed himself. He was very modest, both in his family life and his artistic career and circle. Dora used to say that Solomon was never pushy about selling his paintings. But a stunning example of Nikritin’s selflessness is when his artist friend, Redko, died. Solomon tried his best to arrange an exhibition on Kliment Redko to be able to better sell some of Redko’s works to bring Redko’s widow some extra income.

In the early 1930s, Dora and Solomon lived in a 40-square-foot room, sharing a bathroom and kitchen with many other families. There was no space for him to work here, and as a result, he spent nearly all his days in his mother’s room. It was only after his mother’s death that he and Dora could exchange those two rooms for the 160-square-foot room, where they still shared a bathroom and kitchen with three other families. Actually, the living space of the room was even less than 160 square feet, because at least a third of it was occupied by the canvases, that were pressed to the wall by three or four cast-iron irons. All the furniture was shabby, they had only one couch, but I don’t know how they could sleep there, because its springs were out.

Frances Asquith: A number of the paintings we are offering in the Russian Pictures sale on 6 June date from the 1950s, a difficult period in the Soviet Union for many of its people, including artists. Did Nikritin record what it was like to be an artist at that time?

At the beginning of the Communist Revolution, he was very devoted to its ideas. As time passed, and although he tried to paint everything in a positive light in his personal diaries, he created works such as People’s Court (1934) that elicits a feeling of horror on the part of the viewer about that time period. He had a great start when Anatoly Lunacharsky, the Minister of Culture, and Maxim Gorky, the writer, helped to get him on his feet. Eventually, though, he had to stop his avant-garde and experimental work because of the criticism that his peers and newspapers delivered after he unveiled The Old and the New in 1935. He realised that in order to survive, he had to adapt to the times, and he did just that. Still, the whole family was relieved that he was not imprisoned during Stalin’s time.

As mentioned before, Dora and Solomon survived only on her meagre income. As a result, some of his pieces were done on the reverse side of documents that Dora brought home from work for him to use. At the June 6 sale, there is a painting of a tree made on the reverse side of his own painting (Lot 124, A Lone Tree). Solomon and his wife could only afford inexpensive trips to the Crimea. Moreover, because Solomon was soft-spoken and never asked for attention, he didn’t reap the rewards he could have if he were more demanding. At the same time, he never doubted that his art would be known in the future.

Frances Asquith:  Our sale includes two views of Moscow. Nikritin was not born there but spent most of his life in the Russian capital. What do you think Moscow meant to him? Did he have a positive or negative relationship with the city and how did it influence his work in your view?

Solomon was born in Kiev, and in 1918 moved to Moscow, where he spent the rest of his life. He wanted to move to Leningrad, but was never given work there, and Soviet citizens were not allowed to move to different parts of Russia without proof of work there. I don’t know if he really liked Moscow or not, but he did spend most of his life there, and Moscow is in multiple of his paintings, graphic works and sketches. Moreover, he did have a Moscow accent.

Frances Asquith:  Your great-uncle was one of the favourite artists of the legendary collector, George Costakis, who was well-versed in the early Russian avant-garde. Nikritin of course studied under Alexandra Exter in Kiev and later under Wassily Kandinsky and David Sterenberg in VKhUTEMAS, and in 1922 he participated in the First Russian Art Exhibition in the Gallery van Diemen in Berlin alongside Kazimir Malevich, Alexander Archipenko, El Lissitzky, Nathan Altman and others. Which of these artistic influences are you most aware of in his work?

Costakis loved Nikritin’s work and took most of it with him when he left Moscow for Greece. As for influences, I agree with you about Shterenberg , but I am also thinking about Malevich (Black Quadrant and Black Quadrant with A White Object) and Chagall (Nikritin’s village sketches).

The Russian Pictures sale is in London on 6 June. 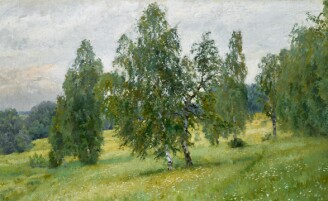