Graff Jewels: A World of Colour

L aurence Graff is, quite rightly, known as ‘the King of Diamonds’ but that doesn’t mean his jewelry isn’t often imbued with the bright, enticing colours of other gemstones, such as emeralds, rubies and sapphires. Each of these stones hold their own place within the storied history of jewelry, discovered centuries (and even millennia) ago and coveted and feted by early civilisations, royalty and celebrity alike. A sale of Graff pieces entitled Graff: Contrast & Colour focuses on these luscious gems, with each piece set with customary flair to highlight and celebrate their intensity of hue and exceptional quality.

The emerald has enjoyed a resurgence in popularity of late (driven in part by large deposits found in Zambia), but this stone’s first discovery dates back nearly 4000 years to Egypt where the raw crystals were believed to be gifts from the gods. The Ancient Egyptians and Romans thought they were sacred, while green’s close association with nature meant its symbolism extended to re-birth, growth and fertility.

Millennia later emeralds were mined in Colombia in territory seized by the Spanish Conquistadors; they gifted emeralds to the Indian Mughals in order to carry favour in the sub-continent. As a result the stone became highly prized in India, more so than diamonds, while the skill of emerald carving became an Indian speciality that still remains today.

Many famous emeralds dot the timeline of human civilisation, such is their draw and power over the human conscience, from the royal jewels of Catherine the Great and Empress Josephine to Wallis Simpson’s engagement ring and Elizabeth Taylor’s emerald parure gifted to her by Richard Burton in 1962. From the 14 lots containing emeralds in this sale all present with a similarly bewitching hue – from a pair of floral earrings that tumble from the lobes (lot 43) to the graphic purity of design in the earrings of lot 45.

Although we are often led to believe that diamonds are the rarest stone, in fact rubies are rarer and increasingly record-breaking at auction. Historically their powers were believed to be magical – it’s known that Ancient Burmese warriors embedded rubies under their skin thinking they would make them invisible in battle. Their protective qualities were thought to be powerful – and even today in some cultures a ruby is laid beneath the foundations of a house to protect the occupants. 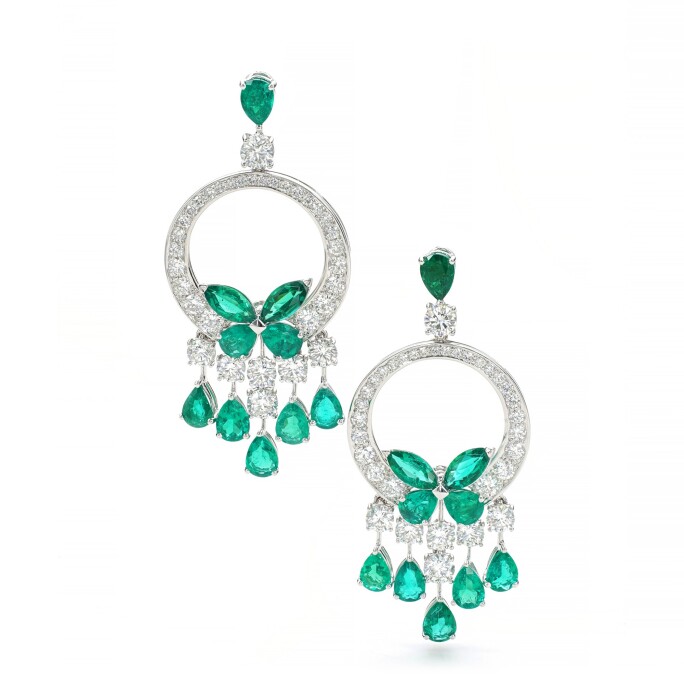 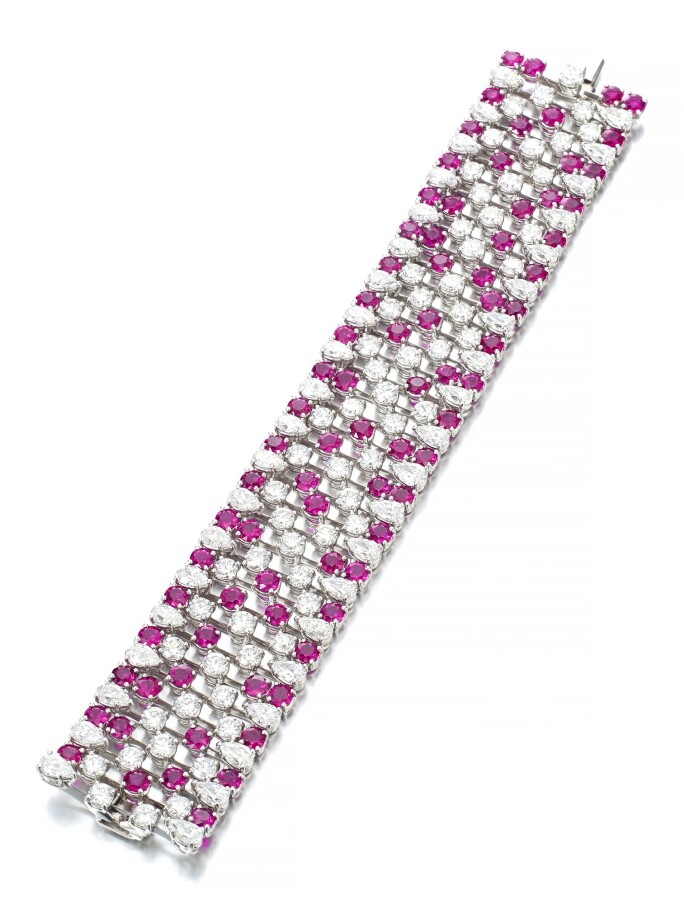 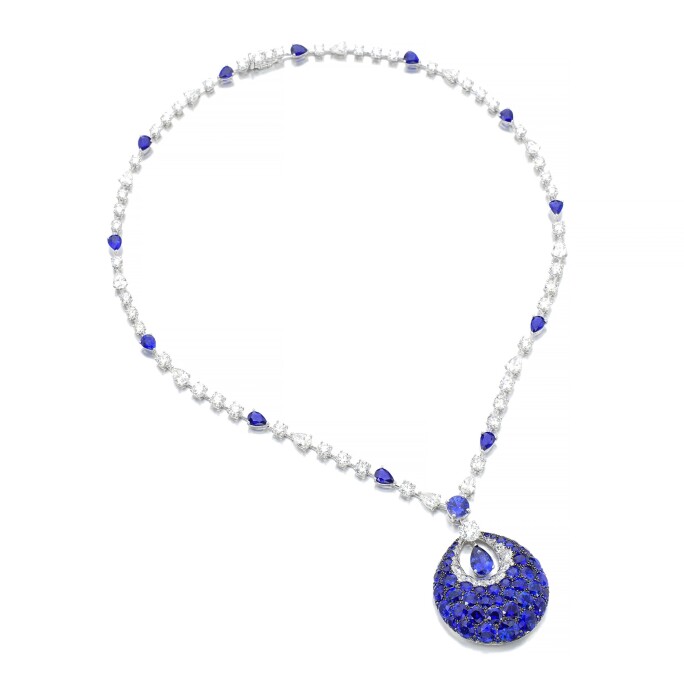 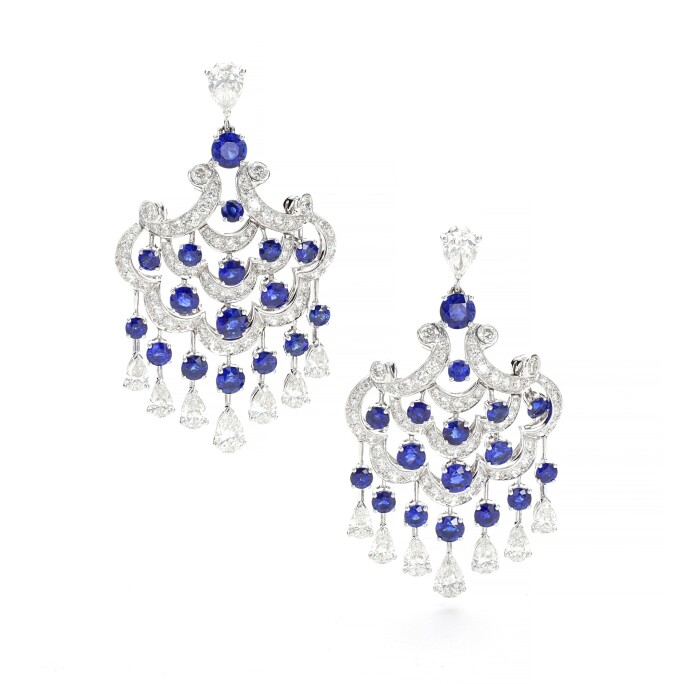 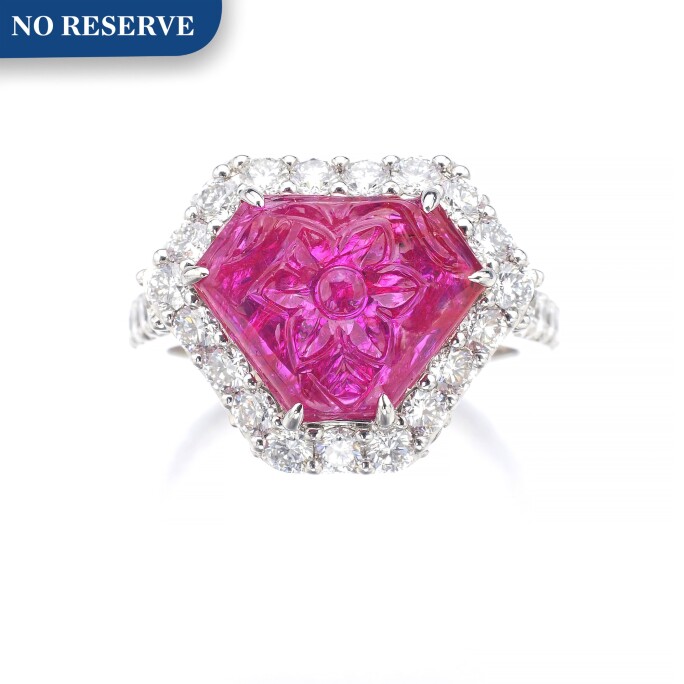 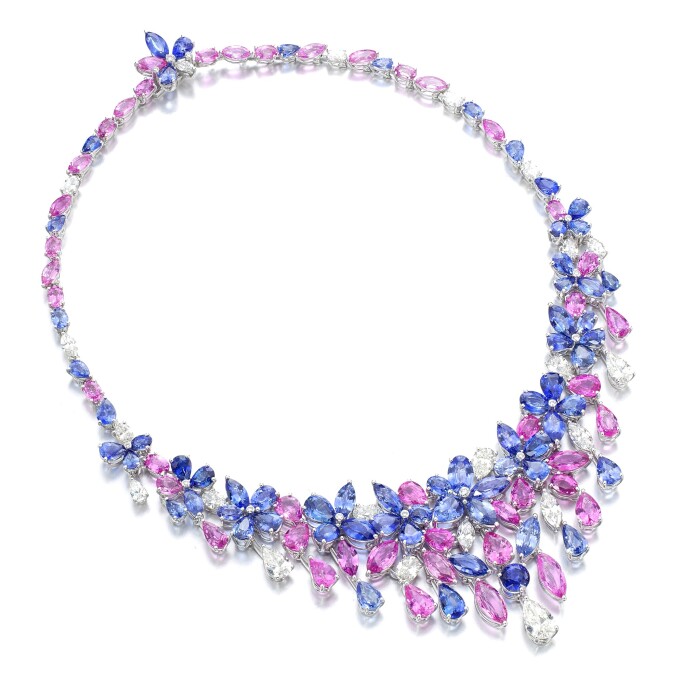 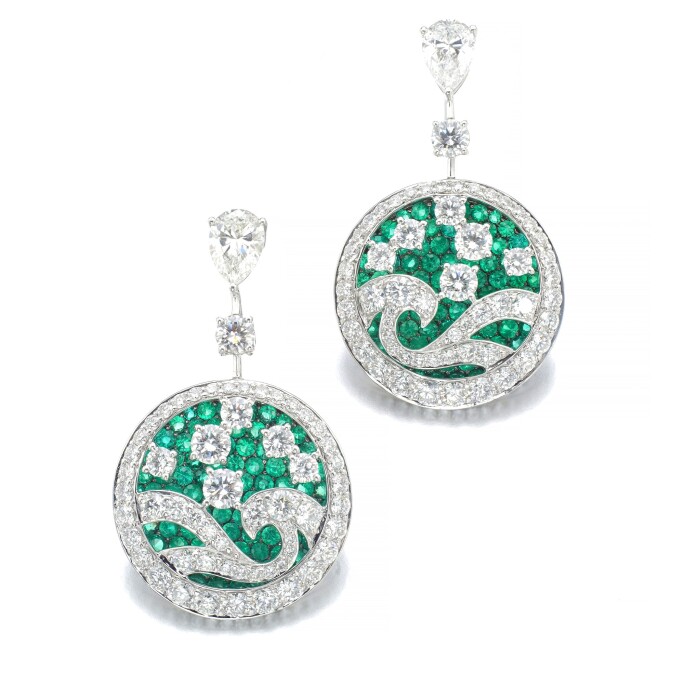 Rubies are, of course, the colour of blood, fire and passion while in Sanskrit the ruby is known as ‘ratnaraj’ which translates as King of Precious Stones. Ceylon (Sri Lanka) provided the world’s first main source of rubies until the 16th century when Burma’s output took over, and it’s only now in the 21st century that a new, major deposit has been found in Mozambique.

Saturation of colour is important in a desirable ruby with an intense hue particularly key, and all ruby lots in this auction show just such characteristics. Stand outs are a pair of domed clip earrings (lot 30) that gently curve away from a central stone, or a snake pendant (lot 31), it’s sinuous diamond body set against a backdrop of rubies with a single ruby drop suspended from its tale.

And finally the sapphire, a stone that appears in a myriad of colours with one of the most valuable iterations being a rich, intense blue. Like the ruby and emerald this stone has been treasured by civilisations for thousands of years; the ancient Persians believed that the earth rested on a giant sapphire pedestal and that its reflection coloured the sky. Truth, sincerity and faithfulness were also perceived attributes while tradition states that Moses was given the ten commandments on tablets of sapphire.

The ancient Greeks and Romans claimed sapphires held mystical powers giving their owners wisdom and health, while in the Middle Ages they were worn by royalty as amulets to ward off evil. Famous sapphires include the Star of India; at 563 carats it’s the largest known gem-quality blue sapphire in the world and is thought to be roughly two billion years old.

Considerably smaller but arguably more famous is the sapphire engagement ring originally given to Princess Diana by Prince Charles and now worn by the Duchess of Cambridge, a jewel that has helped keep the sapphire a popular, coveted gemstone today.

A beautiful pair of diamond and sapphire chandelier earrings (lot 19) lead the blue sapphire lots with a curtain of stones that gently fan out, while a sapphire and diamond bracelet (lot 20) is a contemporary update on the tennis bracelet.

Rich in heritage and loaded with symbolism and meaning these stones are perfect for those that want to experience the most intense colours that the earth can provide. Set into painterly jewels that resonate with vibrant hues, to own one is akin to possessing a wearable piece of art where history, craft and mother-nature form the perfect partnership. 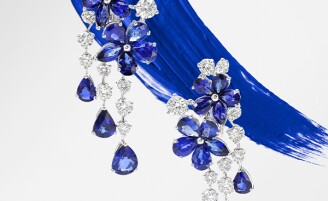 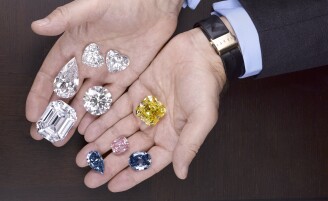 Jewelry
The House of Graff: Crafting the World's Most Artistic Jewels
Jewelry