F or many watch collectors, Rolex is king. And, among the brand’s many coveted models, the Daytona is the king of kings. It isn’t the most complicated or intricate timepiece; it didn’t introduce any technical breakthroughs or set any records – yet it’s an undeniable icon. Internet search statistics show that Rolex’s Daytona is consistently one of the most sought-after watches. And it’s not just for entry-level novices – up until 2017, a Daytona held the record for most expensive wristwatch ever sold. How does a relatively humble tool watch inspire such a fervent cult following? Much of the Daytona’s allure can be traced to its illustrious history – and the fact that it wasn’t an initial success.

In the 1960s, when the Daytona debuted, Rolex wasn’t considered an authority in chronographs. The brand was esteemed, but mostly for the Oyster and Datejust models – elegant, everyday watches with a versatile appeal. Chronographs – watches equipped with a stopwatch function to measure periods of time independently of the hour and minutes – are a technical breed of timepiece generally used by professionals, not the laymen that were Rolex’s core customers. When the brand introduced its first chronograph, the reference 6234 in 1955, it simply didn’t catch on. After six years of production, it was discontinued in 1961.

Ever persevering, Rolex continued to pursue the creation of their ultimate chronograph. While the brand wasn’t known for racing watches, they did have a genuine tie to the racing world. British driver Sir Malcolm Campbell set nine world records for speed in races throughout the 1920s and 30s. On his wrist? A Rolex Oyster. These were the early days of car racing, when it was perceived as a glamorous sport for the elite few. Campbell’s endorsement, and racing in general, gave Rolex an edge that would prove handy in launching a winning chronograph. 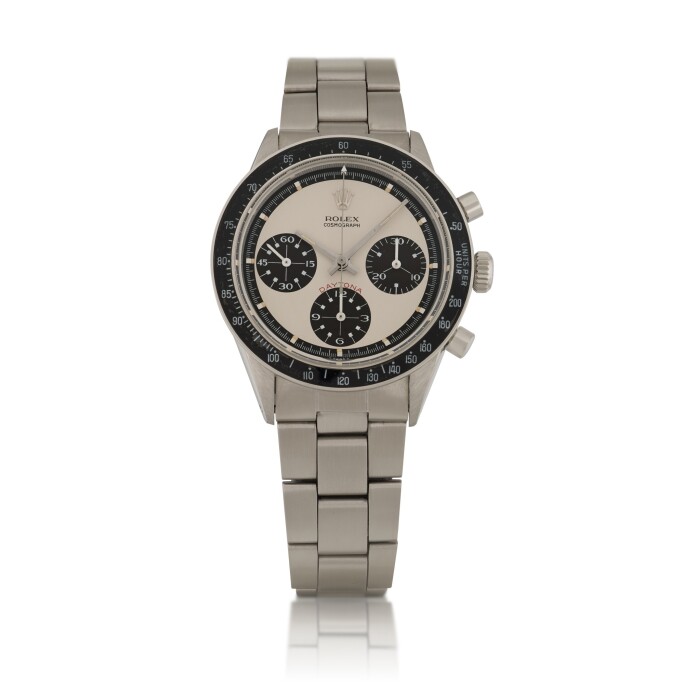 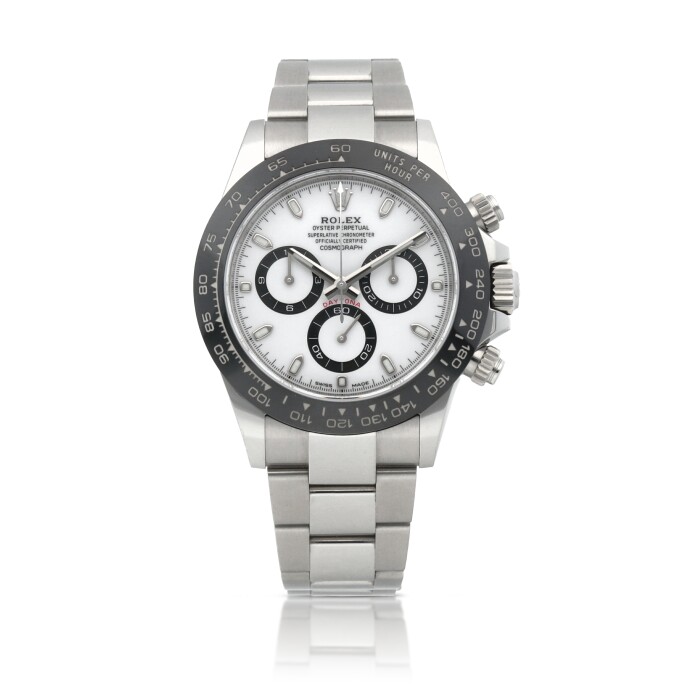 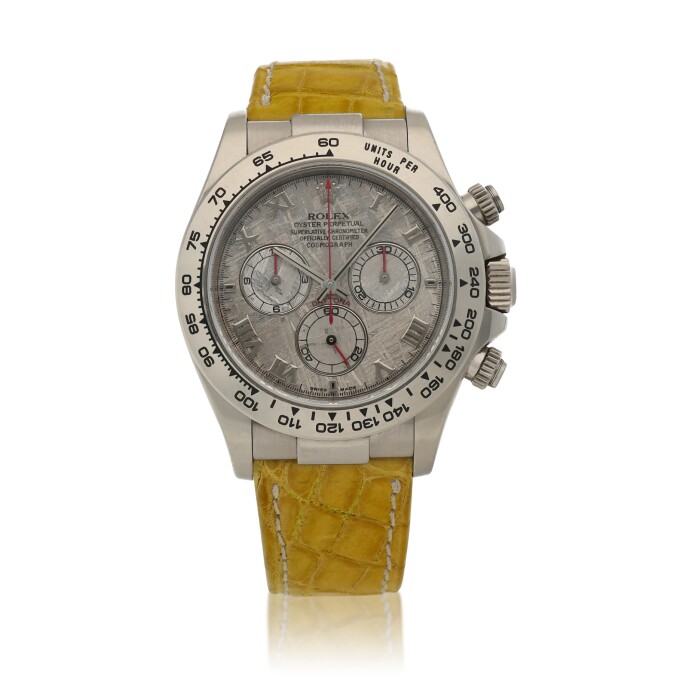 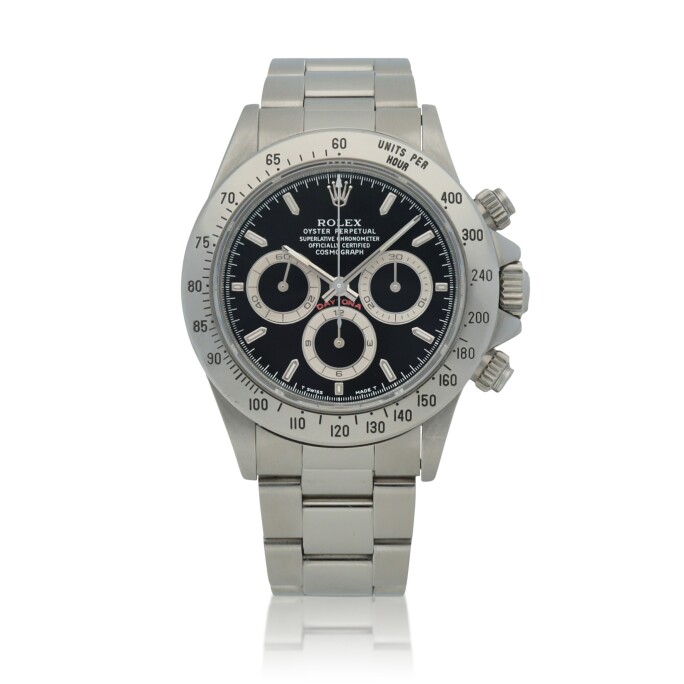 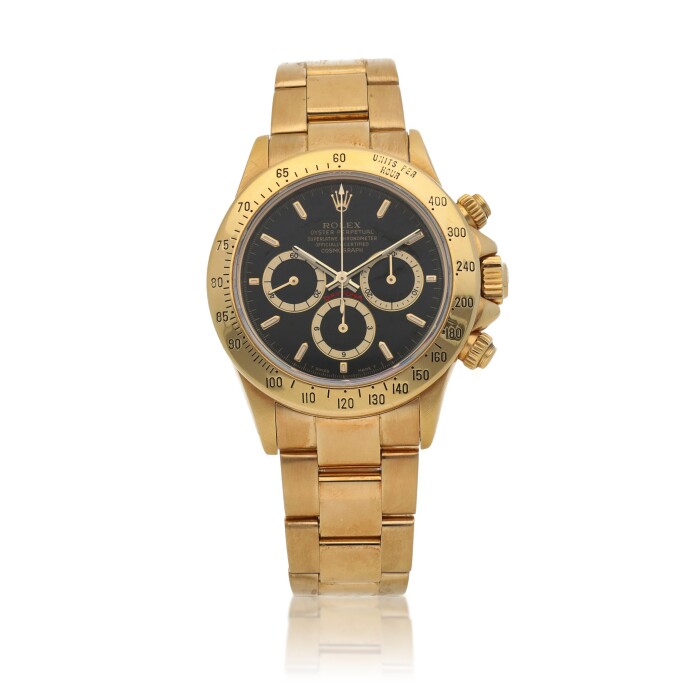 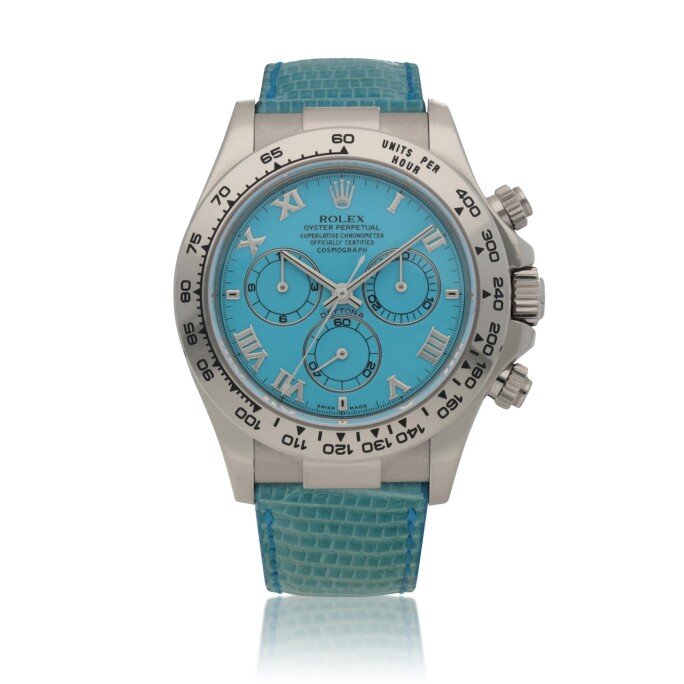 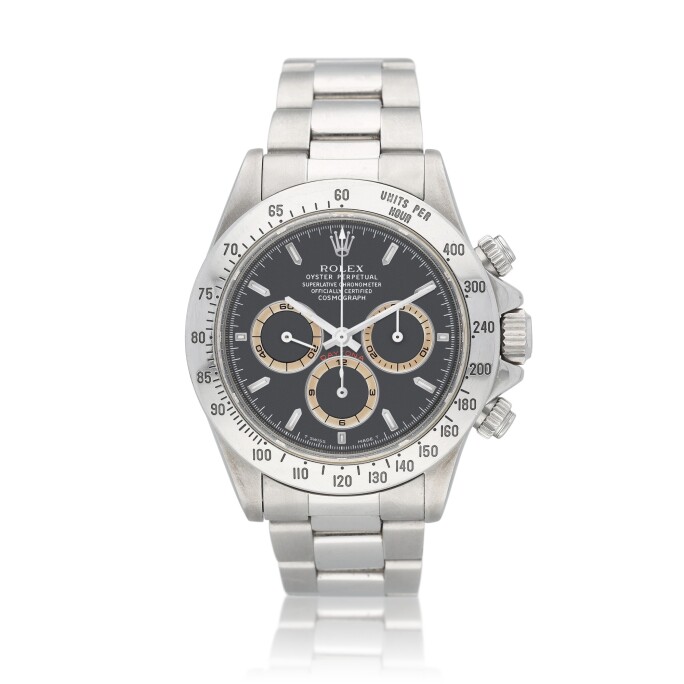 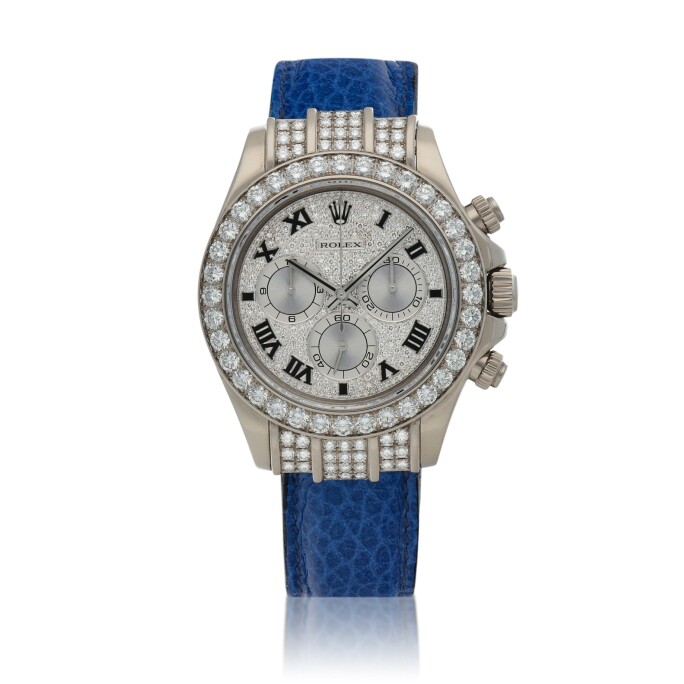 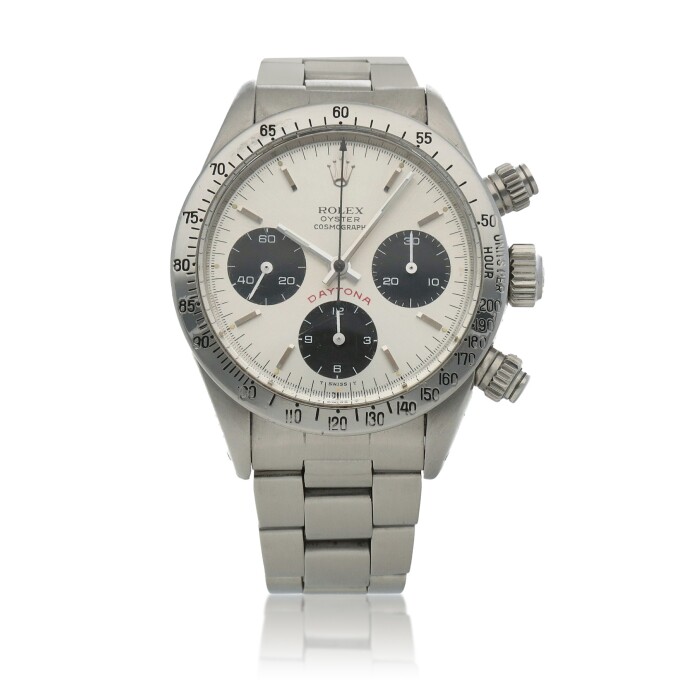 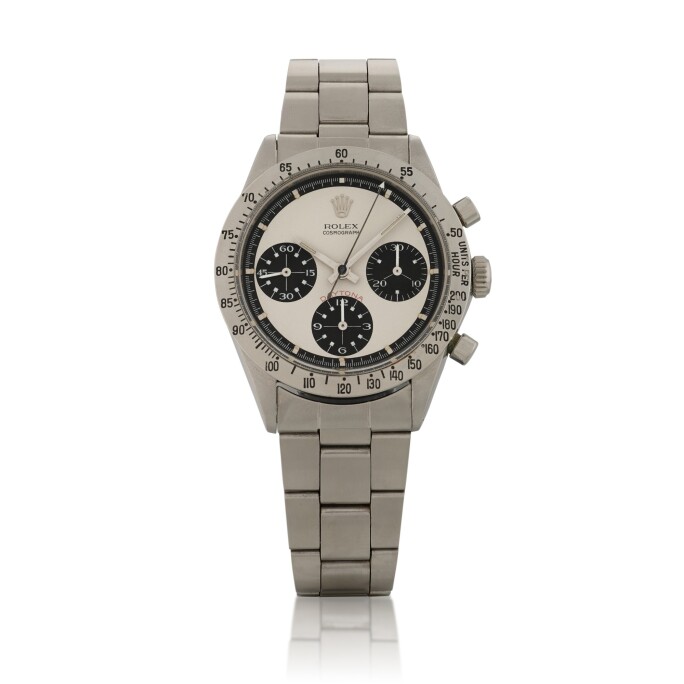 When the Daytona Speedway opened in 1959, it was one of the world’s greatest venues for motorsports. In 1962, Rolex became Daytona’s official timekeeper – a distinction the brand holds to this day. One year later, bolstered by the Daytona partnership, Rolex’s remastered chronograph premiered. Although it was nicknamed the Daytona within the company, the reference 6239 bowed as the Cosmograph. The name Daytona wouldn’t appear on the dial until 1964.

Unlike Rolex’s previous chronographs, the Cosmograph was designed specifically with racing in mind. It had several subtle shifts that made it stand out, including contrasting-colored sub-dials, that provided greater legibility, and a tachymeter scale engraved on the bezel. The tachymeter bezel, which allows the wearer to measure speed or distance in relation to time, and graphic sub-dials remain the Daytona’s most distinguishing features. The original models came with pump-style chronograph pushers, which were then replaced by screw-down pushers for enhanced water-resistance with the reference 6240 in 1965.

Google search statistics show that Rolex’s Daytona is consistently one of the most sought-after watches.

Initially, the Daytona didn’t set the watch world on fire. As a result, Rolex experimented with various minute changes – different dial colors, alternate arrangements of text, various indices – that now get collectors’ hearts racing. As the brand attempted to iron out the watch’s perceived kinks, they produced numerous iterations in extremely limited runs. Today, these ultra-rare models are some of the most coveted, and most valuable, watches on the secondary market.

The Daytona’s biggest break came in the late 1960s, thanks to a singularly influential figure: Paul Newman. Newman was both an accomplished racer and one of Hollywood’s brightest stars; he was uniquely equipped to make the Daytona a pop culture phenomenon. Legend has it that Newman’s wife, the actress Joanne Woodward, bought Newman’s Daytona as a gift once he’d begun devoting more time to the racetrack. The model she purchased featured a so-called “exotic dial”, a variety of unusually appointed dials that weren’t particularly desirable at the time. But because of Newman’s lifelong association with his watch, exotic dial Daytonas are now considered a holy grail get.

The much lauded “Newman Dial” is marked by a crisp white face, punctuated by black sub-dials with bold numerals, and framed by a contrasting black seconds scale around the dial’s edge. Beyond the elusive Newman model, the early reference 6239s are among the most collectible Daytonas. Other notable models include the references 6262, which was only produced for one year, and 6263, equipped with an acrylic-inlaid bezel and hand-wound movement. In 1988, Rolex introduced the first automatic Daytona, reference 16520, powered by a modified El Primero movement from Zenith. And in 2000, almost forty years after the Daytona debuted, Rolex launched the reference 116520: the very first Daytona to boast an entirely in-house movement.

In recent years, one of the most buzzed about Daytonas is the reference 116500. Introduced in 2016, it features a Cerachrom bezel (Rolex’s proprietary ceramic material that can withstand almost all wear and tear). Beyond its novelty, the black bezel piqued watch enthusiasts as it nods to the acrylic bezels on the Newman and other early models – a reverent riff on the Daytona’s heritage. Even this contemporary watch is as hard to come by as many vintage styles; waitlists for factory new Daytonas are estimated to be several years long.

The Daytona is still deeply connected to the racing world. The watch is given as the first-place prize in races at both Daytona and Le Mans, the two most prestigious international motorsport events, and it is the official timepiece of Formula 1. Yet, in many ways, the Daytona has transcended its utilitarian origins and become a symbol for the sport of watch collecting. It embodies all the traits that give vintage timepieces their dynamism: provenance, rarity, iconic design. Whether on the track or at auction, it is truly a watch for winners.