I n the pantheon of horological greats, there is one timepiece that is unrivaled in three pillars of collectability: technical excellence, pioneering design, historical significance. It is, of course, the Omega Speedmaster. The Speedy may well be the most famous watch in the world, thanks to its presence at the 1969 moon landing (a broadcast that drew a record 650 million viewers around the globe). That association—and the singular mechanics that made it NASA’s choice—is central to the Speedmaster’s near-mythic status. But that’s not the only reason it’s a G.O.A.T. Even before it helped make a giant leap for mankind, the Speedmaster made a giant leap for horology.

The Speedmaster was breaking ground from the moment it debuted in 1957. While often overshadowed by its later galactic exploits, the Speedmaster is, first and arguably foremost, the watch that put chronographs on the map. Chronographs may be a staple of any watch enthusiast's collection today—many men wear them as an everyday timepiece, with everything from finely tailored suits to jeans and tees—but that was not always the case.

Rewinding back to the early 20th century, watches were less of a luxury and more of a practical necessity. As such, the market was dominated by relatively simple models that fulfilled the average consumer’s needs: telling the time and maybe the date. Watches were largely just watches. In the 1950s, watchmakers began charting new technical territory to develop specialty timepieces geared toward the needs of particular professions. This is a period that yielded the first diving watches, like Blancpain’s Fifty Fathoms and Rolex’s Submariner, and anti-magnetic devices, like Rolex’s Milgauss and IWC’s Ingenieur. 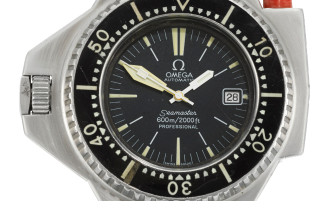 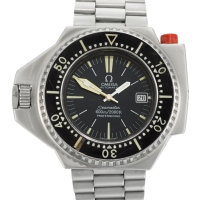 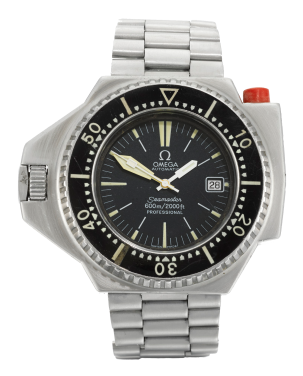 In 1957, Omega debuted a trio of models that would come to be known as the Professional series. They were the brand’s first real foray into tool watches: the Railmaster boasted anti-magnetic precision for engineers and scientists; the Seamaster offered waterproof protection for divers. So far, very much in line with what else was being produced at the time. The Speedmaster, however, was a curveball. Combining a three-register chronograph with anti-shock, anti-magnetic protection and water resistance up to 200 feet, it was a super-powered machine that went above and beyond practical utility. This was a watch built for anything and everything. 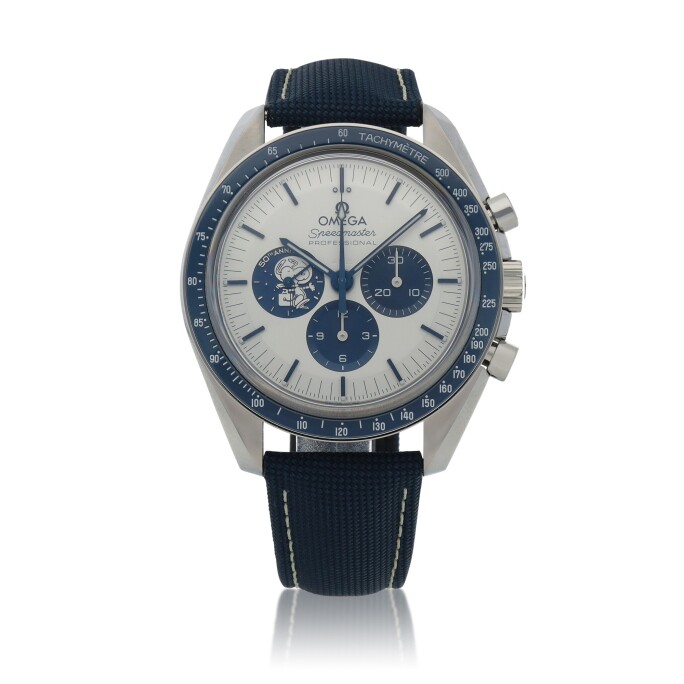 Chronographs, which can act as a stopwatch in addition to keeping time, had a rather limited audience at the time: surgeons, some engineers and a few serious athletes. It was a complication generally found in pocket watches, seen more as a piece of equipment than an everyday accessory. The Speedmaster changed that, introducing chronographs into the lingua franca of wristwatches and paving the way for the later Rolex Daytona and Tag Heuer Carrera.

In a savvy marketing move, Omega positioned the Speedmaster as a racing watch. The complication was certainly fitting for professional drivers’ needs but, moreover, evoking the racetrack’s high-octane aura lent the Speedmaster considerable sex appeal. The inaugural ad campaign touted the watch as a “high-precision wrist computer” that was designed for “men who reckon time in seconds”. The Speedmaster wasn’t just for racers, it was for anyone who lived life in the fast lane.

Perhaps the most revolutionary element of the Speedmaster is its design. Chronographs, with their tachymeter scale and multiple sub-dials, were generally rendered as pocket watches as anything smaller would have been illegible. Yet, Claude Baillod, the Speedmaster’s designer, managed to make a 39mm chronograph on the wrist sing. Said to have been inspired by the sleek lines of Italian sports cars, Baillod devised a graphic, high-contrast dial that is clean and easily readable despite its many features. This is largely thanks to the ingenious decision to move the tachymeter—which, in previous chronographs, was always found on the dial—out to the bezel. 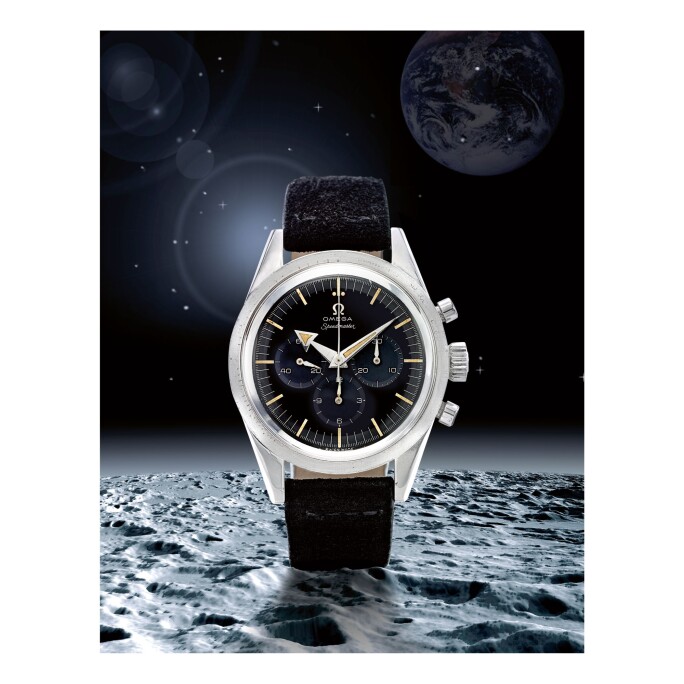 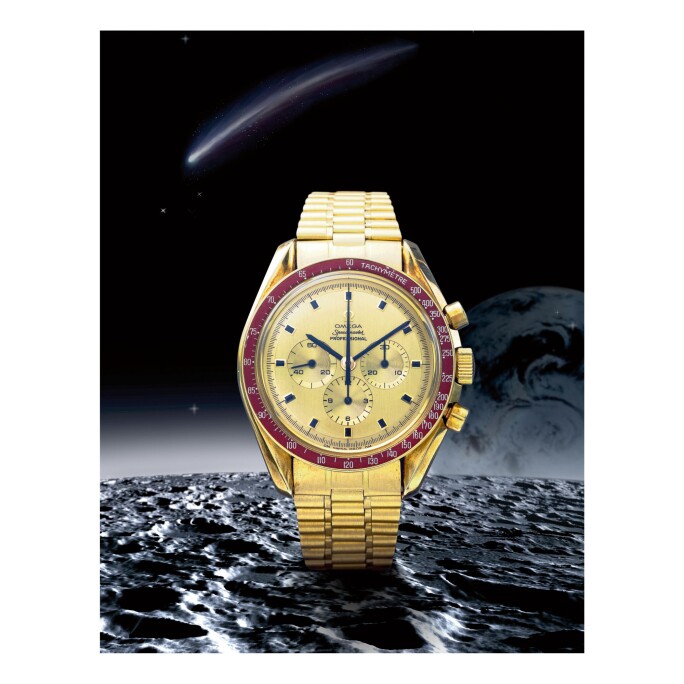 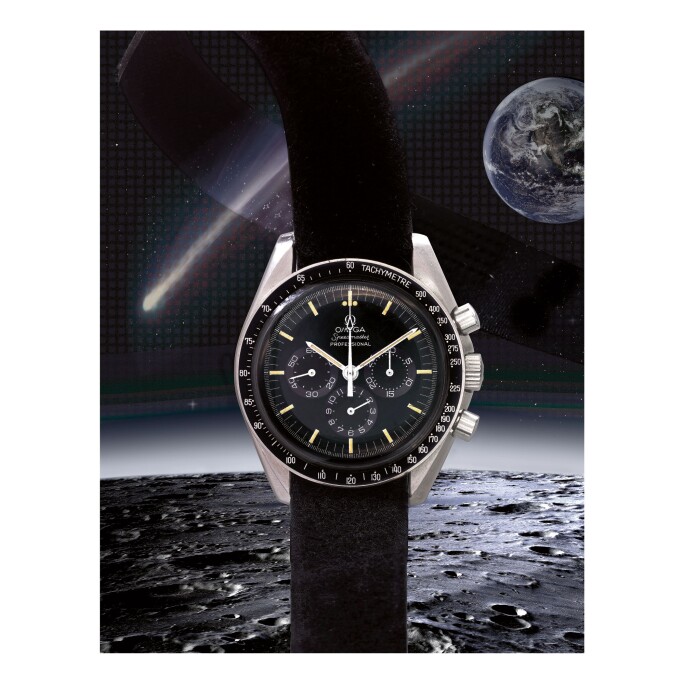 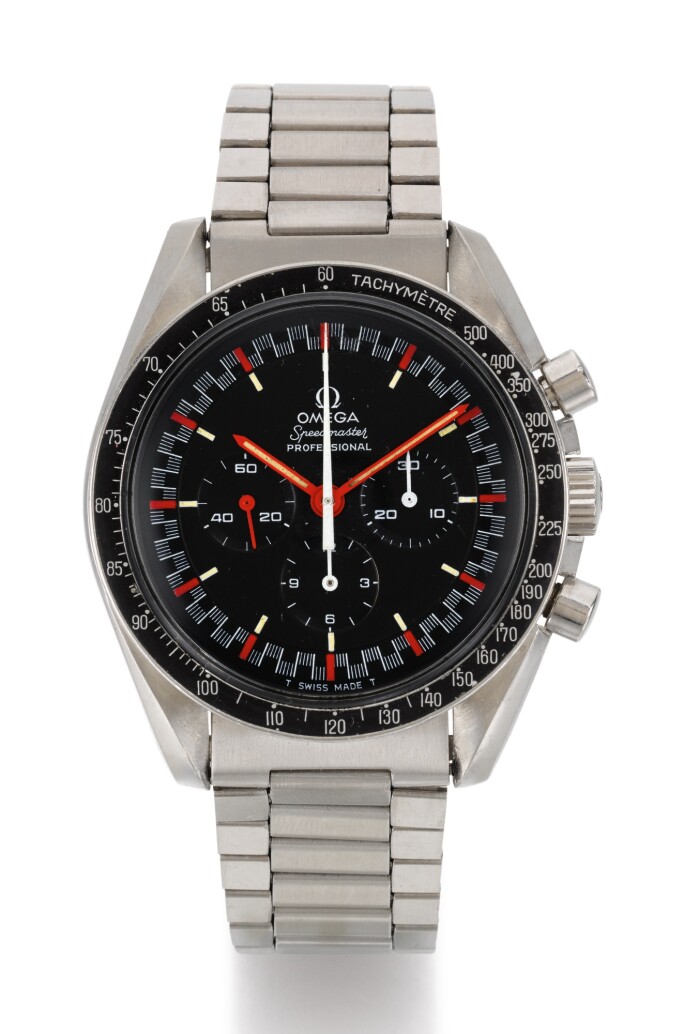 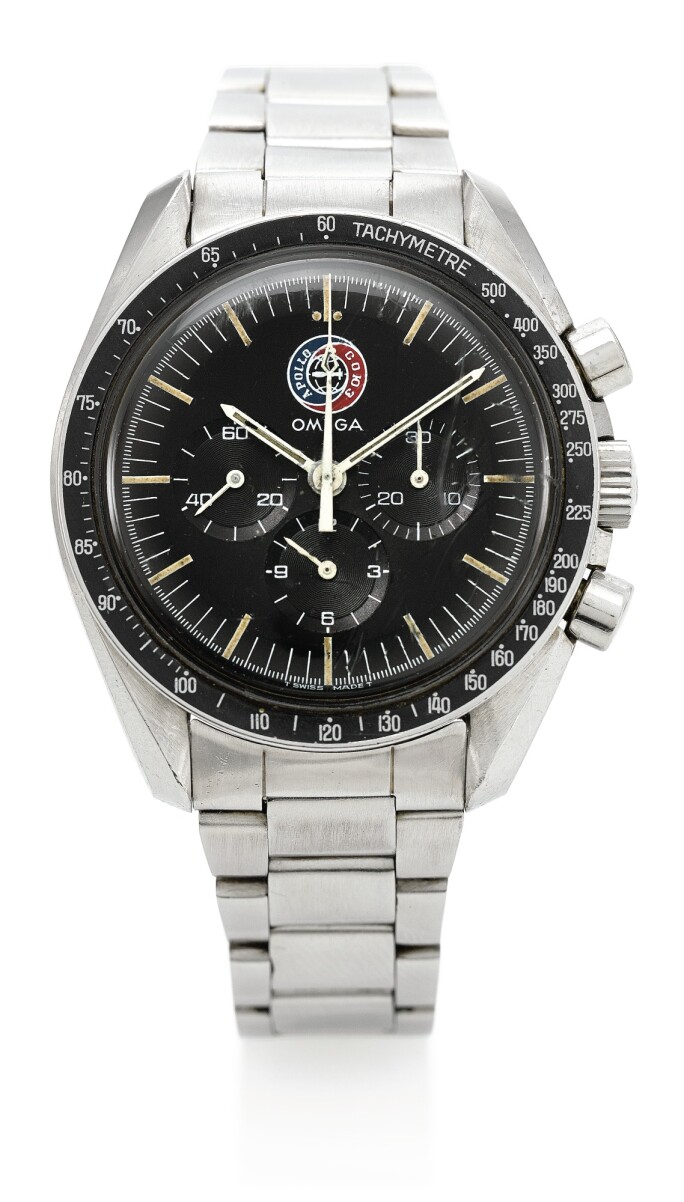 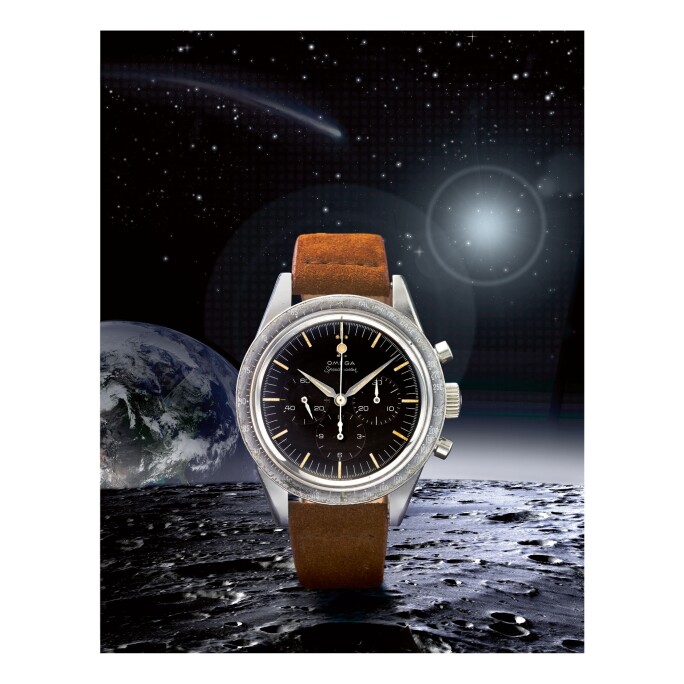 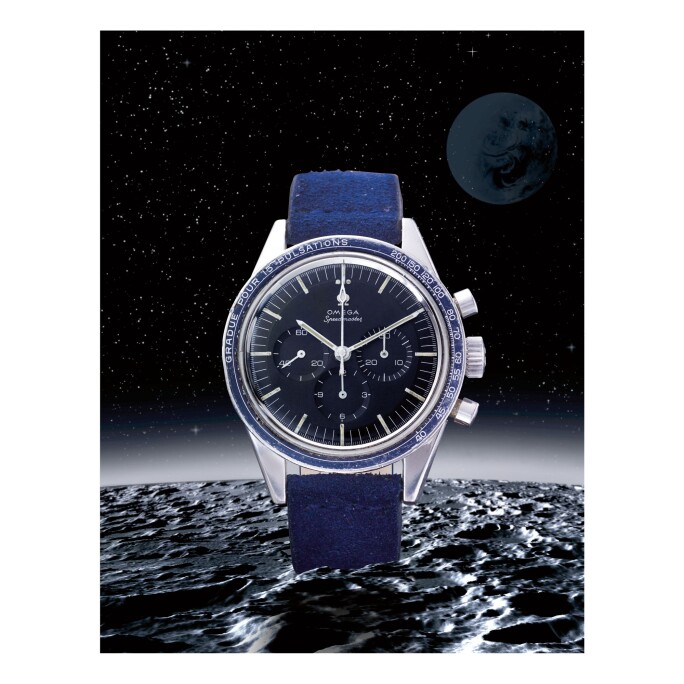 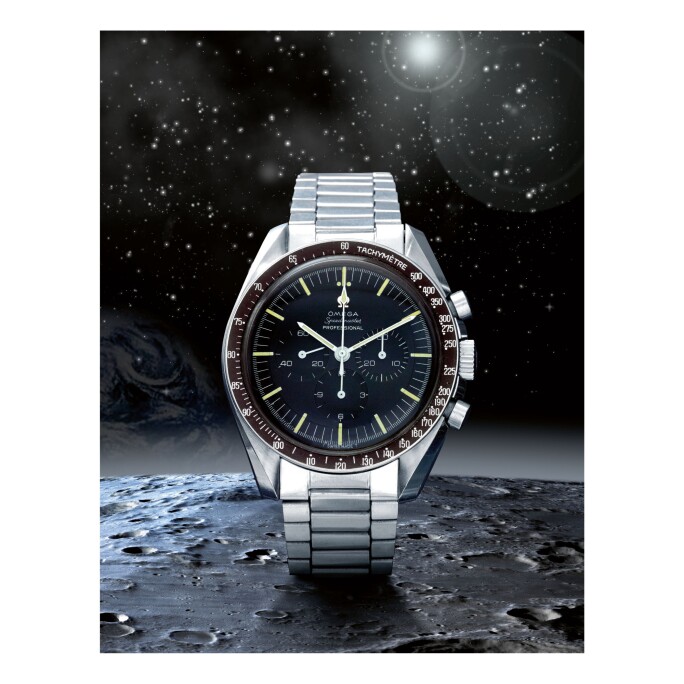 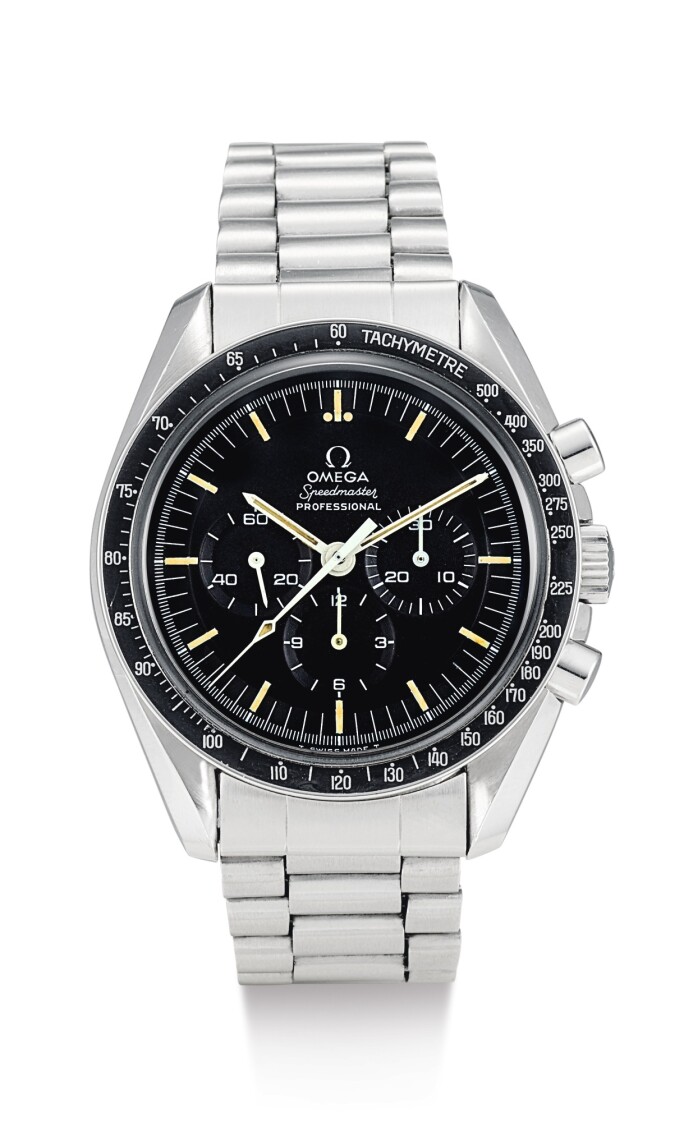 From the get-go, the Speedmaster’s appearance was exceptional for its balance and proportions. And in the 60-plus years since it bowed, very little has changed. Even beyond Omega, few others have been able to improve upon the Speedmaster’s canonical design. It set the template for every chronograph that has followed. These are things so commonly seen today that it can be hard to appreciate all that the Speedmaster pioneered: the tachy bezel, the arrangement of the sub-dials, the select use of Arabic numerals.

The very first models, reference 2915, are considered the rarest, most collectible Speedys—a ref. 2915-1 holds the record price for a Speedmaster, selling for $408,500 in 2018. This first generation has two telltale hallmarks: an engraved stainless-steel bezel (later models would have black bezels for enhanced legibility) and a “broad arrow” hour hand. The movement, Omega’s Caliber 321, is one of the smallest chronograph movements ever made and one employed by the likes of Patek Philippe and Vacheron Constantin.

The next generation, ref. 2998, is what shot the Speedmaster to stratospheric fame, literally. Surprisingly, Omega had very little to do with getting its watch to space. In the earliest days of space exploration, NASA did not have an officially sanctioned timepiece; watches were, essentially, astronaut’s choice. American astronaut Wally Schirra wore his personal ref. 2998 on the Mercury-Atlas mission in 1962. The watch kept ticking without fail, which piqued NASA’s interest.

The following year, Omega released the slightly tweaked ref. 105.003—with a larger crown, luminous indices and stick hands—which is what NASA secretly purchased to test drive in the lead-up to its first moon mission. It was one of numerous models from esteemed watchmakers including Rolex and Breitling that were subjected to rigorous tests of endurance: extended periods of extreme temperatures (a high of 200°and low of 0°), humidity, pressure, shock and much more. By the end of testing in 1965, the Speedmaster was the only watch left standing.

Omega didn’t get the news until they saw a photograph of an astronaut wearing one during America’s first spacewalks, the Gemini 4 mission. This is a testament to the Speedmaster’s remarkable mechanics: it was not engineered for intergalactic exploration but it was up for the job. Omega didn’t design the Speedmaster to withstand such extremes—remember, it was conceived for the racetrack. It was simply an exceptionally reliable timepiece that just happened to be the toughest watch on Earth.

By the time Apollo 11 was getting ready for takeoff, the Speedmaster had gone through another evolution. This, the 42mm ref. 105.012, is what would become the moon watch. There is some gray area around the definitive moon watch: Buzz Aldrin and Neil Armstrong, who actually stepped foot on the lunar surface, were outfitted with ref. 105.012; back aboard Apollo 11, however, Michael Collins was wearing a slightly later ref. 145.102. These were the two last Speedys to feature the Calibre 321 and both are unquestionably historic.

Those two may have been the first but Speedmasters would continue to accompany American astronauts on every subsequent trip to space. In fact, a ref. 145.022 may be the most celebrated Speedmaster in the galaxy: when 1970’s Apollo 13 suffered an explosion, prompting the infamous line “Houston, we have a problem,” it was a ref. 145.022 that saved the day. Commander Jim Lovell used his Speedmaster to time the critical 14-second reentry rockets that guided the team back to Earth.

Over the years, there have been numerous riffs on the Speedmaster—some 250 variations are on record. One notable iteration is the BA145.022-69, 'APOLLO XI' an 18K yellow gold limited edition commemorating the moon landing. Of only 1014 made, 34 were gifted to NASA astronauts. In any guise, the Speedy’s allure endures. But it still the early Speedmasters—those unassailable icons—that will send even the most jaded watch collector’s heart racing.