How the Rolex Daytona Became a Collector Favourite

I n 1963, Rolex introduced the new “Cosmograph” chronograph wristwatch. Bearing a new reference number, 6239, Rolex revolutionized the sports chronograph by moving the tachometer scales, previously printed directly on the dial to be instead calibrated on the bezel. Over the next 25 years, Rolex perfected and transformed this manual chronograph, always striving to enhance the durability and appearance of the watch with different dials, case metals and pushers.

The reference 6239 was in production for roughly nine years and most of the dials used were either black or silver, incorporating contrasting subsidiary registers. It is thought that approximately 14,000 reference 6239 models where manufactured, with only three percent of this number made in gold.

Towards the end of the 1960s, Rolex introduced a new type of dial to the reference 6239 family. The “Exotic” dial, known today as the “Paul Newman” dial was considered a commercial failure at the time. Nobody wanted it and by the mid 1970s the “Paul Newman” dial was lost from production. This exotic dial was totally different from any other dial before it. Its construction displayed completely different subsidiary registers and a chronograph seconds track that had a huge impact aesthetically. 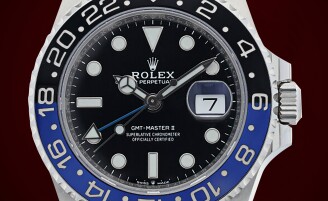 The Rolex “Paul Newman” dial can be found mounted mainly on stainless steel watches with an extremely small number in gold. The manual Daytona evolved over six references until it was replaced in 1988 with the automatic Daytona. In 1966, Rolex introduced the reference 6241. The main difference, a small yet significant innovation from the ref. 6239, was the slightly wider black acrylic calibrated bezel insert. This reference was available mainly in steel with a very limited number made in gold.

The references 6262 and 6264 were introduced in 1969, powered with the new 727 caliber and featuring a slight change to the lug design and new graphics for the dials. The references differentiate from each other in that the 6262 was fitted with a metal calibrated bezel and the 6264, a black acrylic bezel insert. It is without question that the 6262 and 6264 are the rarest references of the Rolex Daytona and were only made for a year or so. It is thought some 1800 pieces were made of both references combined, the majority in stainless steel.

The final references that were in production for the longest were the 6265 and 6263. Introduced in 1969 and discontinued in 1987, the references were made in stainless steel, 18k and 14k gold. These watches enjoyed greater water resistance due to the screw down pushers and screw down winding crowns. Production of these models is estimated at around 25,000 pieces in stainless steel and a tenth of that in gold. Almost all “Paul Newman” reference 6263 and 6265 are known in steel and less than a handful known in gold.

Research suggests that the Rolex gold 6264 “Paul Newman” is known in fewer than ten examples, of which the majority are fitted with a “Lemon Paul Newman” dial. Fewer than five examples are known to be fitted with a “JPS” dial, making this watch among the rarest gold “Paul Newman” models known to exist and putting it at the very top of an already incredibly limited group of collectors' watches.

How to sell your watch with Sotheby's 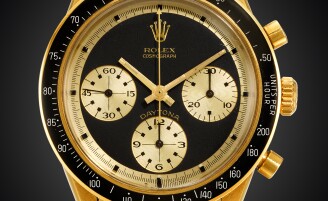