From Ancient Rome to 1960’s Jamaica: The Amazing Journey of Four Statues

Half a century after their first transatlantic voyage, four ancient Roman statues return from Jamaica to London...

“I have been to many fun parties in my life, but never have I been to anything quite like the Roman Bacchanal”, a guest commented to a Philadelphia newspaper after attending the toga party at the Coopers’ villa El Cerro in Montego Bay, in 1974, which celebrated the Ides of March.

The invitees had been ‘commanded’ to attend the feast of Caesar Douglas and Queen Diene of the House of Coopers and were announced on arrival with a fanfare of trumpets. The trumpeters wore Roman costumes, of course.

But let's go back a few years. It’s 1968. Montego Bay, Jamaica. After fifteen months of construction work, Mr. Douglas Cooper and Mrs. Diene Pitcairn Cooper, jewellers from Philadelphia, inaugurated their magnificent new villa by the seaside. She was a jewellery designer. He was a jewellery dealer. A few years earlier they had chosen Montego Bay as the new place to open yet another jewellery salon, after opening salons in Philadelphia, Costa Rica and Amsterdam.

COVERAGE OF THE COOPERS' 1974 PARTY IN THE PHILADELPHIA INQUIRER

Their villa in Jamaica was converted into an exquisite assemblage of the most diverse works of art, partly inherited from Diene’s father, an avid art collector. It became the perfect location for the most exclusive parties, attended by the most illustrious personages of East Coast high- society; bankers, politicians, ambassadors. Their parties were perfectly orchestrated, and even drew the attention of the press, who published reviews and even lists of the lucky invitees.

Everything in the villa reflected the luxurious lifestyle of the high society of Philadelphia: from the octagonal living room (Douglas Cooper once commented: "Our living room at El Cerro is octagonal because diamonds are born in Octahedrons"), to the Michelangelo-style painted fresco on the hall ceiling, to a chess set created by Duchamp for his friend Dali.

No one visiting the opulent villa could miss the group of four larger-than-life-size Roman statues, set in a magnificent colonnade around the round pool, a clear reference to Villa Adriana in Rome. These four superb statues made an extraordinary journey from Rome in the 2nd century A.D., ending up in Jamaica in the rock ’n’ roll Seventies, playing witness to all the amazing events in the most magnificent location.

The Coopers’ artworks, including the statues, actively contributed to the splendour of the Coopers’ parties, and the entire villa was turned into a coliseum for a splendid toga party in 1974.

Don’t be surprised if you come close to the statues and can still hear some Beatles, Iggy Pop or Rolling Stones vibes. 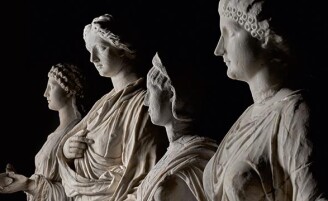