From Roman Palazzo to Gramercy Park: The Many Lives of a Roman Statue

T he Eros-Harpocrates figure is first recorded in the inventory of Cardinal Antonio Barberini at Palazzo Barberini a Giubbonari. From an Italian Cardinal, to the most celebrated architect of New York’s gilded age, to a daughter of J.D. Rockefeller, this Roman Marble Statue boasts and incredibly fascinating chain of owners. Follow along the timeline to unlock the journey of this marble depiction of Eros-Harpocrates, the syncretic Greco-Egyptian god who took on characteristics of Eros, son of Aphrodite and Horus, son of Isis.

The figure Eros-Harpocrates is first recorded in the inventory of Cardinal Antonio Barberini at Palazzo Barberini a Giubbornari, by the Campo de Fiori on 17 August 1671. Antonio Barberini was the nephew of Pope Urban VIII, who appointed him cardinal at the age of 20. Cardinal Barberini was said to have “lived a life of liberty and debauchery,” and used his status to amass a great amount of personal wealth. In addition to antiquities, he was a great collector of Caravaggio, and owned some of the painter’s most seminal works such as The Cardsharps, Still Life with Fruits & The Lute Player.

After descending through two more generations of the Barberini family, the figure Eros-Harpocrates was acquired by the famed American architect, Stanford White, while traveling in Rome at the end of the 19th century or early into the 20th. White was a principal at famed Beaux-Arts architectural firm, McKim, Mead and White whose projects such as the Triumphal Arch in Washington Square and the original Penn Station embody Gilded Age Manhattan. White rose to further prominence when he was scandalously murdered on 25 June, 1906, in the rooftop theatre garden of a building of his own design, the second iteration of Madison Square Garden.

During the finale of the play White was attending, a Pittsburgh millionaire named Harry Kendall Thaw approached the architect and shot him three times with a pistol, crying out “You’ve ruined my wife.” What ensued was known in the press as “The Trial of the Century,” where it was revealed that White sexually assaulted Evelyn Nesbit, a former showgirl and current wife of Thaw. Evelyn Nesbit was a former model and showgirl, who was a famous subject of Charles Dana Gibson. Her angelic looks would go on to embody the idea of a “Gibson girl.” The saga of White/Shaw and Nesbit would be fictionalised in Hollywood in the 1955 Joan Collins film, The Girl in the Red Velvet Swing.

While White may have met his end in 1906, the figure Eros-Harpocrates found a new home in the stately Gramercy Park Townhouse of Henry W. Poor, who enlisted White as both his architect and designer. Poor started a business with his father called “H.V. and H.W. Poor” that was the predecessor to the American credit rating agency, Standard & Poor’s. The figure is pictured in an archival photo from Poor’s Gramercy home on 1 Lexington Avenue.

Upon Henry Poor‘s death, the contents of his house were auctioned off. The figure Eros-Harpocrates was sold a single lot as a “Massive Antique Fountain” together with a Roman marble strigillated lion sarcophagus later sold separately at Sotheby's, New York in December 2012.

The buyer was interior designer Charles Adam Platt (1861-1933), who designed the sprawling Lake Forest estate called “Villa Turicum” on the shores of Lake Michigan for Harold Folwer McCormick, and his wife, Edith Rockefeller McCormick. The figure can be seen inside the classically inspired “Pompeiian Room.”

Edith was the youngest daughter of John D. Rockefeller, the co-founder of Standard Oil and widely considered to be the wealthiest American of all time. Edith was an art lover and eccentric character, who received minor press later in her life when she claimed to be the reincarnation of the wife of the Pharaoh Tutankhamen after Howard Carter’s discovery of his tomb.

Her collection was sold in 1934 after her death, with the the figure selling for $375 along with the aforementioned sarcophagus as part of a fountain. He eventually made his way back across the pond into a private collection the United Kingdom, and is a major highlight of the upcoming sale at Sotheby's in London from the 3-9 July.

Explore the full catalogue below. 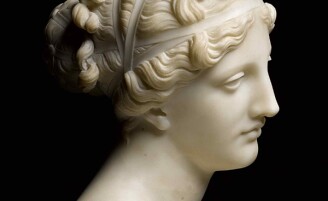