T he recent successful London Ancient Sculpture and Works of Art sale on the 6th July included various lots consigned to us by clients who used our Online Pricing Platform. Here we take a closer look at some of the lots.

The striking bust of Aphrodite is typical of a Roman marble with eighteenth century restoration. To revive excavated marbles, a common practice at the time was to insert carved sections rather than leave in the excavated state. The restorations to this particular lot include the shoulders and socle, a lock of hair, the nose, the lower lip, part of the chin and one cheek, but they do not detract from the strong and purposeful bust with exquisite carved waved hair. The bust is from the collection of Gilda Grat de Racaj Montemayor. She was a director of the Demotte Gallery NY prior to moving to Mexico City. The Demotte Gallery was known for dealing in European/Medieval sculpture, tapestries and works of art. This, and the following two lots, share the same provenance and have been consigned by a North American client who inherited the three works.

From the same source as the head of Aphrodite, this Roman marble table leg fragment is carved with a striking panther or lioness mask. The actual piece features in an old photograph of Gilda Grat de Racaj Montemayor’s Interior in Mexico city. A similar table, restored by Piranesi, with three comparable legs, is located in King Gustav III’s antikmuseum in Stockholm Palace.

This Roman marble head also has early restoration, notably to the nose and lips, dating from the seventeenth or eighteenth century, which in turn are now weathered and chipped with some plaster infill. However in this instance she has not got later carved shoulders or socle. Related busts of Faustina are found in the Capitoline Museum, the Uffizi and the Louvre, all with the same central parting and tied back curled hair. The head had been sold previously at Sotheby’s in 1974.

This Roman statue had been in the garden of a house in Stratfield-Mortimer, Berkshire and shows typical weathering and traces of moss and other damage. The style of the carving suggests a funerary portrait statue. It can be traced back to Augustus Joel Walker (1868-1965) a London picture dealer, though it is not clear if he bought it, or if it was already there when he purchased the property in 1916. The house is known to have been occupied by Frances Wylde, daughter of the Rev. William Thomas Wylde, Rector of Woodborough, Wiltshire, and his second wife the Honourable Elizabeth Pleydell Bouverie, granddaughter of the 2nd Earl of Radnor. The family lore is that Augustus asked the British Museum for an opinion and assistance in "finding the head".

We are accepting entries for the next live and on-line auction on 7 December and the deadline is mid-October.

Mark Stephen is Deputy Director in the London valuations department, responsible for online valuations with 35 years’ experience in the auction world. The variety and breadth of antique and often, not so-antique, objects and paintings sent to Sotheby’s via our online platform is an experience to see. We sift through watches, jewellery, wine, paintings from every period, silver, ceramics and objects so bizarre they cannot be categorised. The good, the bad, and the ugly of the antiques world passes through our hands on a daily basis.

For more information and to have your objects valued click here. 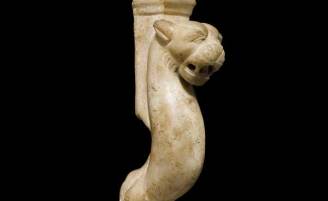