A Portrait of the Artist as an Old Man, from the Early Years of the Roman Empire

By Sotheby's
Ahead of Sotheby's upcoming sale, Ancient Sculpture and Works of Art on 4 December, we take a closer look at one of the most intriguing items featured, a funerary statue of an ancient poet.

O riginally thought to be a likeness of Virgil, this rare statue of a professional poet of the early years of the Empire depicts a semi-deified individual, bare-breasted and enthroned, holding his scroll as if it were a scepter.

It was made in two parts, and hollowed out to contain the ashes of the deceased. Discovered before World War Two, it went through the hands of prestigious art dealers both in Italy and in the United States before entering the Albright-Knox Art Gallery in Buffalo, New York, in 1936. It has been on view at the Antikenmuseum in Basel for the past ten years.

The Buffalo statue "presents a poet in a mood of remarkable, if rather strained, self assurance” observes Paul Zanker. His book roll and Greek manner of clothing — a mantle that leaves the entire torso exposed — identify him as a poet. A member of the aristocracy would, in his funerary likeness, be surrounded by emblems of his social status. It would most likely have stood in the funerary precinct of the poet’s patron, who may also have commissioned the work.

Rather than the earlier Greek statues of poets with their citizen dress and relaxed pose, like Menander and Poseidippus, the models for this statue were the exaggerated heroic imagery of Late Hellenistic art. This statue’s pose is even more exalted. The poet sits straight as an arrow, with his legs apart, not unlike the type of Jupiter that inspired images of the enthroned emperor. 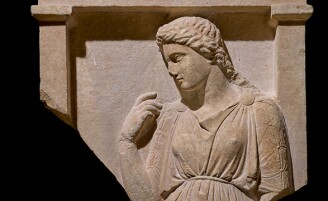