Artefact from Apollo 11 to Appear at Auction

On 20 July 2017, the anniversary of the Apollo 11 moon landing, Sotheby’s New York will offer the bag used by Neil Armstrong to bring back to Earth the very first sample of lunar material ever collected. The bag, which is expected to fetch between $2-4 million, will be offered in Sotheby’s Space Exploration sale.

Still containing traces of the moon dust, the artefact gives a collector the chance to not only own some of the first lunar material ever collected, but also the chance to own an exceptionally rare relic of humanity’s greatest achievement – landing a man on the moon.

During the Apollo 11 mission Neil Armstrong collected nearly 500 grams of material finer than 1 cm, as well as 12 rock fragments larger than 1 cm from five different locations on the lunar surface in the region known as the Sea of Tranquility. Given the then unknown nature of lunar material, this decontamination bag was used to minimize any potential harm the samples might pose to the Command Module and planet Earth.

Nearly all of the equipment from that historic mission is housed in the U.S. National Collections at the Smithsonian; however a recent court ruling has allowed this to be the only such artefact in private hands.

The true history of the bag went unknown for decades until just a year ago. It was offered three separate times in 2014 by a small auction house on behalf of the US Marshall’s service, garnering not a single bid. It was relisted again in 2015, where the current owner won the lot with a bid of $995.

Interested in the history of her purchase, she sent it to NASA in the hope of obtaining further information. Scientific tests revealed the dust in the bag to be moon dust, specifically from the Apollo 11 landing site, and the part number printed inside of the bag matched up to that of the “Contingency Lunar Sample Return Decontamination Bag” listed in the Apollo 11 Stowage list.

The bag’s current owner plans to share a portion of the sale proceeds with a number of charities, including the Immune Deficiency Foundation and the Bay Cliff Health Camp Children’s Therapy and Wellness Center, and also plans to set up a scholarship for students studying speech pathology at her Alma Mater, Northern Michigan University. 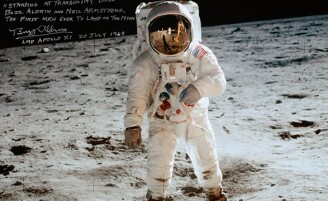