We sat down with the creative mind behind our Luxury Week takeover in New York to discover the secrets of seeking out the extraordinary, wherever you find yourself in world.

What is it about the look of Wes Anderson’s films that first excited and interested you? And do you remember where you were the first time you thought somewhere looked like it could be in a WA film?

There is something about the aesthetic that you can't quite put your finger on it, but you know it when you see it. There are certain characteristics that qualify, but there is a layer of nuance and subjectivity that is ever changing and opens it up to vast interpretation.

You originally started the account as a personal travel bucket list. Have you visited many of the locations you’ve featured?

We have been so fortunate to have the opportunity to visit a number of new cities and countries thanks to this project, but not even close to the number of places we have featured on the account and in our book. We will keep striving to see as many as we can!

How have you approached the Sotheby's auction property with your very distinct aesthetic approach?

We have approached the Sotheby's auction property by looking at it through the AWA lens, identifying the unique and interesting aspects of its provenance, and understanding the history behind the piece which truly makes it a Hidden Wonder.

Why do you think you’ve attracted 1.4 million followers, and what does the account mean to you now that it’s so well known?

We like to think of this as a Community (always with a capital 'c') which has grown out of a shared love of exploring new places, understanding the stories behind the facade, and seeking out the hidden beauties that we might have otherwise missed. There is a true sense of positivity and genuine interest this Community shows and through that it has found its own unique place in the world and we are honored to be a part of it.

You include lengthy captions with your pictures, explaining exactly what it is we’re looking at. How important are those back stories to you?

The story, the caption, the history – it is just as important as the vivid visual, if not more so. Without the background, without the context, we are just looking at a pretty picture.

The account and the book celebrate both well-known landmarks or buildings as well as the more unusual, remote or unexpected. How satisfying is it to discover those hidden gems?

It is extremely satisfying to discover new hidden gems, but sometimes it is even more satisfying to uncover these unique aspects of well-known landmarks. In our book, we featured a photo of Buckingham Palace, but I'm willing to bet the narrative we told is not one you have likely heard before. I really appreciated how one journalist noted that we explore "the footnotes" of a location. I think that hit the nail on the head.

What locations closer to home in New York have the Wes Anderson look?

There are far too many to count! A quick search of our website pulls more than a hundred results in New York – but we've had a chance to recently explore a few closer to home with Sotheby's including The Met, Floyd Bennett Field and The American Museum of Natural History. My personal favorite would have to be the Roosevelt Island Tramway – I don't think there is anything more AWA than a mechanical, aerial people mover.

What is your favorite location from The Royal Tenenbaums, which was filmed primarily in New York?

Though known by a different name in the movie, The Alexander Hamilton U.S. Custom House is one of the most interesting 'Hidden Wonders' in NYC. No appointment necessary, this designated city landmark houses the National Museum of the American Indian, a Bankruptcy Court and the National Archives. It also happens to have one of the most impressive ‘lobby’ areas to explore downtown. No appointment necessary :)

Many of the account’s photographs feature beautifully preserved interiors from past decades, for example, an art deco opera house. How important are antique objects and vintage designs to making a place memorable?

The objects and designs themselves are interesting, but the way that they come together, and the stories they tell about that location and the people that lived their lives inside those interiors – that is what makes the place so memorable and what makes the location itself so special.

How has seeking out settings that look a certain way changed the way you travel and respond to new places?

Whether traveling or just walking to the grocery store, I feel like I have unlocked an exciting way of looking at the world and appreciating moments and items and interactions that otherwise might be overlooked. (Spoiler alert: It is a lot of fun)

What has it taught you about appreciating the world around you?

That no matter where you live, no matter how far from your home you might be able to wander, there is a story and a structure waiting to be uncovered if you just allow yourself to see it.

As a keen traveler, has the last year been especially hard? Where have you spent lockdown?

The last year has been incredibly hard for so many reasons, but at the same time it opened our eyes a lot. We learned how much things meant to us that we typically took for granted. From the perspective of travel, I believe I will have a much greater appreciation each time moving forward that I'm afforded the ability to get on a plane or train and venture to a new place. Additionally, the time spent regionally allowed us to explore places in our home area that we likely would not have and through that, we uncovered a lot of unexpected and hidden gems right in our own backyard.

How did you decide which images made it into the book?

The process of deciding which images we would include in the book was a journey in and of itself. We started with 15,000+ photo submissions and slowly but surely whittled them down. Once we hit around 1200 photos that were the cream of the crop, we began to unearth interesting narratives for each. Through that curatorial process along with many hours of research, we ultimately came to our final 200 that created our first printed collection.

Even though Wes Anderson’s films are all obviously made by him, they do have their own unique styles. Which is your favorite?

My answer to this question continually varies based on the seasons and maybe my mood. I have always had a love for Rushmore as it was the first Wes Anderson film I saw and have fond memories of that time. But Darjeeling Limited, Bottle Rocket, Life Aquatic, they all jockey in & out of the top few favorites. That said, I have been very lucky to have seen an advanced screening of The French Dispatch which is set to come out this year, and I would be lying if that has not taken the top position. As soon as it was over, I wanted to watch it again! 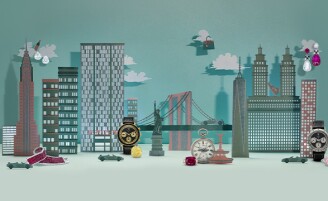