Property of the Original Owner 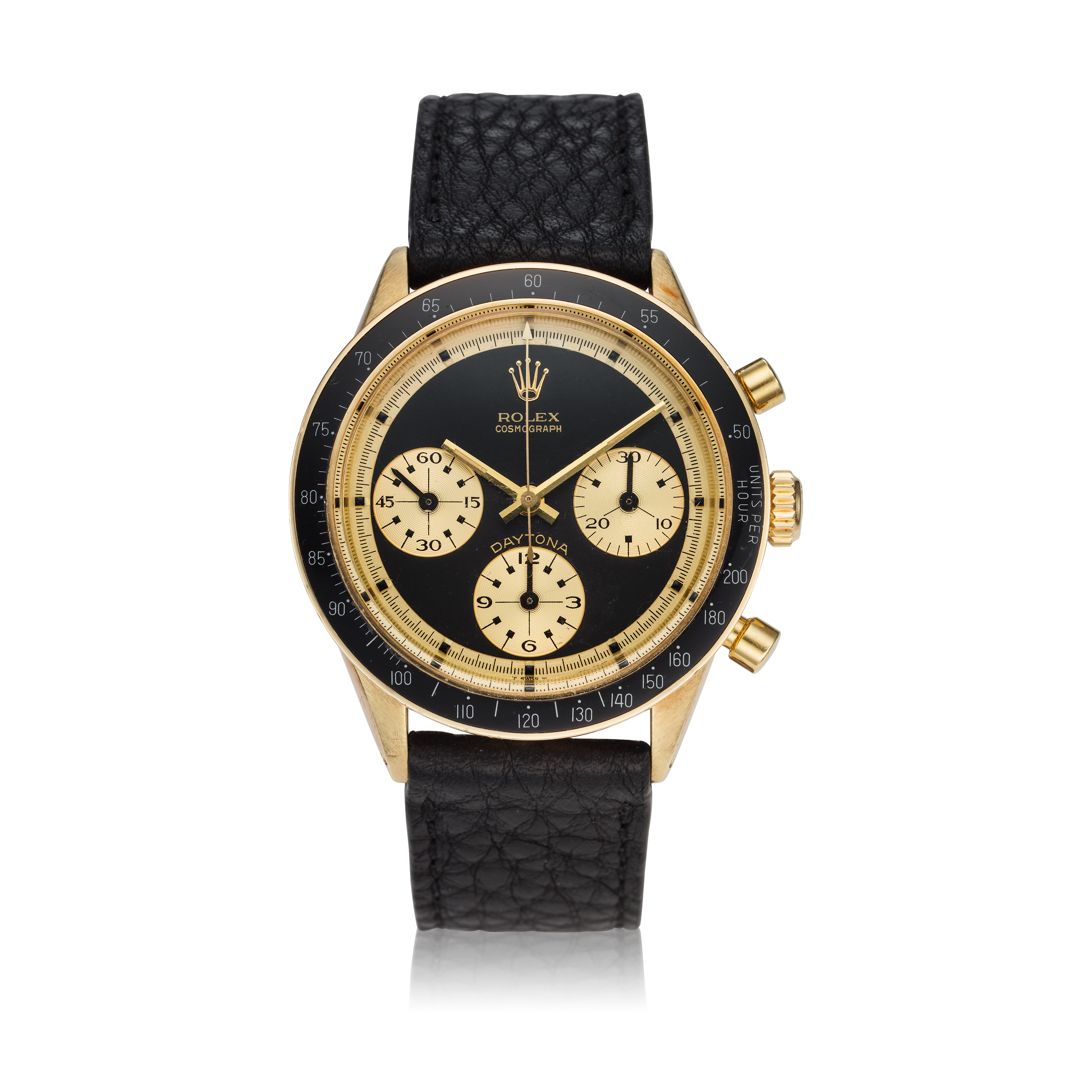 Property of the Original Owner

A yellow gold chronograph wristwatch, Circa 1968

Case: The case is good condition with light signs of wear and polishing. The case back has a personally engraving that reads 'To Jim Roberts on Graduation 6-5-72 From Mother and Dad'. The inscription is discernable but the case back has been previously polished. The inside case back has watchmaker's marks and is stamped 6541. The serial and reference number between the lugs are legible. The bezel insert is replaced. Please note that the strap and buckle are generic and not signed Rolex.

Dial: The dial is in overall very good condition with some losses to the luminous material at 3 and 9 o'clock which is common for these watches.

For passionate scholars and collectors of vintage Rolex, it’s the manufacturing variances employed by the watchmaker in the production of their most celebrated references which make the iconic brand’s timepieces such a joy to immerse oneself in. These subtle yet significant variances speak to the brand’s continual commitment to evolution and innovation, while also ensuring there will never be a dull moment for collectors choosing to focus their efforts on single models. With nearly six decades behind the Daytona, its dedicated collectors are in continual celebration of the professional chronograph’s many compelling forms, but few are more sought after than those fitted with scarce variants of the exotic Paul Newman dial. Among the most visually striking is the famed John Player Special Daytona, representing not only an aspirational apogee of vintage Rolex collecting, but one of important watch collecting as a whole.

Affectionately named for its resemblance to the black and gold livery of John Player Special sponsored Team Lotus cars of the 1970s, this watch evokes the excitement and boundary-pushing opulence of Formula One racing in unmistakable style. This holy grail tier variant of an already rare watch is characterized by the pairing of a black and gold contrasted Paul Newman dial with a yellow gold case, and was naturally produced in limited numbers, yielding a rarity within a rarity of sorts. With the total production of reference 6241 Daytonas amounting to roughly 3000 examples over the course of just three years, it’s estimated that only an exceedingly small fraction of these watches were both cased in gold and fitted with black Paul Newman dials, explaining the exceptional infrequency with which fresh to market examples surface.

Furthering this example’s anomalistic nature is its execution in 14K yellow gold, confirming the market it was originally delivered to, and contextualizing the factors once guiding watch design. Due to the higher taxation of 18K gold watches entering the United States in the period, Rolex responded through the production of lower karat cases for the Daytona. As regards the reference 6241, fewer than 400 examples are believed to have been cased in 14K gold, and with only a handful of 14K John Player Special Daytonas having surfaced in recent years, one can only imagine just how few times such watches were produced by Rolex. Needless to say, the rarity of this optimally configured and enormously important chronograph cannot be understated.

Though indeed synonymous with race car driving in more ways than one, it’s important to note how in addition to originally marketing the Cosmograph Daytona to motorsports enthusiasts, Rolex also promoted its usefulness amongst amateur sailors, along with professional navigators and pilots. Such campaigns, along with the watchmaker’s designation as the “Official Timepiece of Pan American World Airways” surely resonated with the present example’s original American owner – a professional pilot whose high-flying career spanned nearly 35 years.

Given to the original owner by his parents on June 5th, 1972, this exceptionally grand gift marked both the earning of his pilot’s license in 1971, along with his date of graduation in 1972, which is endearingly engraved on the gold chronograph’s caseback. Making its uniquely exciting, brand ethos-aligned past all the more compelling is the fact that the watch was relied upon as a trusted companion throughout the majority of the professional pilot’s career, until eventually being retired from regular wear in 1996. This affords the important watch a high-flying provenance aligned with the brand’s ethos of ensuring impeccable performance and tasteful aesthetics all while under the pressure of demanding professional applications.

Combining one of Rolex’s absolute greatest designs with especially thrilling provenance, this outstanding example of the John Player Special Daytona is a timepiece of monumental importance and a nonpareil to no end. It’s unlikely to ever again encounter a Rolex Daytona of this variety, caliber, and condition, with such intrepid professional provenance.