1. Marc Chagall was born Movcha (Moses) Chagall on July 7, 1887, in what is today Belarus. He often joked that he was “born dead,” as he was unresponsive after birth, and his family needed to poke him with needles and dunk him in a trough of cold water before he finally cried out.

2. He had a stutter as a child, and was prone to fainting. As an adult, he attributed his timid childhood disposition to a fear of growing up, once remarking to a friend, “Even in my twenties I preferred dreaming about love and painting it in my pictures.” 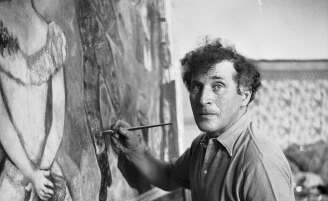 3. His family nominally adhered to Hasidism, which forbids visual representation of God’s creations. Chagall, therefore, grew up in a home devoid of art or images. When he began painting figures later on in his life, his uncle, who was very pious, refused to shake his hand.

4. His father worked in a herring warehouse; his mother managed a small grocery store. As the eldest of nine children, Chagall was expected to help support the family. His early talent for art was not met with enthusiasm; nevertheless, after pestering his mother, he was allowed to attend an art school operated by the local artist Yehuda Pen.

5. Despite referring to Vitebsk in his memoirs as “a strange town, an unhappy town, a boring town,” his hometown was often the subject or setting in his paintings. He was finally able to leave the provincial town for St. Petersburg, at the age of nineteen where he attended the Imperial Society for the Protection of Fine Arts.

6. His time spent in St. Petersburg was fraught with hardship. He didn’t like the required study of classical art, and he was so poor he would sometimes collapse from hunger. 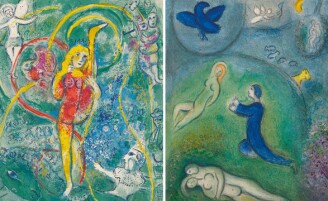 7. Chagall was able to move to Paris when he was 24, thanks to the meager support of 40 rubles a month from an admirer of his work in the Duma, Russia’s elective assembly. He lived incredibly frugally during his first years there – often subsisting on half a herring a day, and painting in the nude so as not to ruin his clothes.

8. While in Paris, he lived for a time at the infamous La Ruche (“The Beehive”), a sort of artist colony. Also working at La Ruche was Amedeo Modigliani, Robert Delaunay and Fernand Léger.

9. His seminal work Dedicated to My Fiancée was completed in one night in 1911. Later, when submitted for review for an exhibition in Paris, he had to convince organizers that it was not, in fact, pornographic.

10. Success was not so straightforward. In 1914 Chagall had an incredibly well-received exhibition of about 200 works at the Sturm Gallery in Berlin. World War I broke out soon after and Chagall was never able to recover any of the works.

11. He married Bella Rosenfeld, the daughter of the wealthiest family in his hometown in 1915. The very-much-in-love couple appear in his painting Above the Town (1914–1918) as a set of flying lovers, a motif he would return to often.

12. Although he initially adapted well to the Bolshevik regime in Russia, he ulti

mately grew dissatisfied with the Communist’s preference for full abstraction and Socialist Realism. His disenchantment led him to relocate to Berlin in 1922, and then ultimately settle in Paris a year and a half later.

13. In the 1920s, Chagall met and became friends with Ambroise Vollard, one of the most important art dealers of the 20th century. Along with supplying Chagall with a number of commissions, he also introduced him to several other leading artists of the time, including Pablo Picasso.

14. Alfred H. Barr, Jr., the director of the Museum of Modern Art, personally ensured that Chagall’s name was added to the list of European artists who needed asylum from Nazi persecution, which allowed Chagall and his family to relocate to America in 1941.

15. Chagall spent six years living in New York City. He never learned English, saying, “It took me thirty years to learn bad French, why should I try to learn English?”

16. Although primarily known as a painter, he was highly skilled at producing stained glass windows and undertook window commissions in New York, Jerusalem, and across France – all of which can still be seen today. 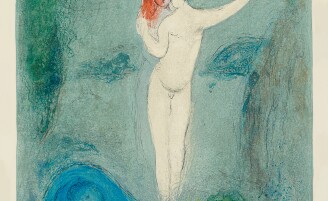 Mythology, Religion and Love on Display in a Survey of Marc Chagall Prints

17. The artist was conflicted about his time in America. He undertook several major commissions, including for the United Nations headquarters and the Art Institute of Chicago, but his heart still yearned for France. As he once described it: “I know I must live in France, but I don’t want to cut myself off from America. France is a picture already painted. America still has to be painted.”

18. His childhood timidity never totally disappeared; Chagall avoided the spotlight, and was disinterested in fame. He sometimes denied being the famous painter and when asked if he were the Chagall, the artist would mischievously point to someone else and say, “Maybe that’s him.”

19. The Surrealists revered him. André Breton, founder of Surrealism, said, “With Chagall alone, the metaphor has made its triumphant return into modern painting.”

20. The famed Pablo Picasso was at times a friend and at times a rival. Chagall once joked, “What a genius, that Picasso, it’s a pity he doesn’t paint.” On a more friendly note, Picasso once mused on Chagall saying, “I don’t know where he gets those images . . . . He must have an angel in his head.”

21. While Chagall’s painting was loved and embraced by the public — critics often characterized it as sentimental and repetitive and dismissed it. By the same note, Chagall was unimpressed by the popular modern movements of the time, specifically Impressionism and Cubism, quipping, “Let them eat their fill on their square pears on their triangular tables!”