1. Amedeo Modigliani was both in Livorno, Italy. At the time of his birth, his father, an Italian Jewish businessman, had recently declared bankruptcy. It is said that Modigliani’s actual birth saved the family from ruin, as it was on the same day that creditors came to seize all of their assets, but, because of an ancient law, creditors were not allowed to take the bed of a woman in labor, so the family piled their most valuable belongings on top of her.

2. Modigliani suffered health problems throughout his life, beginning in childhood. He developed pleurisy at age 11, and caught typhoid fever just a year later. By age 16 he contracted tuberculosis, which would ultimately be his cause of death.

3. He is known to have begun drawing and painting when still a child, and his passion for art was highlighted when, during his bout of typhoid fever, he began raving during a fever induced delirium about seeing the old master paintings of Florence. His mother promised to take him to see the paintings herself once he recovered—a promise which she ultimately kept.

4. The artist was deeply interested in philosophy, having begun study of the subject as a young child. He was particularly influenced by the writings of Charles Baudelaire, Comte de Lautréamont, and Friedrich Nietzsche.

5. Modigliani attempted to enlist in the army when World War I broke out, but he was rejected because of his ongoing poor health.

6. When Modigliani initially moved to Paris in 1906, he presented himself as an academician artist, and former bourgeois—he was reserved, drank only in moderation, and decorated his studio tastefully with old master reproductions. All of this would be starkly at odds with the degenerate, vagabond nature he would come to be known for later in his life.

7. While living and working in Montparnasse, he began studying under the famed sculptor Constantin Brancusi, leading him to create a strong body of sculpture in his oeuvre.

8. After moving to Paris, Modigliani acquired the nickname Modi, which was a play on the French word Maudit, meaning “cursed.”

9. Fellow artists also working in the Montparnasse neighborhood of Paris frequently were the subjects of his stylized portraits, including Jean Cocteau, Juan Gris, Pablo Picasso, and Diego Rivera.

10. From approximately 1914 on, the artist’s drug and alcohol abuse increased greatly. Some scholars have speculated that this was to compensate for as well as mask tuberculosis, a condition that nearly no one in his life was aware.

11. Modigliani completed his first self-portrait in 1915, depicting himself as Pierrot, a recognizable character from the Commedia dell’Arte, a clown that is highly associated with the romantic and anguished artist archetype.

12. The art dealer Léopold Zborowski commissioned several nudes between 1916 and 1919. He paid Modigliani a day rate of between 15 and 20 francs, supplied models and materials, and allowed him to use his apartment as a studio. These works are now among Modigliani’s most famous.

13. He spent the majority of his life in destitution. He was largely unsuccessful in selling his work, and, when he did, it was never for very much (and most of the money he earned was used to support his substance abuse).

14. Because he spent much of his career impoverished, some scholars have speculated that the stone he used for his sculptures was actually stolen from city renovation sites in Montparnasse—his series of heads are made from the same type of limestone that was being used to refurbish the neighborhood.

16. Modigliani had his first (and only during his lifetime) solo exhibition in 1917. However, as the story goes, a police officer passing by was so scandalized by his nude paintings that the show was forced to close mere hours after its opening for proclaimed indecency.

17. Some sources claim that the outrage and early closure of his solo exhibition was not due to the stylization of his work or the nudity, but rather the presence of pubic hair in his paintings of women.

18. Beginning in early 1918, Modigliani and Hébuterne spent a year in France, and developed a strong social circle that included Pablo Picasso and Pierre-Auguste Renoir.

19. Hébuterne, then Modigliani’s fiancée, was eight months pregnant with their second child when he died on January 24, 1920. A day later, devastated by his passing, she threw herself out of the fifth floor window of her parent’s home, killing both herself and the unborn child.

20. It was not until nearly a decade after Modigliani and Hébuterne’s death that Hébuterne’s family allowed her to be reinterred in Père Lachaise Cemetery next to him; a single tombstone marks both their graves.

21. A vast number of works by Modigliani are now lost. Much of the artist’s early work was destroyed by the artist himself, who deemed it immature and the product of his previous life as a “dirty bourgeois.” Other works were abandoned during his frequent relocations, and others were given to a number of love interests who didn’t keep them. 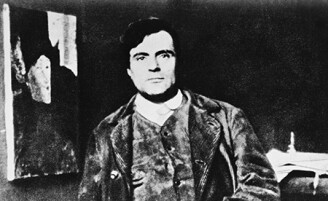