10 Under $10,000: Impressionist and Modern Masterpieces

C elebrate the summer season with bucolic landscapes, vibrant abstractions and lively hunting scenes – without breaking the bank. Extending from the late 19th to the mid-20th century, the Impressionist & Modern Art Online auction offers a compelling group of paintings, sculptures and works on paper at accessible price points. Take home names like Jacques Lipchitz, Lyonel Feininger and Jean Dufy – all represented with estimates below $10,000.

Scroll down to discover ten of the must-see works in the sale, all attainable at extraordinary prices. 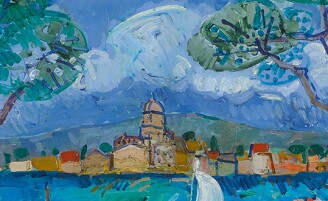 The Spanish poet Juan Larrea first introduced Jacques Lipchitz to the Peruvian festival of the bull and condor, in which bird and bull are bound together to fight in a ring. Lipchitz immediately took to the dynamic imagery of this struggle and created several drawings, prints and sculptures on the subject.

A master of the flattened planes of bright color pioneered by the Fauves, Jean Dufy took as his subject the quaint riverside town of Preuilly-sur-Claise in this charming watercolor.

Jacques Villon deftly addressed the tradition of self-portraiture in the present work, heightening his cubist style by scraping the canvas with the back of his brush to create dense texture and negative space.

A self-taught painter, Louis Vivin was a proponent of naïve painting alongside contemporaries Henri Rousseau and Camille Bombois. A postal worker for much of his life, Vivin retired in 1923 to pursue painting exclusively. While Vivin’s oeuvre typically captured his home of Montparnasse, the present work is unique in its depiction of a traditional English hunt.

Perhaps most commonly recognized as the principal advisor to Solomon R. Guggenheim during the early stages of his collecting, Baroness Hilla Rebay was also a respected artist in her own right. Often overlooked, her whimsical non-objective drawings, paintings and collages are comparable to those of Rudolf Bauer and Wassily Kandinsky.

A student of Auguste Rodin and the teacher of Alberto Giacometti, Émile Antoine Bourdelle was one of the decisive bridges from the Beaux-Arts style to modern sculpture. Conceived circa 1906, only one year after Bourdelle’s first solo exhibition, the present work depicts two dancers celebrating Bastille Day. Fittingly, one of the first owners of the work was Arthur Murray, the American ballroom dancer and founder of a famed eponymous chain of dance studios. Students of Murray's included Eleanor Roosevelt, the Duke of Windsor, John D. Rockefeller Jr., Cornelius Vanderbilt Whitney and Barbara Hutton, among others.