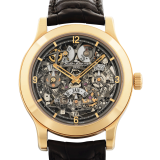 Interested in selling a work by Jaeger-LeCoultre?
Request an Estimate

Lots by Jaeger-LeCoultre at Sotheby's

Lots by Jaeger-LeCoultre at Sotheby's

Much like the brand’s iconic Reverso, Jaeger-LeCoultre is revered for elegant, understated ingenuity. With over 1,000 movements and innumerable patents to its name, many of which have been employed by such brands as Patek Philippe and Cartier, Jaeger-LeCoultre is one of the most technically savvy watchmakers in history. Founded by Charles-Antoine LeCoultre in 1833 (the company didn’t merge with Edmond Jaeger until 1937), LeCoultre set a precedent for pioneering mechanics. In 1844 he invented the Millionmeter, a measuring device of unparalleled accuracy, and in 1847 he debuted the world’s first keyless watch — technologies that paved the way for watches as we know them today.

In the early 20th century, the firms of Jaeger and LeCoultre collaborated on a series of impressive works: the Atmos clock, which operates on energy generated by atmospheric pressure changes rather than human winding, and the Caliber 101, the world’s smallest mechanical movement. Their greatest breakthrough, though, came in 1931 with the Reverso.
Designed as a practical solution for British polo players whose watch crystals were susceptible cracking during games, the Reverso featured a mechanism that allowed the watch face to swivel around leaving the stainless steel back on display. More than mere utility, the Reverso epitomized Art Deco design. Its sleek, graphic lines make it one of the most beloved watches to this day.

Some of Jaeger-LeCoultre’s other marquee creations include the Memovox, the first mechanical watch equipped with an alarm function, the Geophysic, a superlatively durable chronometer released in 1958, and the rare Grande Complication series. From tourbillons and minute-repeaters to Reversos boasting three faces, Jaeger LeCoultre’s timepieces distill form and function to yield watches that epitomize the art of horology.