I n the not so distant past, it was believed that a person of distinction, taste and learning ought to have a cabinet of curiosities. These rooms of wonder are personal collections filled with extraordinary objects that tell stories of natural marvels and flights of human imagination. The idea for such a collection was born in Europe in the 1500s, and were in all respects the precursors of modern-day museums – presenting non-specialist and pre-scientific collections of every possible heirloom from explorations and travels around the world.

In earlier times when the ability to travel was a luxury, these rooms brought the wonders of the world, including strange specimens and exotic artifacts from distant lands, together in one context. More than just amusements for the wealthy, these displays augmented awareness and understanding of the mysteries of cultures that came before them.

“Everything unknown is thought to be full of wonders”

In spirit there ought to be very few boundaries on what belongs in the cabinet of curiosities, circumscribed only by the personal imagination of the individual collector. They may be filled with objets d'art or natural curiosities. Or even better, they are complete with all things – natural or man-made – that may spark that sense awe of the unknown, of distant cultures and mythical beings – from fine carvings and paintings to beautiful stones and animal specimens.

Continuing this timeless tradition of seeking out fine and unique objects of art, Sotheby’s is pleased to present Jewels of Curiosity: Ode to Nature. This sale offers exquisite jewels inspired by the natural world from established brands and contemporary designers.

Fossils, rocks and minerals all contain the mystery of their creation, hinting to past eras that extend along the scale of geologic time. Evocative of the otherworldly formations of stalactite caves, with its cathedral-like pillars formed by water and stone over hundreds of millions of years, the high jewelry house Forms created a pair of ethereal earrings of marquise-shaped moonstones delicately suspended from tourmalines and embellished with pave diamonds. The notions of transformations into stone with the paradoxes of life and permanence, fragility and strength, are inherent in the beauty of gemstones and jewelry. Inspired by the monstrous beauty Medusa of mythology, whose gaze could turn the living to stone, Mr. Lieou’s stylized pendant depicts diamond strands of hair draping over an interchangeable pearl or diamond bead.

The symbol of Medusa’s head may be a talisman to ward off threats. Jewelry in ancient world was a marker of social status and sometimes played an important apotropaic function of protecting the wearer from harm. Protective powers derived from either the material or iconography of the jewelry piece. The designs of Young by Dilys' hearkens back to an earlier culture of protective amulets and belief in the restorative properties of stones. The Celestial Eye Brooch is inspired by the evil eye symbol, using the natural patterns of the natural saltwater pearl as the iris of an eye.

"With Eliane's designs, one sees the future of jewelry through the beauty of its past."

Images of flowers and floral motifs are a celebration of ephemera. "Pteridomania" is the term used for the Victorian era craze of fern collecting and fern motifs in decorative art including pottery, glass, metals, textiles, wood, printed paper and sculpture. The fern flower, according to myth, blooms for a very short time on the eve of the summer solstice bringing fortune and happiness to the person who finds it. As an artist and art historian, Eliane Fattal resurrects and skillfully reconstructs antique pieces from the extraordinary collection of estate jewels at S.J. Phillips. Fern is a 19th century diamond spray in the form of an unfurled fern, re-imagined as a pair of asymmetrical transformable earrings with two diamond flower buds. Third-generation creator of high artisanal handcrafted jewelry Vishal Kothari immortalizes the evanescent joy and love of a chrysanthemum on a summer day.

“Nature, art and architectural motifs enthrall me. And then there is rock ‘n roll. And surrealism. It’s in my soul.”

Appreciated for their beauty and mystery, beetles and butterflies are tiny wonders of the natural world. The very possibility of metamorphosis awakens within us a fascination for such reinvention. And yet the flutter of iridescent wings, so delicate and otherworldly, reminds us of its fleeting nature. The way gemstones catch the light in a moment suggests that same ephemerality. A beautiful ring Lovers by Hong Kong designer Wallace Chan references the legendary romance of star-crossed lovers who in death transformed into a pair of butterflies. The honeybee similarly reminds us of its extended metaphor to man and mortality.

Golden pheasants have been a symbol of nobility and elegance, a motif in costumes of Royal Prince Consorts in imperial China, and a subject of traditional painting genres. TTF Haute Joaillerie finds inspiration from the aesthetics and the philosophy of the Song dynasty, a time long past now considered the renaissance period of Chinese history. A Golden Pheasant Resting on Hibiscus Branch is attributed to Zhao Ji, Emperor Huizong of the Song Dynasty. From the collection of the Palace Museum, the painting symbolizes the pinnacle of the ‘bird and flower’ genre during the Song Dynasty and is a highly important painting from ancient China. Reimagining the imperial bird in precious gemstones, the Phoenix references this painting and commemorates the 600th anniversary of the Forbidden City, expressing wishes for wealth, fortune and a bright future. 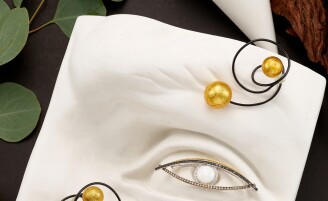