By Sotheby's
A variety of works by Maqbool Fida Husain (1913-2011), one of India’s most celebrated modernists, will be included in the Coups de Coeur: The Guy and Barbier Family Collection and the Modern and Contemporary South Asian Art sales on 10 June. Here we look at three of his works, executed between 1958 and 1978, that are illustrative of the diversity of Husain’s practice.

M aqbool Fida Husain is considered to be one of the greatest modern painters of India. Renowned for revolutionizing Indian art, he was a founding member of the Bombay Progressive Artists’ Group, which formed in 1947. They combined influences of Indian history with the European avant-garde.

In the early 1940s, before Husain catapulted to fame as part of the Progressive Artists' Group, the artist sustained a livelihood through painting cinema billboards and working at a furniture company. At this company Husain designed children’s toys made of plywood and painted by hand in vibrant colours. This work had a decisive impact on his early artistic career. Husain’s earliest artworks appear two-dimensional like his cut-out toys, infilled with deceptively simple flat planes of colour. His artistic vocabulary evolved rapidly over the coming decades. In 1953, Husain travelled to Europe where he immersed himself in the works of the European modernists. His subsequent artworks were informed by these first-hand encounters, most notably by the works of Paul Klee, Henri Matisse and Pablo Picasso.

Despite the marked influence of these Western artists on Husain, he did not merely copy figures and themes but reworked them into his own inimitable combination of line and form. Moreover, he remained committed to his South Asian roots. Aspects of European Modernism merged with Husain’s Indian sensibility, forming a distinctive visual idiom. His artistic vocabulary combined the palette of the Indian miniature tradition with the fluid postures of Indian classical iconography.

“I'm an Indian-origin painter. I will remain so to my last breath.”

Husain embarked upon several experiments with the human form. The stylised figure in Untitled (Praying Woman) bears the influence of the European modernists Husain encountered a few years earlier. The kneeling woman is set against a geometric background which shows a sun rising over a sloping hill, providing the day’s first rays of light. The woman is rendered with white and blue blocks of colour and stark red outlines.

This painting was acquired directly from the artist by the current owner, a friend of Husain’s, in 1958. During a visit to the owner in 1993, Husain was pleased to see the painting once more: ‘He stood for a while contemplating 'Praying Woman' which is a unique piece’. (Correspondence with the owner, 2019)

This work explores Husain’s lifelong fascination for horses, which constituted one of the artist’s most enduring themes. The painting also reveals the influence of Husain’s sojourns to China, Iraq, and Europe. In China, in 1952, Husain studied the ceramic horses of the Sung dynasty, and met the painter Chi’ Pai-Shih, who was known for his monochromatic paintings of animals. Subsequently in Europe, the equestrian work of Franz Marc and Mario Marini inspired Husain. Finally, in Iraq – where Husain travelled in 1965 – the artist further refined his approach to rendering horses, which began to reflect the deep spiritual confusion that Husain felt around this time.

This painting is testament to Husain’s ability to depict a sense of movement through his lines, which here reflect the immense power of the horses. Demonstrative of the extreme confidence with which Husain applied his brushstrokes, this painting is a classic example of Husain’s monochromatic palette and calligraphic style.

As with the human figure and horses, the umbrella is a metaphoric staple of Husain’s practice. It was a motif to which Husain repeatedly returned throughout his career, including in his award-winning 1966 film, Through the Eyes of a Painter.

This work forms part of Husain’s Portrait of an Umbrella series, in which Husain captured the different functions associated with the umbrella and what, as a metaphor, it could mean to different people. The current lot depicts a village woman whose face is obscured by the umbrella. The painting has been rendered in strong lines and flat planes of primary colours, reminiscent of Husain’s early artistic practice. 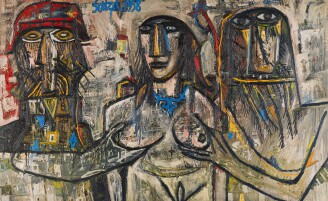 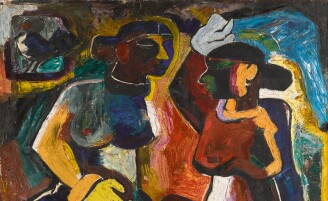