Memories Of Bhupen Khakhar and his Krishna Hotel

Dr Lochan - who was Bhupen to you?

Bhupen Khakhar to me was an extraordinary artist and a major contributor towards 20th century Indian art and contemporary practices. He has left behind an unparalleled legacy.

How did you come to meet him?

I met him along with my (late) father, who was also an artist, in 1972, when I joined the Faculty of Fine Arts, M.S. University of Baroda, as a young entrant to the institution. I have therefore discreetly observed the growth of his market and recognition of his works from those early years. Subsequently, I got the rare opportunity to handle his estate as the then Director of the National Gallery of Modern Art. Apart from that, I also organized a seminar, along with a major retrospective of his works in India, during my tenure. This took place before the exhibition at London's Tate Modern in 2016.

The environment pertaining to art in Baroda during the 1970s was extremely vibrant. It was the most fertile ground for contemporary thought and art practice in the country. Several stalwarts of the discipline lived and practiced there. Cross-pollination of ideas and critical thinking was encouraged and important national and international artists, art critics and art historians visited there, including Timothy Hyman who has also extensively written about Bhupen Khakhar.

What in your opinion are Khakhar's key works?

Bhupen’s works executed during the 1970s laid the foundation of his art practice and some of the landmark works of those years and after were Tiger and Stag, You Can’t Please All, To Sir with Love, Man with a Bouquet of Plastic Flowers, Yatra, De-Luxe Tailors, Janata Watch Repairing, Man Eating Jalebi and Hathayogini, just to name a few.

How does one decipher a painting by Bhupen?

Mundane realities of everyday life along with personal fantasies fuse to form an inimitable language unique to his art. Many of his works are confessional and autobiographical, making them progressive, controversial and cathartic. Bhupen’s colour palette consisted of garish primary colours, inspired by the scheme of filmy posters, oleographs and the Company paintings that he collected. His intelligent use of tonal gradation, along with his signature watery effect and meticulous detail, neutralizes the usage of the bright colour scheme. He had a very distinct and unique approach.

How does Krishna Hotel fit into Bhupen’s body of work?

Krishna Hotel can be considered as an important part of the artist’s experimentation during the 1970s. Bhupen produced a body of seminal works that formulated his identity, approach and visual language towards the everyday man and working class citizen. The pictorial treatment of the narrative in Krishna Hotel along with the orchestration of space is a synthesis of elements from popular and miniature paintings. His usage of colour marks this work out in a unique position, amongst the body of works produced during the 1970s. This approach matures in the work he produced over the decade.

Who are the figures in Krishna Hotel?

Anyone Bhupen encountered in his daily adventures could become a character in his painting. This could be someone on the road, or someone whom he had resonated with. They also appear as metaphorical representations. Bhupen’s interest in the ordinary, along with his deep affinity towards the weaker members of society extends to his artistic language. The characters get incorporated in the theatrical performances on the canvas, enacting episodes, events and relationships in a subtle and evocative manner.
Bhupen’s art is about depicting the phenomena of everyday life. This was not represented frivolously on the surface, rather it was injected with close scrutiny, perception and humour. Therefore, the work Krishna Hotel visually enumerates a series of events with a sense of narration and disclosure, which needs to be visually read and experienced.
His works essentially exist as commentaries on the complexities of human relationships in society and in the daily cycle of life. The places he frequented daily, the people in his interactions and innumerable lovers and friends all appear and are incorporated in his work, like revelations of a very personalized nature.
Conceptually, Bhupen’s approach can be aligned to post-Colonial studies that have been articulated during the 1970’s and 1980’s by scholars like Partha Mitter, Edward Said, Gayatri Spivak Chakraborty among many others, who have articulated the complexities of human relationships in transforming contemporary societies. Resonances of which are amply visible in his works as thematic motifs.

Does it surprise you to see a woman in the far corner of Bhupen’s painting?

Bhupen’s oeuvre was representative of his gay sexuality, so to discover the representation of a woman in his work certainly becomes intriguing. This fact within the content and the framework of this artwork, marks its significance amongst several isolated events that he portrays in his oeuvre.

Does Bhupen allude to his sexuality through the characters in Krishna Hotel?

A queer suggestive sensuality also forms the core of his aesthetic and remains central to Bhupen’s works throughout his career. This is represented by the revealing sense of physicality in his works. The gaze and the voyeurism of the characters in Krishna Hotel bear ample testimony to this, both subtly and exuberantly.

Which previous works by Bhupen do you think influenced Krishna Hotel and which subsequent works do you believe were influenced by it?

Bhupen appropriated kitsch in his art, not to reaffirm the popular in his works, but rather to challenge the very notion. Elements of kitsch make his art relatable to many people. The meticulous details reflect influences of Indian miniature paintings, in terms of conceptualization of space and its treatment in his earlier body of works. Krishna Hotel can be considered as part of the artist’s important experimentation during the 1970’s. This has also produced a group of seminal works that formulated his identity, approach and his visual language. The subsequent works influenced by it were You Can’t Please All, Seva and so on. 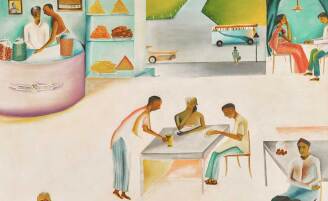