From Denmark to India: the Remarkable Collection of Gunnar and Inger Hansen

T he story of Gunnar Hansen’s life in India is essentially the story of the Indian industrial giant, Larsen & Toubro Ltd. (L&T) and the birth of modern Indian industry. An Indian company founded by foreigners, L&T built some of the first indigenous equipment for India’s nuclear, aerospace and defence establishments, and went on to become one of the major symbols of Indian industrial achievement. Some companies built their fortunes on India. Others built the fortunes of India. L&T helped build India.

While helping to make L&T the company it is today, Hansen also made a life for himself and his family in India. Hansen and his wife, Inger, moved from Denmark to India in 1953, where their children, Marianne, Peter and Torben were born. Living in Silver Sands, Pali Hill, Bombay, the family enjoyed a halcyon life by the sea. Weekends at Juhu beach, cocktail and dinner parties at their seaside home, afternoons searching Chor Bazaar for antiques. It was also in Bombay that Hansen acquired his passion for modern Indian painting. He and the family were regular visitors to Gallery Chemould and Pundole Art Gallery, where they met the great Indian modernists – including Vasudeo S. Gaitonde, Ram Kumar and Krishen Khanna – and amassed their superb collection, offered here for the first time.

Featured Highlights from the Collection 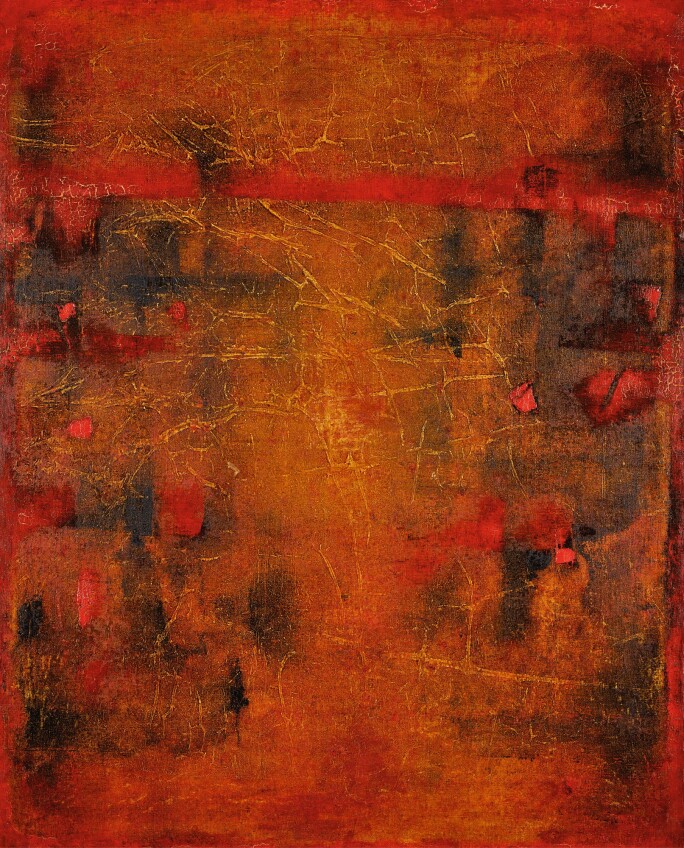 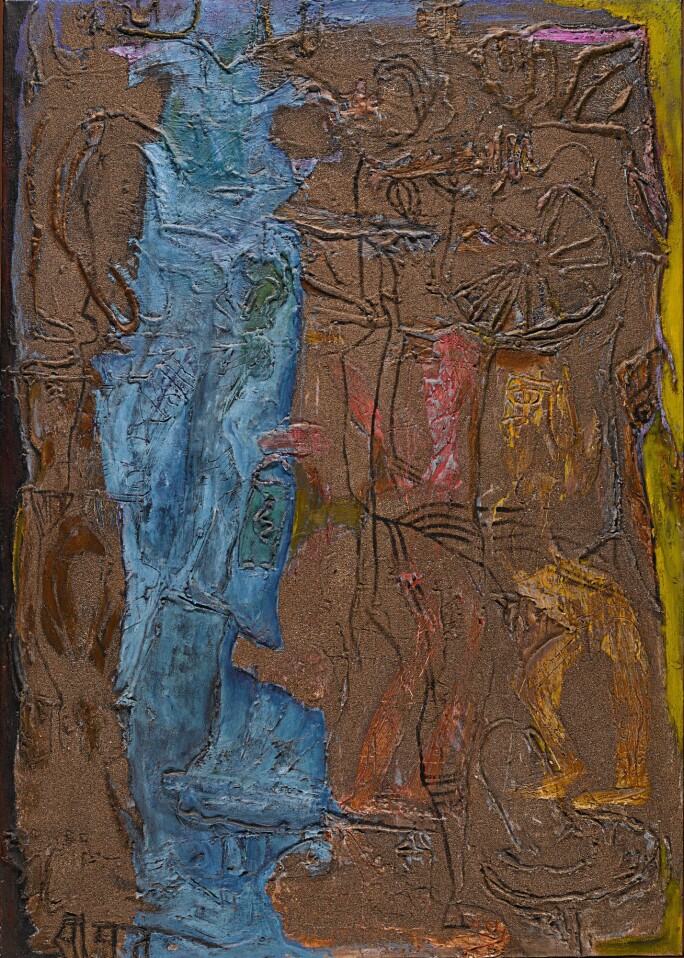 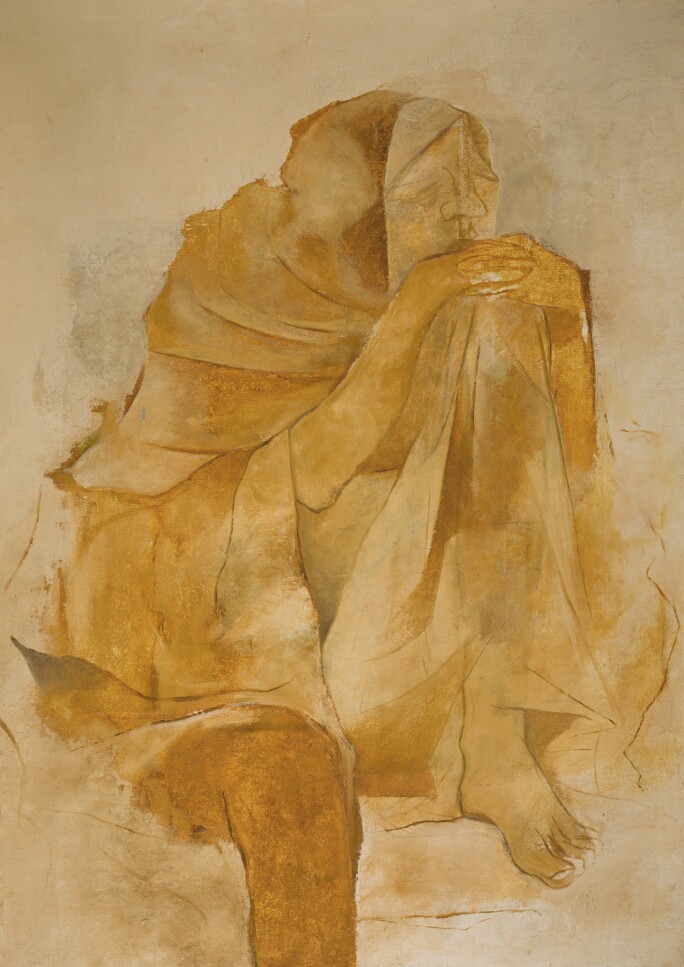 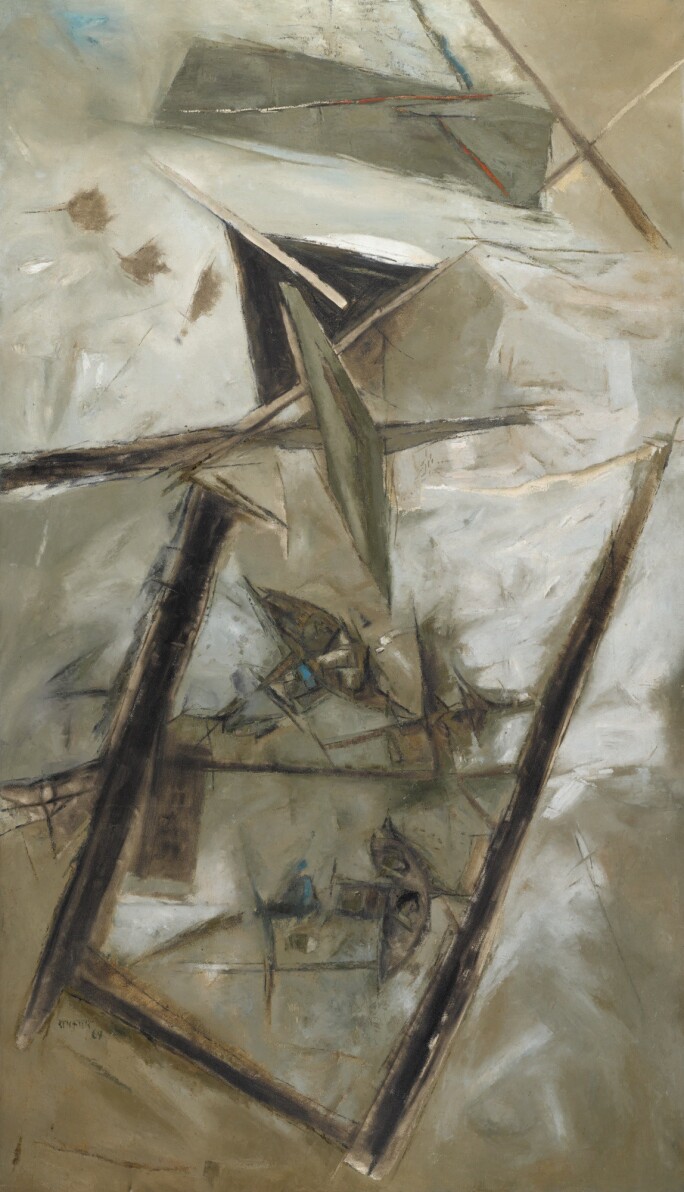 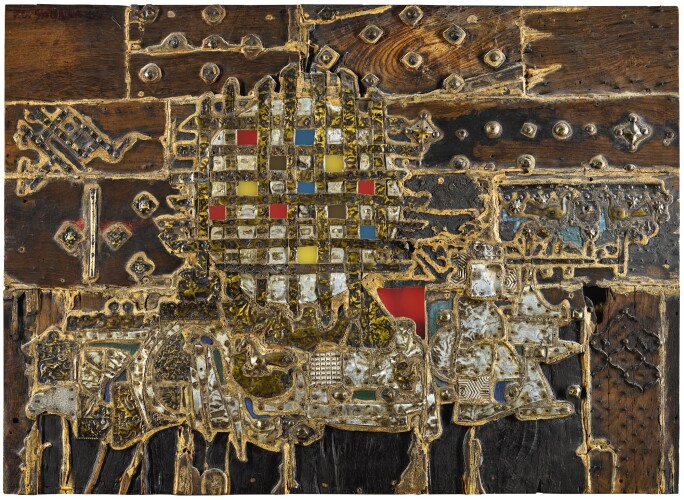 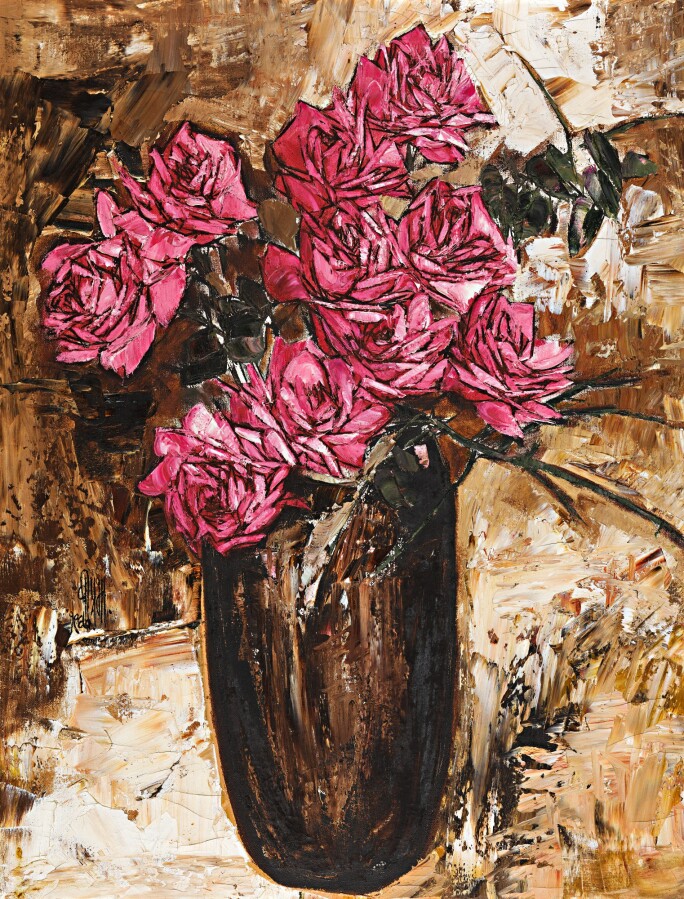 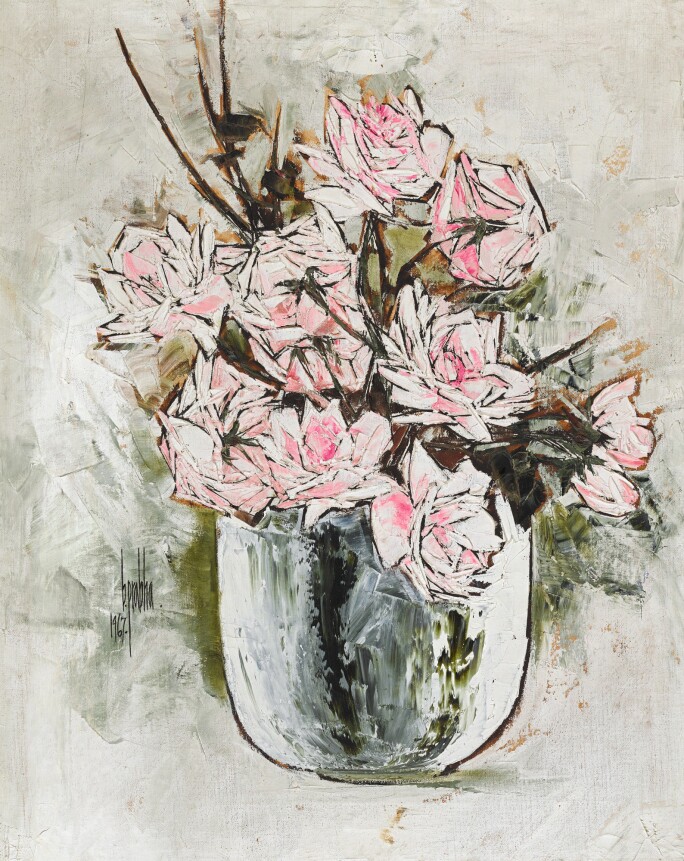 Gunnar Hansen was born in 1925 in Helsingor, north of Copenhagen, a port city famed for Kronborg Castle, the setting of Shakespeare’s Hamlet. Hansen began work as an apprentice electrician in the shipyard next to the castle during World War II. After the war, he began his studies as an electrical engineer at Copenhagen Technical Institute, graduating with a first class in 1947. He next undertook his postgraduate engineering training at GE in Britain, after which followed his military service in the telegraph service of the Danish Brigade as part of the occupation force of Germany. He then worked for a couple of years in Copenhagen, before joining the Danish Electro Technical Export Corporation in 1951.

It was through his work as an electrical engineer representing Danish manufacturers of electrical equipment, that Hansen, aged 26, came to be in India and associated with Larsen & Toubro, an Indian engineering firm founded by two Danes, Henning Holck-Larsen and Soren Kristian Toubro. Hansen was invited to join L&T and he swiftly began heading the company’s emerging manufacturing operations.

Hansen soon made his mark on the company, through its products, equipment and mechanisms. One such example was Hansen’s idea for L&T to produce switchgear on license from one of the Danish companies he represented – LK. It was no mean feat to convince both L&T and LK, but Hansen was adamant that any product could be made equally well in India (indeed, throughout his time at L&T he implemented the high standards he knew from Denmark onto the company’s manufacturing practices). The result was the iconic LT-LK motor starter. 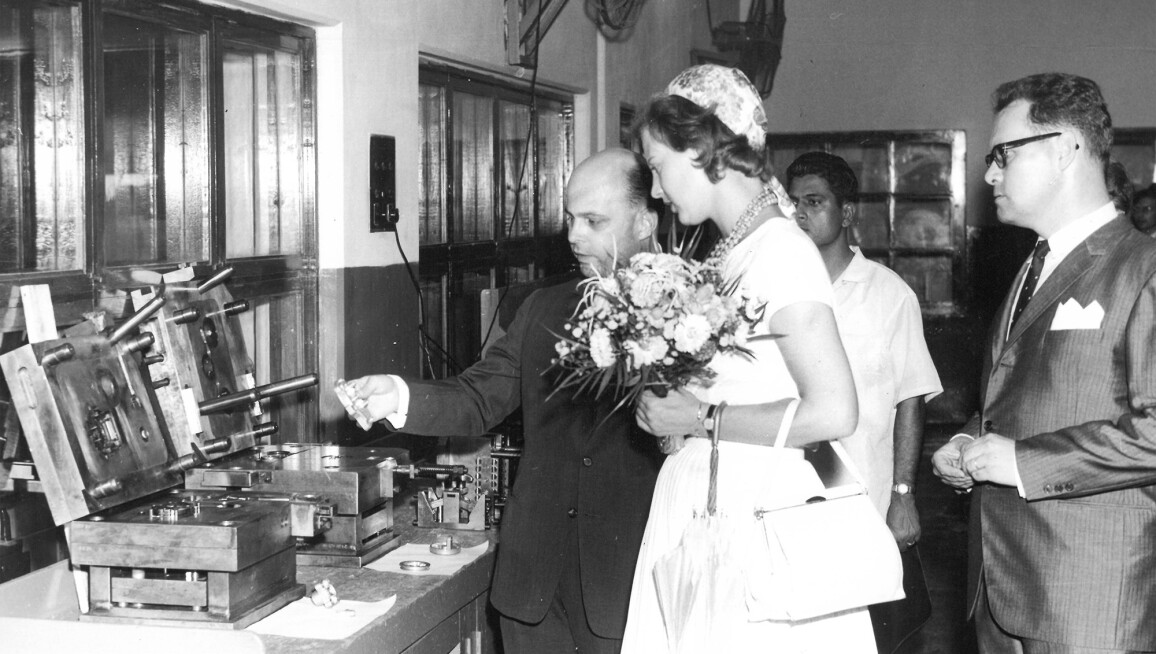 Of course, Hansen’s contribution to L&T went far beyond the products he helped the company make in the early days. After serving as L&T’s General Manager of Manufacturing, he was appointed a Director of the Board of L&T in 1964 and of UTMAL, a joint venture company in Orissa, in 1966. In all of his roles at L&T, Hansen was a prodigious presence, being widely known and respected at all levels of the firm.

“Gunnar Hansen had a deepfelt respect for India, the Indian people and especially his Indian colleagues at L&T, many of whom became his lifelong friends.”

From the start, he held an unwavering belief in what it was possible to achieve in India with professional management, which was to define the company going forward. Central to this was the mindset Hansen created at L&T – arguably his greatest contribution – to strive for nothing short of the best. This represented a revolutionary change of attitude in a country where the predominant approach at the time was ‘Chalta Hai’ (anything goes).

Hansen left L&T in 1974, after 23 years in India, and his family returned to their farm north of Copenhagen. For a few years, Hansen worked in a company related to Soren Toubro, then as Head of DANIDA and the Danish aid program based at the Danish embassy in Delhi. Not enjoying government bureaucracy, Hansen chose to retire in 1981 and concentrated on farming. Through his time working in India, Hansen made an indelible impact on L&T. Remembered as a formidable and fair figure, his strident wish for L&T to strive for and achieve the best has remained with the company to this day, as the seal of both its image and reputation.

The Joy of India: Collecting Memories

“The collection of Gunnar and Inger Hansen was their daily pride and joy, a reminder of their fantastic life and adventure in India.”

In 1953, having been in India for two years, Hansen briefly returned to Denmark. There, Inger, a young secretary at Maersk, caught his attention. After a brief romance, Hansen proposed to Inger at a summer ball, and since time was limited before Hansen was due back in India, they sought a Royal Charter for the wedding to proceed quickly. Soon Hansen returned to India by plane, while his wife followed by ocean liner.

The Hansens moved into a colonial style bungalow on Pali Hill and bought their first car, a Morris Oxford. They quickly immersed themselves in the Bombay life of a newly independent India, enjoying their time as young, successful newlyweds. Their first child Marianne was born in 1955. The family later moved to a seaside bungalow on Carter Road in Silver Sands, before their second child Peter was born in 1959.

Inger looked after the family and was a huge support to Hansen, enabling him to cope with the increasing demands of his job at L&T. In the summer of 1963, while on holiday in Denmark, the Hansens bought a 55-hectare farm, north of Copenhagen. From then on, Inger spent each summer there.

In 1965, their final child Torben was born, and the family moved a short distance to a modern bungalow facing the sea. There they enjoyed a golden period of contentment. Evenings were passed on the veranda with the sea breeze, where Hansen would enjoy a whisky soda and his wife, a Campari soda, while weekends were often spent on Juhu beach. The family went on long walks, swam and visited L&T’s beach shack. Weekends not at Juhu were often spent in Bombay: brunch at the Taj Hotel, a visit to the Strand Book Stall, and a nimbu pani at the Bombay Gymkhana on the way home.

After a brief time living in Kansbahal, a remote village in Orissa, due to Hansen’s work with UTMAL, the family returned to Bombay in 1969. Whilst the Hansens had been interested in Indian art since their arrival in the country, it was from 1969 that they began to build their collection. Through their frequent visits to Gallery Chemould and Pundole Art Gallery, the couple became involved in the Indian arts scene.

When the family returned to Denmark in 1974, their beautiful collection went with them. These remarkable works were daily reminders for Gunnar and Inger Hansen of the glorious twenty-three years they spent in India, a once-in-a-lifetime adventure. 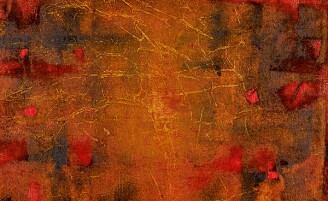 With kind thanks to Peter, Torben, Marianne and Jan Hansen, for their assistance in the preparation of this portrait of Gunnar and Inger Hansen.