The Art and Aesthetics of Patwant Singh, Rasil & Romen Basu


P atwant Singh, writer, publisher, philanthropist, political commentator, and public intellectual, was an iconoclast and a visionary. His extensive art collection is a testament to his extraordinary aesthetic sensibilities, life-long promotion of modern Indian art, and friendships with the artists whose works he acquired.

Patwant’s early education in urban planning came from his father, Manohar Singh, a builder who oversaw the construction of Lutyen’s Delhi in the 1920s and ‘30s. After working with his father, Patwant moved to Bombay (now Mumbai) and in 1953 began publishing the magazine The Indian Builder to highlight both the achievements and weaknesses of India’s burgeoning building industry. As he developed an increasing appreciation of the urban arts, he began publishing and editing the remarkable Design magazine (1957-1988), which provided the first platform for young and established artists and architects from India and across the world to share and debate their ideas concerning architecture, urban planning, graphics, and the visual arts.

The Collection of Patwant Singh

Patwant moved to Delhi in 1962 and built a stunning home, designed by the Canadian architect Luc Durand (1929-2018), to display his remarkable art collection. His circle of friends expanded to include aspiring artists who went on to achieve great renown. Patwant took great pleasure in advocating greater public recognition of their contributions. He was close friends with most of the artists whose works appear in this collection.

Inspired by the New York City Art Commission that was established in 1898 to promote tasteful architecture and public art, Patwant persuaded then Prime Minister Indira Gandhi to establish a statutory body to monitor new building projects, conserve historic structures, and develop aesthetic urban and environmental design. This led to the creation of the Delhi Urban Arts Commission; his dear friend Habib Rahman served as its first chair. However, as he wrote in his memoir, Of Dreams and Demons: A Memoir of Modern India (1995), he was pained by the continued destruction of Delhi’s gracious tree lined streets by rampant urban sprawl.

Every painting in this collection evokes our memories of Patwant: the décor of the living room in which they are displayed reflected his exacting attention to detail. We recall nostalgically many animated, funny, and fiery conversations around the fireplace and dinner table. Patwant never hesitated to criticize the powers that be or to advocate for those who deserved a hearing. He tethered biting wit with deep loyalty to friends and family; pride in Indian aesthetics with cosmopolitanism; and love for the finer things in life with empathy for those who lacked voice and visibility.


Art was always integral to the fabric of our parents’ lives but for each, it was an intensely personal passion. Rasil and Romen Basu nurtured a deep appreciation for many forms of culture – literature, music, dance and the fine arts. They didn’t consider their art collections “investments” or isolate the pricier pieces in exclusive rarified spaces. Their finer Indian works happily shared wall space with the offerings of younger, unknown artists whose paintings spoke to the Basus.

As Rasil’s dear friend Mary Helen Grace, a Des Moines painter recalled, “When we discussed some art she bought, she said, ‘You have to buy what you love and want. Don't set a price tag as your limit. If you want it, work a payment plan out with the dealer.’"

Showcasing art they loved on their walls was the common denominator between their lakeside flat in Trevignano, Italy, their country home in Woodstock, NY, their apartment on the Upper East Side of Manhattan and their permanent home in Delhi, India.

Their interest in art was surely encouraged by the friendships they developed with some of their favorite artists, Satish Gujral, Krishna Reddy and Zarina Hashmi, in their fledgling years. For non-artists, our parents had a disproportionately large assortment of artist friends. Both were United Nations professionals: Rasil, a Yale law school graduate, was tasked with promoting human rights and, later, gender equality around the world. Romen was in charge of economic development in the global South, specifically Asia.

With few other Indians in the U.S. in 1960s and ‘70s New York where they were based, their friendships included an eclectic mix of nationalities and professions who had made New York their home or came to visit. Our parents loved entertaining, and dinner parties at our Manhattan apartment would bring together artists, writers, intellectuals, diplomats and business leaders engaging in lively conversation over wine and Indian food. At their Delhi garden parties, it was usually Scotch that flowed and staff that cooked.

As a couple, they didn’t always gravitate to the same pieces. Rasil could spend hours reading up on art movements and be equally excited by modern and Moghul, abstract and Realist. Art was for her relaxing, energizing and intellectually stimulating. She spent frequent afternoons developing her discerning eye devouring a show at the Met, the MoMA, the Guggenheim or the Frick.

“She explained the difference in subject matter of Moghul paintings compared to ones done later in the Moghul style,” recalled Grace who got to view some of Rasil’s collection from that period. “The Moghul artists came from Persia and brought great delicacy, and intricacy with their one-hair brush stroke style to portraits and war scenes and pageantry. “

A poet and novelist in his spare time, Romen travelled widely for work and appreciated local art with an anthropological eye. He might return with a painting, sketch or wood carving rooted in a place: a smoky black-and-white of a fisherman out on a small wooden boat on a tranquil Vietnam morning; a vibrant South Seas rendition of a bare-chested tribal leader adorned with necklaces symbolizing his triumphs. 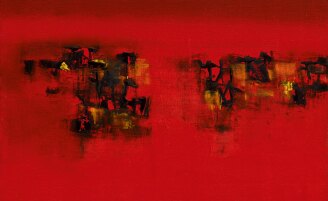