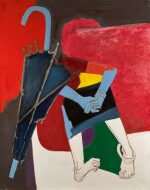 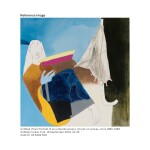 Signed 'Husain' in English, Devanagari and Urdu on reverse

A metaphoric staple in Maqbool Fida Husain's œuvre, the umbrella is a theme to which the artist has returned throughout his career in a variety of media – from watercolour to oil on canvas, as well as in his award-winning 1966 film, Through the Eyes of a Painter. In this short film, an umbrella appears alongside trademark Husain objects such as a lantern, a model tiger and a veiled woman – the proximity of placement suggesting the primacy and poignancy of this object to Husain.

Daniel Herwitz remarks: 'Husain's body of work, like a human personality, is stamped by both strongly characterising traits (pictorial and thematic), and by recurring symbols and attractions. These stylistic continuities play a crucial role in accounting for its identity... Husain's is a search for himself, but also for the resources and style with which to voice his subject: India. The vicissitudes of his work are those of himself and of India itself. His task of being contemporary to India... is one demanding a plasticity of the canvas open to the plasticity of its subject… In order to address the common people, he paints umbrellas rather than painting people directly, in the manner of social realism. In [the Portrait of an Umbrella series] the lives of ordinary people are evoked through poetic portrayal of an object – the umbrella – which is their metaphor. It, like them, is common and close to hand, yet equally unnoticed and unportrayed. Husain brings these people to life through that symbol: 'the umbrella is the centrepiece, the multitude, yet each person alone.'' (D. Herwitz, Husain, TATA Steel, Bombay, 1988, p. 28)

The current lot is from Husain’s Portrait of an Umbrella series. In this group of works, Husain has captured all the different functions associated with this object and what as a metaphor it could mean to different people. Rashda Siddiqui’s book captures some of these: his memory of his grandfather who used to take him to school ‘umbrella in one hand and Maqbool’s hand in the other,’ the vegetable seller protecting her son from the scorching heat, Queen Victoria and her favourite manservant with an umbrella, among others. The current lot depicts a village woman whose face is obscured by the umbrella; it has been rendered in strong lines and flat planes of primary colours.

It lies folded, the umbrella.

Its few metal ribs may not respond

to its ageless shadow.

Though a thin wooden stem tries to uphold

the burden, of burning streaks of light

The black spreads like spilled ink on blotting paper.

The umbrella lies in its fold

Men, women come and sit around

The umbrella, then slowly turn away.