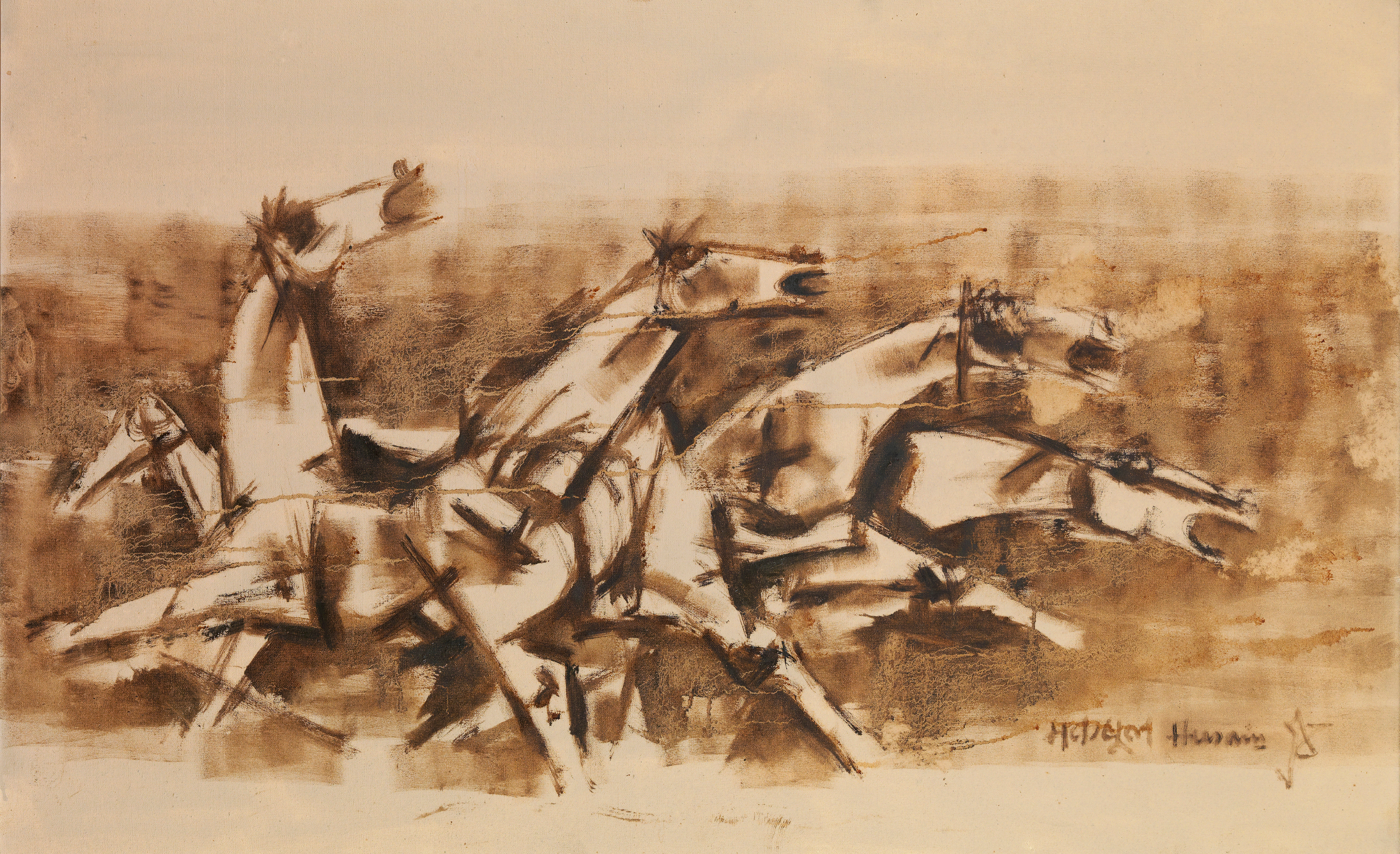 From an early age, Maqbool Fida Husain held a powerful fascination with horses, ‘observing and drawing horses in their perfect form and likeness using coal or pieces of chalk on the walls of his school and in his notebooks.’ (R. Siddiqui, M.F. Husain: In Conversation with Husain Paintings, Books Today, New Delhi, 2001, p. 110)

In 1952, Husain travelled to China where he studied the pottery horses of the Song dynasty; these horses from myth and legend became the building blocks for one of the artist's most enduring themes. In China, Husain also met the painter Qi Baishi, an artist known for his monochromatic paintings of animals with a minimalist use of line to achieve form and movement. This condensing of mediums and minimal application greatly inspired Husain.

In Europe, Husain ‘was strongly attracted by Blaue Reiter artist Franz Marc, and by Marino Marini's neo-classical equestrian sculpture. Husain's own use of the horse motif has been, however, even more intuitive and complex...’. (R. Bartholomew and S. Kapur, Husain, Harry N. Abrams Inc. Publishers, New York, 1971, p. 39) In 1965, Husain visited Iraq and made a pilgrimage to Karbala, to witness the battleground upon which Imam Husayn fell. This was a time of deep spiritual contemplation for Husain. During the mid to late 1960s, as Daniel Herwitz notes, Husain's ‘horses now appear riderless, without the accompanying light-bodied female figures, and are frequently transfixed by arrows.’ (D. Herwitz, Husain, Tata Steel Publications Co. Ltd. Bombay, 1988, p.48) The impact of Husain’s Chinese, European and Iraqi sojourns can be seen in the current painting. He felt that the challenge in art was to create forms in the simplest manner possible. This painting appears to be strongly influenced by ink scroll paintings and their calligraphic brushwork.

Here, four horses are shown in tumultuous gallop, their elegant strides displaying immense power, a testament to Husain’s ability to depict a sense of movement through his lines. Arguably one of India's finest draughtsman, he was known to finish a work in one sitting. Like the ink scroll paintings, the lines were drawn directly with a paintbrush leaving no room for error. This painting is brilliantly rendered in the artist’s immediately recognisable calligraphic style and monochromatic palette, and serves as a fine example of the extreme confidence with which Maqbool Fida Husain applied his brushstrokes.