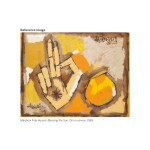 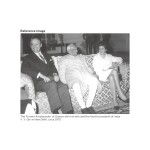 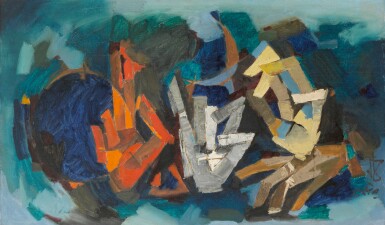 The current owner lived in New Delhi in India from 1970-1973 as the wife of the Greek Ambassador. They were given lodgings at the Oberoi where the walls were bare. Charmed by Husain's paintings that were being sold at the hotel, she bought three works, all different in style and subject matter.

‘Some of Husain’s symbols are drawn from folk art and are traditional. His manner of using them, however, while retaining the original impulses, takes them beyond their original simple meanings. The human hand for instance, an expressive symbol in Indian dance, recurs frequently in Husain’s paintings. It is usually given an independent life, almost separate from the body to which it belongs. It occurs with mystical markings on the palm, is lightly made, sometimes deeply shadowed, enclosed as though upon a secret.’ (S. Kapur, Husain, Lalit Kala Akademi, New Delhi, 1961, p. vii)

In many of his works Maqbool Fida Husain draws postures and hand gestures from classical Indian sculpture and dance. One such gesture was a mudra, a pose typically performed with the fingers and hands, and one which was reworked to become a personal symbol for the artist. The multiple hand gestures in the current lot appear to be adaptations of the prana mudra, a symbol of healing in the Indian yogic tradition. Prana is also associated with the sun and so the cobalt circle is symbolic of the sun and its the life-giving forces.