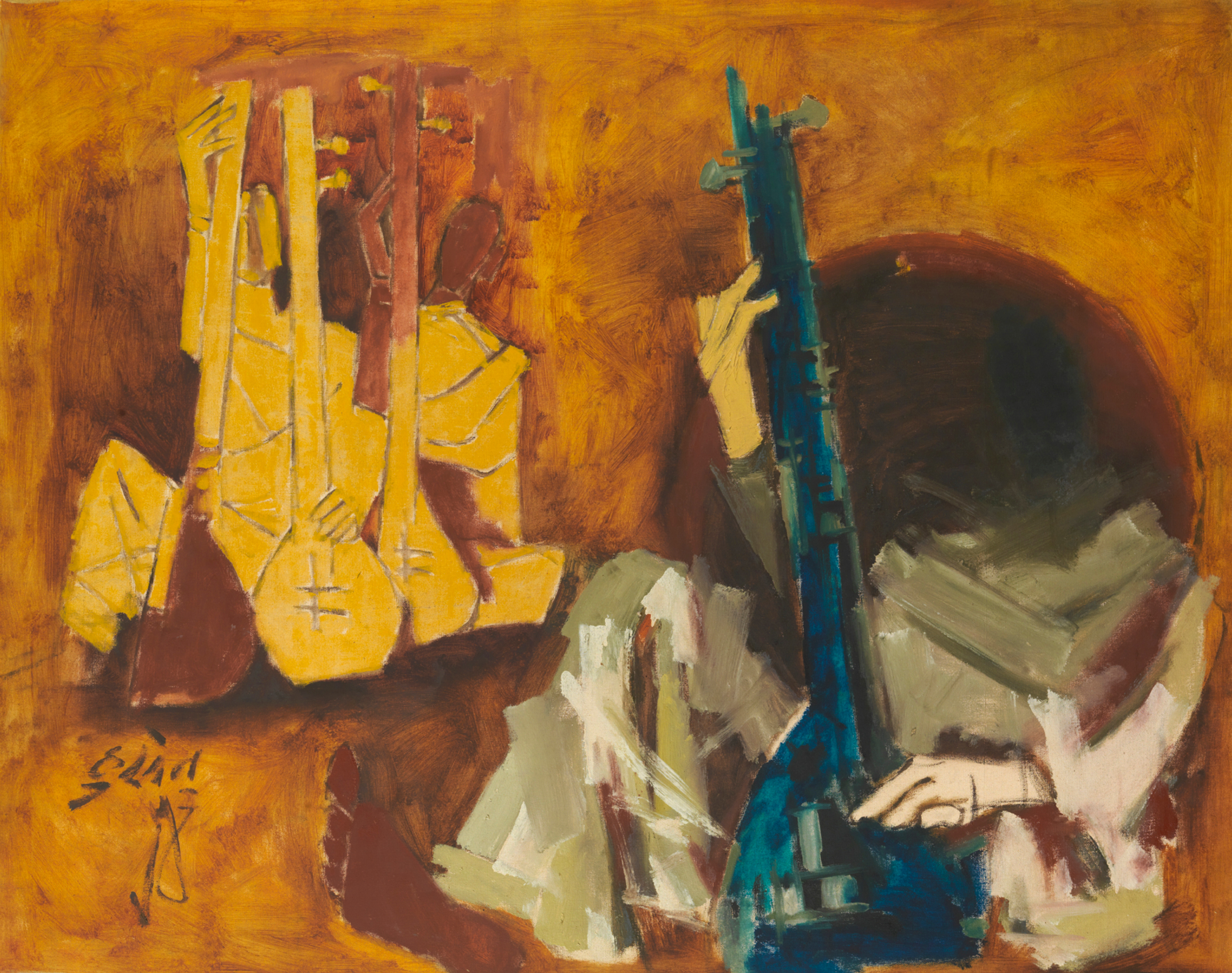 The current owner lived in New Delhi in India from 1970-1973 as the wife of the Greek Ambassador. They were given lodgings at the Oberoi where the walls were bare. Charmed by Husain's paintings that were being sold at the hotel, she bought three works, all different in style and subject matter.

‘[Maqbool Fida Husain] reacted almost instantaneously to events and things… was mesmerized by the ancient traditions of Indian dance and music, painted singers and dancers, responding to the syncretic customs that had made the subcontinent a cradle of spirituality. He was, first and foremost, Indian, rejecting the call and lure of other lands when his peers were settling in London and Paris, New York and Copenhagen.’ (K. Singh, MF Husain: The Journey of a Legend, Stellar International Art Foundation, Geneva, 2014, p. 20-21)

Ragamala paintings in the classical tradition are visual interpretations of Indian Musical modes, each Raga relating to a specific emotion. Within this modern interpretation of the theme, the present work is filled with musicians, the warm palette evocative of the Indian miniature tradition. Like classical Indian paintings, the symbols and colours in Husain’s work provide an unwritten code that offer glimpses to their meaning. The current lot is stylistically more fluid and gestural than his earlier works. The muted browns and ochre remain the dominant colour, giving this painting a mood of quiet melancholy, perhaps reflecting the longing for an absent lover, the theme of numerous ragamala miniatures.

Such a painting was not intended to represent a concluding statement but forms part of an ongoing process that fulfilled Husain’s own need to articulate what he experienced. Even within the broad spectrum of his work, his visual and metaphorical associations evolve naturally over time so that his own iconic symbols are constantly evolving and reinvented to suit new moods and artistic modes of expression.

'Husain views each painting as a fragment of music whose counterpoint exists elsewhere, and his entire painterly activity as one immense effort at orchestration of all the notes that he hears struck upon his personality. No painting is intended as a complete statement. In a continuing inquiry into the nature of being, every one of his wide array of works, joyous or grave, leaves the viewer with an intimation of other possibilities.' (R. Bartholomew and S. Kapur, Husain, Harry N. Abrams Inc. Publishers, New York, 1971, p. 60)

Husain's work from this period is not formalistic. Here, flat blocks of colour have been abandoned in favour of a subtler layering of hues and texture that results in a more mature version of the subject. The figures, postures and symbols are drawn from the artist's own visual library and then reworked and re-animated in new ways, twisting old meanings or reinventing meanings for a contemporary audience. This process is not merely derivative - traditional forms from classical Indian sculpture, miniature painting or tribal and folk art are absorbed into the artist's consciousness and then adapted before manifesting themselves in his art.