THE TWO YEARS that Vincent van Gogh spent in Paris, beginning in 1886, marked one of the most transformative periods in his career. Arriving from Antwerp, he soon encountered the work of the Impressionists and the Parisian avant-garde. “What people demand in art nowadays is something very much alive, with strong colour and great intensity,” he wrote to his sister in the summer of 1887.

Van Gogh lived with his brother Theo in Montmartre, a bohemian quarter being colonised by artists’ studios and entertainment venues. The peculiar urban yet rural atmosphere of the Montmartre “maquis” – a side of the district filled with vegetable gardens, abandoned quarries and grassy wasteland – fascinated the artist and he was especially drawn to the quaint windmills, some now repurposed into cabarets and other places of leisure popular with artists.

In Scène de rue à Montmartre, van Gogh depicts the famous Pepper Mill, also known as the “Moulin Debray”, located within the enclosure of the Moulin de la Galette. He uses this subject, which he includes in two more works from this time, not only to capture a vibrant and original view of the areas but also to further the plastic revolution spurred on by his artistic encounters. Emboldened by the new artistic styles of artists such as Paul Signac and Claude Monet, van Gogh was transforming his own painting through a mastery of colour, light and composition. It was in Montmartre, during the spring of 1887, that he finally lay the foundations of his inimitable style.

This painting captures the distinct atmosphere of Montmartre at the end of the 19th century when the mills, no longer in operation, had become tourist attractions and places of leisure where Parisians came to mingle, drink, dance and relax.

Van Gogh’s artistic evolution is exemplified by the milky blue of the sky rubbing shoulders with the greens and mauves of the fence. His technique also develops, the graphic character of the fence contrasting with the free and removed touch of the rest of the composition.

Surrounded by artists, dancers, musicians, actors and writers in Montmartre, van Gogh abandoned the dark palette that dominated many of his early paintings in Holland and replaced it with a newfound love of colour.

The mill is depicted as seen from the “Impasse des deux frères” with the entrance of the Moulin de la Galette enclosure topped with decorative lanterns, and a carousel visible behind the wooden palisades.

Van Gogh met artists such as Toulouse-Lautrec, Paul Signac and Paul Gauguin who inspired him to incorporate Impressionism into his artwork resulting in lighter, more colourful paintings and new brushstroke techniques. 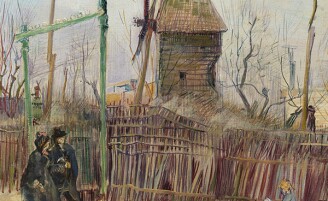