The Enduring Power of Rembrandt

V incent van Gogh first came across Rembrandt van Rijn’s The Jewish Bride when he visited Amsterdam’s newly opened Rijksmuseum in October 1885. He was filled with uncontainable excitement. “One must have died many times to paint like this,” he wrote to his brother Theo of the 1665 work, which depicts the Biblical couple Isaac and Rebecca locked in a tender embrace. “Rembrandt goes so deep into the mysterious that he says things for which there are no words in any language.”

Three hundred and fifty years on from Rembrandt’s death, this allusive artist continues to captivate those who lay eyes upon his work. In 2019, museums across Europe – from the Rijksmuseum in Amsterdam to Dulwich Picture Gallery in London – are marking this anniversary with exhibitions that offer a rare chance to see his finest works side by side. 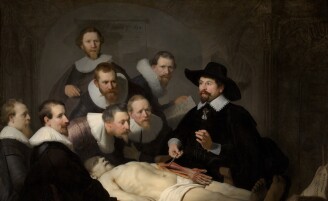 Museums
Rembrandt Around the World: Exhibitions on View in 2019

As with many great artists before him and since, Rembrandt’s reputation has been marked by changing opinions. He was seen as an unrivalled genius by the middle of the 18th century, a Romantic visionary in the 19th century, and an obscure figure inseparable in style from his students in the 20th century (an uncertainty that gave rise to the Rembrandt Research Project and its Corpus of Rembrandt Paintings from 1968, which has reduced his authenticated output from what was once more than 600 paintings to around 300).

But the artist, whose turbulent career saw him rise to fame only to end up dying penniless and a pauper, has transcended these changing tastes and uncertain attributions. In his ability to carve out the personalities of his sitters, and grasp what paint can offer as a tool for storytelling, he has become, as the art historian Stephanie Dickey put it, “a synonym for greatness”.

Rembrandt was born in 1606, at a time when economic prosperity across the nation had helped bring about the Dutch Golden Age of painting. The works that curators and the public pour over today are largely a result of the relationships he built with the leading patrons of the time. He earned many commissions on the basis of his singular chiaroscuro style, and, never a man to shy away from his own reputation, even added a “d” to his name in 1633, seemingly deliberately transforming it into a play on the Dutch words rem (obstruct) and brandt (light).

It was during this fruitful period of his career that he made what is considered by many to be his masterpiece: The Night Watch. Commissioned in 1640 by the leader of the civic guard, Captain Francis Banninck Cocq, and completed in 1642, it depicts Cocq leading a group of militiamen out on patrol in Amsterdam. The painting’s original title was somewhat more literal: Militia Company of District II under the Command of Captain Francis Banninck Cocq, with The Night Watch being a nickname derived from the varnish that once slowly darkened its surface.

The Night Watch is renowned for the unprecedented manner in which Rembrandt animates the figures – from the captain himself in the foreground to the glowing girl to his right, and even the pair of eyes popping up behind some shoulders at the back, which many believe belong to the artist himself. From July, The Night Watch will be restored live at Amsterdam’s Rijksmuseum, and the public can watch the painting be brought back to its original glory both via web stream and up close in the gallery itself.

Rembrandt van Rijn's 'The Night Watch', A Masterpiece with a Violent History

It was upon the completion of The Night Watch, however, that everything changed for Rembrandt. His beloved wife, Saskia, died that same year, and suddenly the artist’s commissions began to dry up. Not exactly known for his frugality – he had one of the largest workshops in the Netherlands and had spent an astonishing 13,000 guilders on a lavish house in 1639 (now the Rembrandthuis museum) – Rembrandt soon found himself bankrupt. He never recovered his wealth, but, fortunately, he was far from done with his painting: canvases that followed include harrowing portraits of the ancient Roman figure of Lucretia; and the evocative The Return of the Prodigal Son, c.1668; and, of course, The Jewish Bride. “The world which thought it knew Rembrandt hadn’t seen anything yet,” Simon Schama said in his 2014 BBC documentary on the artist’s late works. “I think he saved the best for last.”

Yet for Schama and the many others who have sought to understand Rembrandt’s genius, the artist left little in regards to his own thoughts or philosophy. In a society in which the legendary status of artists such as Van Gogh, Frida Kahlo and Paul Gauguin are greatly enhanced by the bursting archive of letters that they left behind, the closest thing to an artistic raison d’être from the great Dutchman is the description he offered to a potential patron, the Stadtholder, describing what he sought to achieve. It amounted to just six words – “die meeste ende die natureelste beweechlickheyt”, or “the greatest and most natural movement”.

It is to Rembrandt’s art, in a variety of exhibitions and also permanent collections that audiences can turn this year. To the drama of The Blinding of Samson, 1636 (held by the Städel Museum, Frankfurt); to the alluring ambiguity of Aristotle with a Bust of Homer, 1653 (at the Metropolitan Museum of Art, New York); and, perhaps most tellingly of all, to the many self-portrait, which together chart Rembrandt’s journey from sprightly youth (Self-Portrait, 1628, at the Rijksmuseum, Amsterdam) to regal connoisseur of all things painterly (Self-Portrait, c.1665–69, at Kenwood House, London).

These works seem to tell us as much about the artist – who was buried in an unmarked grave in 1669 – as any letter could. And it is this skill that, even 350 years on, few artists have been able to match. “It is with justice that they call Rembrandt magician,” continued Van Gogh. “That's no easy occupation.”