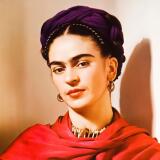 Works by Frida Kahlo at Sotheby's

Magdalena Carmen Frieda Kahlo y Calderón, known as Frida Kahlo, was born on the outskirts of Mexico City in 1907. As a child Kahlo planned to study medicine, however in 1925, at the age of eighteen, she was involved in a bus accident that nearly killed her and from which she never fully recovered. Kahlo was confined to her bed for months afterwards and during this time she began experimenting with the self-portraiture that would define her oeuvre. From this time on, she devoted herself fully to art and her arduous, and often painful, convalescence would become a recurrent theme in her work.

In the years that followed, the outspoken Kahlo joined the Mexican Communist Party, and increasingly involved herself in the art world of Mexico City. Through the Mexican art scene she became acquainted with the painter Diego Rivera in 1928 — the two had briefly met once before, years earlier at her preparatory school. The unlikely pair quickly became romantically involved and they were wed in 1929. The hulking, six-foot Rivera was twenty years Kahlo’s senior – Kahlo’s mother cuttingly described the couple as “the elephant and the dove.” After their nuptials, Kahlo began working on her painting full-time, developing her now iconic – and often difficult to categorize – style. While some considered her a Surrealist, and Rivera described her as a realist, Kahlo never identified with any specific movement, instead saying “The only thing I know is that I paint because I need to, and I paint whatever passes through my head without any other consideration.”

After encountering Kahlo’s work while traveling in Mexico City in 1938, father of Surrealism André Breton facilitated her first solo show in New York City. Traveling to Manhattan dressed in the traditional Mexican costume that she adopted in her mature period, Kahlo caused something of a media sensation. Following her foray to New York City, she visited Paris to exhibit in a Surrealist exhibition, but she was put off by the group’s hyper-intellectualism, and returned to Mexico.

Upon her return, the ever-tumultuous Kahlo and Rivera divorced, only to remarry the following year in 1940. Kahlo’s health deteriorated steadily in the years that followed and she was largely unable to travel due, however her work garnered increased attention and acclaim internationally with paintings included in numerous group shows throughout North America. By 1950 she was dependent on a wheelchair, but she still continued to paint and engage in politics. In the year preceding her death in 1954, she had her first solo show in Mexico at the Lola Álvarez Bravo gallery, where a four-poster bed was placed in the center of the gallery so she could lie there for the opening.

Museums with Works by Frida Kahlo

Artist Image: Credit: Jeronimo Alba / Alamy Stock Photo
Please note that prior performance of the indexes and realized returns contained herein does not guarantee future results. In addition, there is no guarantee that random collections of individual works of art or stocks will yield index returns. We are not financial advisors and we are not in the business of recommending art as an investment. We also have no comparative advantage in forecasting the future direction of the art market. Investment decisions should be based on the risk return tolerance and time horizon of the investor with, if desired, the support of a licensed financial advisor. This information is provided "as is" and with no representations or warranties either express or implied of accuracy, merchantability, fitness for a particular purpose or of any other nature are made with respect to this information or to any expressed views presented in this information.