S nuff was introduced to China around the late 16th to 17th centuries. A form of pulverized tobacco, it was considered a luxury import from the West. While aristocrats in England and Europe would keep the snuff on their persons in ornamented hinged boxes, airtight bottles were better suited to the comparatively humid climate in China. Since the practice of snuff-taking was very much the province of the fashionable Qing dynasty elite, the pocket-sized bottles would be made of precious materials and decorated in a manner befitting the carrier. Over the centuries the designs would become ever more elaborate, and the snuff bottles would be regarded as objects of high value, exchanged to mark social ties or presented as gifts from the imperial court. Although snuff-taking eventually fell out of fashion, bottles continued to be sought after as collectors’ items.

The portability of these small objects enable enthusiasts to present an entire range of artistic development in the Qing dynasty. The finest collections are more than the sum of its miniature parts – together at a glance telling the story of the wealth and power of the last imperial dynasty of China. The following collection of snuff bottles was formed by a couple in Hong Kong with a passion for Chinese art. They began collecting in that golden era from the late 1960s to early 1970s, regularly dining out at fine restaurants with Y.F. Yang, and then finishing the evening with an acquisition of a superb snuff bottle or two on offer. At the time, a great range was available, high quality bottles from antiques to contemporary masterpieces. Below are just a selection from the collection to go under the hammer at the upcoming Chinese Art sale on 29 November. 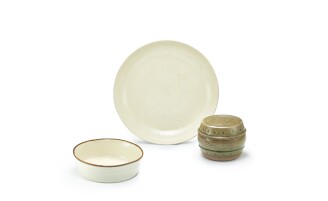 The personal style of the collection is apparent, with favourites such as a delightful amber pig originally sold by H.R.N. Norton at Sotheby’s London in 1963. This collection of snuff bottles encompasses a great diversity of media and subject matter and is notable for their sheer quality of glass bottles. An extremely rare Imperial enamelled porcelain snuff bottle shows a scene of quails amidst millet, and appears to be one of two missing bottles from a set of ten originally in the Qing court collection. Seven of the ten are now preserved in their original box in the National Palace Museum, Taiwan.

These snuff bottles are typically made of crystal or glass, and the interior surface of the bottle served as the canvas for the minuscule painting. Painting from the inside of the snuff bottle would require the highest level of skill, as the artists would apply the decoration using a narrow brush of one or two bristles. These works are a technical wonder.

This collection is notable for the sheer quality of glass bottles. Glass is the most popular type of material owing to its versatility; it has wide range of colour and can imitate the properties of jade, crystal, stone, and amber. Glass snuff bottles feature overlay glass technique, in which layered glass of different colours are carved in low relief.

Antique enamelled snuff bottles show the broad range of Qing dynasty works of art in miniature. The application of the enamel on porcelain, glass or other materials require technical virtuosity and skilled workmanship. Examples from the collection include: a famille-rose lone horse (a very rare subject matter), a glass ‘bird and flower’ botting bearing the Guyue Xuan mark, and one with a scene of butterflies hovering over flowers, likely one of 40 created by Wang Xisan in 1964.

This type of stone was favoured in snuff bottles, because agate was less prone to shattering than glass in colder climates. One of the distinguishing characteristics of the Zhiting School bottles is the serrated style of rocks. Zhiting is the name of a Suzhou artist from the mid-18th century who signed his name to works, including an agate ‘immortal and monkeys’ snuff bottle in this collection. Carved by imaginative and skilled hands, a different snuff bottle from the Suzhou School depicts mandarin ducks amidst lotus and other flowers, with the dark brown inclusions skillfully incorporated into a lively exterior scene.

The quintessential Chinese stone, jade has an important place Chinese art and jewellery for millennia. No collection would be complete without a representative selection of jade snuff bottles.

Red amber is fossilized tree resin that’s millions of year old, and associations with longevity make it a particularly treasured material. Amber snuff bottles have a pleasing tactile quality, and they’re smooth and remarkably lightweight. While snuff bottles are often glass, porcelain, agate and jade, fine examples are made of other precious materials including tourmaline, coral, quartz, crystal, chalcedony, and more.

Many snuff bottles feature the natural design of the stone itself without embellishment. A unique example is puddingstone, which is a conglomerate of pebbles cemented together in a matrix over billions of years. The stones are often of contrasting colors and shapes. Also in the collection is a rare bottle made of a black jade, retaining its original pebble form. Many of the other examples have little or no carving and instead showcase the beauty of the natural stone.