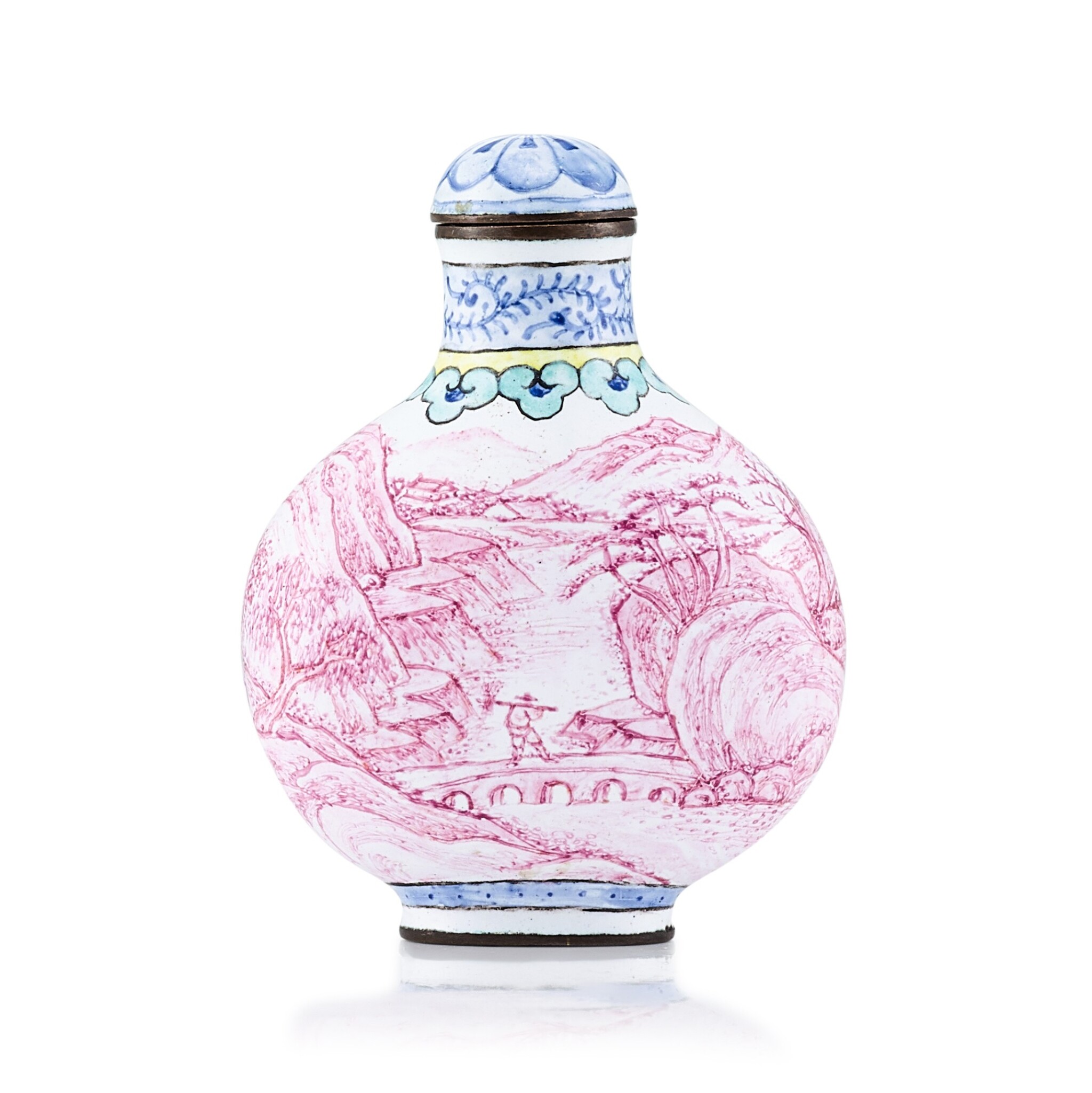 Mark and Period of Qianlong

Both of the narrow sides have slight dents with small areas of repainting, visible under UV.

The present snuff bottle is a fine example of a snuff bottle produced in the Enamel Workshop within the Zaobanchu (Imperial Household Department). The puce enamel scenes may be attributed to the influences of European enamelled pieces which were imported to the Court, often as a tribute to the Emperor. The style of painting on the bottle is also closely related to the 18th-century prints and engravings from Europe, especially in the stippling effects to produce shading and differentiation of depth and form in the landscapes. Prints of such idealized landscapes populated with small figures began to be produced in France around 1750. The use in Europe of puce as the monochrome colour against white in enamels on copper seems to have developed much later than on porcelain, often depicting chinoiserie scenes within raised gilt rococo frames. These can usually be dated to after 1750.

By the reign of the Qianlong Emperor, enamellers at the palace workshops had mastered the manufacture and painting of fine overglaze enamels. The finest quality puce enamelled landscapes were found on ceramics, glass and copper wares with Qianlong marks, and appear to have been made at the imperial ateliers during his reign. The Qianlong Emperor demanded technical perfection, and was willing to expend considerable sums to obtain both innovative and artistically superior pieces. To produce puce enamel of high quality and consistent colour, such as this present snuff bottle, would have been very costly, and to paint a complex landscape would have challenged even the most skilled of enamellers.

The origin of puce monochrome landscape colour in Chinese artistic production is seen in an early manifestation on porcelain on a Yongzheng bowl, from the Eugene Fuller Collection in the Seattle Art Museum, illustrated in Asiatic Art in the Seattle Art Museum, Seattle, 1973, pl. 160, where Chinese-style landscapes are finely painted within leaf-shaped panels on a mille fleurs ground.