F asten your seat belts for the Pierre Bergé sale this October. Described as “a passionate and voracious collector” by Madison Cox – Bergé’s widower – the businessman was as legendary for his taste as he was for his sharp tongue, fierce feuds and quick wit. The sale will consist of 800 lots taken from what Cox terms “rue Bonaparte and other homes that made up Pierre’s private universe”. Featuring exceptional pieces by Jean-Michel Frank, Francois-Xavier Lalanne and Pablo Picasso, as well as paintings by Bernard Buffet, Jean-Baptiste Debret and Jean-Jules-Antoine Lecomte de Nouÿ, it promises to be as eclectic and exciting as the man himself. Short, powerful and pugnacious, the Savile Row-clad Frenchman was ever aware of his reputation, claiming, “people may hate or love me, but they all want to brag that they once sat next to me.”

Cox describes his late husband, who was driven by curiosity and enthusiasm, as “a kid in a candy store about everything”. “There was a certain element of ‘damn, I can have that. I wasn’t born a Rothschild but I’ve got my Chantilly dinner service.’” A Bollinger Bolshevik who never hid his modest origins – Bergé’s father was a tax collector and his mother a state schoolteacher – he was a proud member of the socialist party but lived extravagantly. “Pierre didn’t usually ask the price until afterwards,” Cox says. Nor was Bergé from the haggle-and-bargain school. “I once dragged Yves [Saint Laurent] and him to [Parisian flea market] Les Puces and they were miserable. Miserable.” Monsieur Bergé had his standards. When he invited a large group of friends to Prunier, his Parisian restaurant specialising in caviar, and someone ordered a grappa, Bergé barked, “this is not a pizzeria!” 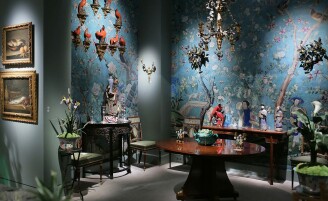 As stated in Bergé’s will, all the proceeds from his collection will benefit the Fondation Pierre Bergé – Yves Saint Laurent. “One of the lessons that I learned from observing Pierre… was don’t become sentimental about things and objects; attach sentimentality to people and projects,” says Cox, the foundation’s president. “You know me, I don’t live with 18th-century Chinese plates for my scrambled eggs. Maybe I should, but I’m not going to start now.”

Cox’s boyish, preppy looks and welcoming West Coast manner mean that it’s difficult not to charmed by the 59-year-old. He chose to be interviewed at 5 Avenue Marceau in the Fondation’s Salle de Réunion, a room that is elegantly stark apart from one vast portrait of Saint Laurent by the photographer Irving Penn, in which the couturier mischievously covers his face with his hand. Even considering Cox’s position as the inheritor of the Bergé kingdom, he is far too wry to become pompous or defensive. This is best explained by the fact that Cox bravely held his own with Bergé, a notorious bully, whom he met in the winter of 1978. “We spoke almost every day, apart from the five years when we weren’t on speaking terms,” he says.

Professionally, Cox is a prize-winning and internationally recognised garden designer with clients such as the Aga Khan, Marella Agnelli and the hotelier Ian Schrager. But when it comes to running the foundation, Cox’s goal is to “restructure the organisation, make it healthy and coherent and then go back to my work, which is what I love to do”.

There are two foundations: the Fondation Jardin Majorelle, which runs the wildly successful Musée Yves Saint Laurent Marrakech and which Cox defines as “autonomous” (“if I was hit by a bus tomorrow, it could continue forever”) versus the Paris foundation, his “biggest problem”. “I’m not worried about tomorrow, but I’m worried about 25 or 50 years from now,” Cox says. His plan is to extend the present Musée Yves Saint Laurent Paris by freeing up the space currently devoted to its immense archives. The archives will be moved to another location outside Paris that will be accessible to the public. “It’s an ambitious project,” he says.

Then again, Pierre Bergé was an ambitious collector. Nicknamed “the dean of Yves Saint Laurent” by the New York Times, it would be reasonable to presume that he was one of those aesthetes seeking perfection. Far from it. “Pierre was a butch brute,” Cox says. “He had great respect for Yves and for musicians trying to perfect their craft and creation, but his taste had nothing to do with style, and that’s why his collection was sometimes quirky because, at any turn, he could go left or right.” And in spite of being a culture vulture and a journalist’s dream – the highly quotable Bergé composed his thoughts in paragraphs – he was self-taught. “Pierre never received his bac [the French equivalent of A Levels] and was driven by that,” notes Cox.

Professionally, Bergé was “easy to work for because he knew exactly what he wanted”. Or so the French interior designer Jacques Grange discovered when decorating several of Bergé’s homes, such as the “Datcha” in Normandy, the Mas Théo in Saint-Rémy-de-Provence and the Villa Mabrouka in Tangiers. “Whereas Yves was about nostalgia, Pierre was about action,” Grange says. “A general, Pierre chose the best people and knew how to delegate.” Nor did he cut corners. “When I saw the expense of some of the furnishings for the Datcha, I thought ‘ooh la la’ – but it didn’t bother Pierre. He had a ‘that’s what a house like this entails’ attitude.”

Grange also recalls how Bergé was permanently on the hunt for high quality. “He bought wonderful pieces because he had that eye and just knew,” he says. According to Cox, it was the dialogue that appealed. “Pierre loved going to antique shops and enjoying that tradition, which is almost non-existent now, of walking in and conversing.” Regarding an item’s provenance, Bergé lacked that need to call a museum expert. Instead, “he put great trust in a number of dealers [such as] the Kugel brothers”, Cox says.

As with all collections, there are intriguing personal angles. Cox reveals how Bergé and Saint Laurent always consulted each other about an acquisition, whether it was a painting by Goya or a Renaissance bronze. “It was an important link between them,” Cox says. Meanwhile, shopping along the Rive Gauche, in the antiques complex the Louvre des Antiquaires or at the Village Suisse, salvaged their mutual dread of the weekend. However, Bergé’s staggering collection of books was a personal passion that “he really did not share with Yves”, Cox notes. “He started to create that when he moved to rue Bonaparte.”

The 10 Bernard Buffet paintings nod to Bergé’s relationship with the French artist during the 1950s. “In all the years I knew Pierre, he spoke very little about Buffet,” Cox says. “Since he left him to go with Saint Laurent, it was obviously a touchy subject.” No Buffets were on display in the reception rooms when Bergé and Saint Laurent lived together at the rue de Babylone. Indeed, the paintings were banished to the servants’ quarters where they were cheek-to-jowl. “Yves probably never saw them because he never went back there,” reasons Cox.

Surely, it must be odd for Cox to see all the belongings go – but he insists not. “Around four or five days before Pierre died, I got a call at around five in the morning and it was the head nurse saying, ‘Mr Cox, you better get here right away. We think this is it.’” Cox arrived at Bergé’s room, finding him seriously declined. “Pierre turned to me and said, ‘Am I dying?’ and I said, ‘Yes you are’. And he replied, ‘Well, you’re the only one who will tell me the truth, so thank you. But just remember that I am dying in peace. I am so at peace.’” And that was enough for Monsieur Cox. “I don’t need the Chinese plates,” he says. “For me, I had said goodbye… for me, he was gone.”

Natasha Fraser-Cavassoni is the author of After Andy: Adventures in Warhol Land (Blue Rider Press).

Pierre Bergé: From One Home to Another will be on view in Paris from 25–29 October. Auction: 29–31 October. The October sale is in association with Pierre Bergé & Associés.

The Library of Pierre Bergé, Part IV, will be sold by Pierre Bergé & Associés in association with Sotheby’s on 14 December at Drouot.