Out with the Old and in with the Nouveau

“T he flame that burns twice as bright burns half as long”. A quote from Lao Tzu, which perfectly captures the brief, but trail blazing period of Art Nouveau Jewelry. Emerging in the mid-1890s, the Art Nouveau movement gave the jewelers of the time the perfect excuse to break free from the mechanical and industrial jewelry that had taken hold in Europe. Thanks to jewelers such as Alexis Falize (1811-98) and Lucien Falize (1839-97), Art Nouveau jewelry was as much as a rediscovery of techniques such as enamelling, which had disappeared for centuries, as a Renaissance of naturalistic design.

During the late 1890s and early 1900s, whilst some jewelers looked to man-made architecture for inspiration, Art Nouveau jewelers found their stimulus in "a return to nature… to remind ourselves we too have a sky, fields, woods, waters, seething with birds, flowers, grasses, insects and multicoloured fish" (Lucien Falize, 1839-1997).

During the 1890s, innovative fashion and Art Nouveau jewelry synchronised in their use of sinuous lines, movement and colour. A highlight of the London Fine Jewels sale is a necklace with a detachable pendant, by Falize, which reflects this aesthetic in its use of opals, combined with vibrant enamelling and curvilinear motifs.

It is widely acknowledged that Art Nouveau jewelry did not focus on the intrinsic value of jewelry, but this is not to say that it wasn’t painstakingly long and costly to make.

Often, the make of the jewel defies its delicate and ethereal subjects. The jewelry was made to last, not be broken down, and instead be passed through the generations "as precious as illuminated parchments" (Lucien Falize). French Art Nouveau jewelers such as René Lalique (1860-1945), Henry Vever (1854-1942) and Alexis (1811-98) and Lucien Falize (1839-97) set the pace.

Whilst Art Nouveau jewelry influenced other jewelers across Europe at different times, the catalyst for many, including Lluís Masriera, was the Exposition Universelle of 1900 in Paris. Lluís Masriera took his place as the artistic director of the family jewelry business in Barcelona soon after. Bolstered by the jewels that he had seen, particularly those of Lalique, combined with his training with enamelling Master Edward Lossier in Geneva, Lluís’ first decree was that the stock of the business was sold or melted down.

In doing so, the path was cleared for his family’s jewelry house to lead Spain towards Modernism. Like the Art Nouveau jewelers, Masriera celebrated subjects that had suppressed for decades, like the female form, and seized the opportunity to create poetry through three-dimensional jewelry. The ivory, enamel and diamond pendant by Masrieia Y Carrera, depicting a Dutch girl in profile looking toward a ship, framed by fantastic creatures, embodies the Art Nouveau aesthetic of a fleeting and dreamlike moment, captured in a jewel.

Art Nouveau jewelers strived to remove the constraints of precious metals and gemstones and instead embraced a canvas created from organic materials, such as ivory, bone, tortoiseshell and horn, embellished with iridescent precious and semi-precious stones, pearls and enamels. Lluís Masriera and his contemporary Fuset Y Grau were beacons of the Catalan Aesthetic, inspired by Art Nouveau, and often used ivory in their jewels. The ivory, enamel and diamond bracelet, depicting a classical battle scene and attributed to Fuset Y Grau, illustrates the echoes of time that the Modernista craftsmen were moved by, whilst the use of ivory and enamel, gives the piece an organic lightness that contrast beautifully with the subject. 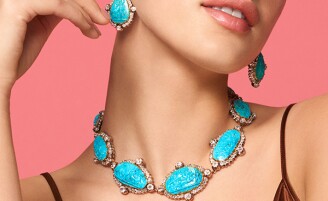